The health care system or health care to all persons, organizations, institutions, rules and processes, whose task is to promote and preserve the health and their safety through prevention and treatment of diseases and injuries is. The term health care is used to describe the extremely complex health care system for patient care and health maintenance, whereas the health industry as a whole, in addition to the inpatient and outpatient care of the sick and the prevention of illnesses in healthy people, also includes the manufacture of drugs and medical products , health tourism , wellness - as well as the fitness industry .

In Austria, the term medical services is also used for this, but this term is otherwise used specifically for emergency medical services and first aid, the military sector, disaster / civil protection, and various public tasks such as hygiene.

The following goals for a health care system can be found in the scientific literature:

In 2000, the World Health Organization ( WHO) set goals by which it measures national health systems:

In 2001 the EU Commission also defined goals for health care and care for the elderly:

The question of financing is linked to the question of which patients receive which treatment and how quickly. In the doctor's surgeries, saving - especially in the case of general practitioners at the end of a quarter, when the “points” of the practice are used up - has long since led to secret rationing . Sweden practices a system that incorporates cost-benefit considerations into medical decisions.

Those involved in a health system are

A characteristic feature of a health system is the way it is financed. There are basically three classes:

There is also the Dutch model, consisting of a health premium and an income-related contribution. 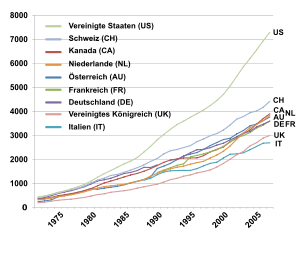 Increase in health system costs between 1970 and 2007 in various countries (in USD / head of population, source: OECD)
See also : List of countries by health expenditure

* Fulfillment of the WHO criteria compared to the resources used

Assessing the quality of health systems is difficult. For example, a high proportion of sick people in the population does not necessarily indicate poor medical care. On the contrary, a diabetic in a country with poor medical care will soon die and thus fall out of the health statistics. In a country with good medical care, however, he can live on for a long time, but is listed in the statistics as a sick person. However, a high proportion of sick people in the population is an indication that medical care is more concerned with treating symptoms than eliminating the causes. For example, the diabetic receives insulin in order to be able to continue living with his illness, but the specific causes of the dysfunction are not identified and, if necessary, eliminated. The situation is similar for a number of other illnesses, mainly caused by diet and lifestyle, which are responsible for a large proportion of care cases.

The World Health Organization has ranked the health systems of its 191 member countries. A comparison was made on the basis of the above-mentioned goals - health level, needs orientation and financial equity - on the basis of data from 1997. The study resulted in the following positions in the table above.

According to an international study conducted by the University of Washington, health improved in 167 of 195 countries from 1990 to 2015. Andorra received the best rating for access and quality of health care in 2015, followed by Iceland and Switzerland; Austria came in 13th and Germany in 20th place.

In the Deutsches Ärzteblatt , however, the study is accused of having a too small and dubious database and political coloring. It also criticizes the fact that the rankings in the individual categories of the study differ greatly.