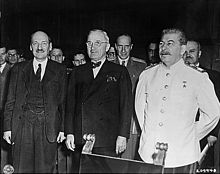 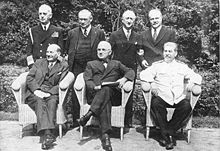 Clement Attlee was born in Putney, London, into a middle-class British family. He spent his school years at Haileybury and Imperial Service College and finally at University College , Oxford . There he studied law.

He turned to socialism after working with street children in London's East End . It was not enough for him to do good works for the poor. So he left the Fabian Society and joined the Independent Workers' Party in 1908 . Attlee became a lecturer at the London School of Economics and Political Science in 1913 . Shortly after the start of the war, he volunteered for the First World War in August 1914 . He was on the Mesopotamian front and on Gallipoli ; later he served in France in one of the few - at that time completely newly established - tank regiments , was wounded twice and had the rank of major at the end of the war .

In 1919 he was elected Mayor of the London borough of Stepney and a member of the House of Commons for the Labor Party in the Limehouse district in 1922. He became the personal advisor to the first Labor Prime Minister Ramsay MacDonald and took office in his brief first term from January to November 1924 of the State Secretary for Foreign Affairs and War Matters. In the following phase of opposition he supported the general strike of 1926. Attlee also held high offices in MacDonald's second Labor government (1929–1931): From 1930, as Chancellor of the Duchy of Lancaster, he was initially a kind of minister without portfolio before he became postmaster general was appointed Minister for Postal Services.

Attlee was appointed Chancellor of the Duchy of Lancaster in 1930 to succeed Oswald Mosley after the latter had attacked his own government for unsuccessfully fighting unemployment. After the heavy electoral defeat of Labor in October 1931, Attlee became vice chairman of the party under George Lansbury . In 1935 he became head of the Labor Party himself and remained so until 1955. He and the party opposed the appeasement policy of Prime Minister Chamberlain .

After their failure and the beginning of World War II , Chamberlain had to resign. A coalition government was formed under Winston Churchill , which was led by three interconnected bodies: Churchill was head of the War Cabinet and the Defense Committee and Attlee was his deputy in the committees and in Parliament. He also chaired the Lord President's Committee, which was responsible for civil administration during the war. Only he and Churchill stayed in the war cabinet the whole time.

The general election in 1945 brought the Labor Party in 1945, to general surprise with an absolute majority and a comfortable margin of 145 seats back to power; the election will be the largest change in voting shares between the two strongest parties in British history. This was not only reflected in the gain of 239 new seats compared to minus 190 seats for the Conservatives, but also clearly in the absolute votes that were sometimes distorted in British elections: while the Conservatives lost 11.6 percentage points, Labor practically won with 11.7 just as many for themselves. Attlee became Prime Minister, Ernest Bevin (1881–1951) became Foreign Minister. Attlee set clear goals; several reforms were carried out.

In the middle of the Potsdam Conference in the summer of 1945, he replaced Winston Churchill as British negotiator. Churchill was of the opinion that Germany should not lose too many eastern territories, especially Silesia: “If three or four million Poles are relocated east of the Curzon Line , three or four million Germans could have been relocated to the west so that they could Make way for Poland. Resettlement of eight million people is one thing I cannot support. ”But Attlee's inexperience meant that Stalin prevailed on all points, since Attlee unintentionally undermined the positions of US President Harry S. Truman .

Some industries were nationalized and the modern welfare state was formed. India became independent in 1947 (for details History of India ) and the Mandatory Palestine ended.

With the Children Act of 1948, his government established a comprehensive child and youth service in the Kingdom, which henceforth looked after disadvantaged and orphaned children.

The upheavals brought the Attlee government briefly high levels of popular sympathy. The general election on February 23, 1950 brought Labor a wafer-thin majority of 5 seats with 317 out of 625. The increase in seats for the Tories resulted, among other things, from an electoral alliance with the National Liberal Party .

In the general election in October 1951 , the small majority of the Labor Party was to be expanded. However, the financial expenditures in the Korean War over the circumstances were quoted negatively by the voters. Although Labor gained votes, with a share of the vote that exceeded that of the Conservatives by 4.5%, the latter won more seats and took over the government thanks to majority voting. Winston Churchill became Prime Minister again. Clement Attlee led the Labor Party in opposition until 1955.

After Attlee's resignation as leader of the Labor Party in 1955, he was raised to the status of a member of the House of Lords with the hereditary title Earl Attlee .

Attlee died in 1967. His ashes were buried in Westminster Abbey in London . His title as Earl went to his son Martin Richard Attlee (1927-1991). The title is now owned by Clement Attlee's grandson, John Richard Attlee . As a member of the Conservative Party, he was able to retain his seat in the upper house.

The Attlee Glacier in Antarctica is named after Clement Attlee.