The title of this article is ambiguous. Additional meanings are listed under Neville Chamberlain (disambiguation) .

Arthur Neville Chamberlain [ ˈɑːθə ˈnɛvɪl ˈtʃeɪmbəlɪn ] (born March 18, 1869 in Birmingham , † November 9, 1940 in Reading ) was a British politician of the Conservative Party , long-time British Minister of Health and from 1937 to 1940 Prime Minister of the United Kingdom. Chamberlain was its appeasement policy (appeasement) against the Nazi Germany decisively in 1938 at the Munich Agreement involved.

Neville Chamberlain was the son of the British politician Joseph Chamberlain and half-brother of Austen Chamberlain , the British Foreign Secretary and Nobel Peace Prize Laureate . From 1890 to 1897 he was a sisal planter in the Bahamas and from 1897 a manufacturer in Birmingham.

It was not until 1911 that he began his political activity as a member of the Birmingham City Council. He held this office until 1918. From 1915 to 1916 he was also Mayor of Birmingham. During the First World War Chamberlain was briefly Minister for National Labor Service in the Lloyd George administration . In this function, however, he failed due to the resistance of the trade unions against general service. With his election to the British House of Commons as a member of the Conservative Party in 1918, his political activities at the local level ended.

Political activity in the 1920s

From 1922 to 1923 he was Postmaster General of Great Britain , 1923 Paymaster General , from 1923 to 1931 (intermittently) Minister of Health. In this role, he promoted local and county government reform and enforced social legislation, which gave the Conservative Party a large following among workers. Chamberlain was Chancellor of the Exchequer from 1923 to 1924 .

Political activity in the 1930s 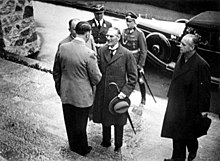 Hitler welcomes Chamberlain (right: Foreign Minister Joachim von Ribbentrop ) to his Berghof on the Obersalzberg on September 15, 1938 in the run-up to the Munich Agreement .

As Chancellor of the Exchequer, Chamberlain implemented a protective tariff policy from 1931 to 1937 and became the most important politician in the cabinets of the time. On May 27, 1937 he was appointed Prime Minister and tried to prevent another war in Europe with his policy of appeasement. Chamberlain played a key role in the Munich Agreement (September 1938), which gave Germany the right to annex the Sudetenland . Only after German troops marched into Prague on March 15, 1939 (" Defeat of Czechoslovakia "), Chamberlain decided in March 1939 to arm Great Britain and introduced general conscription. Likewise only under the influence of German war policy, Chamberlain concluded guarantee agreements with Poland , Greece , Romania and Turkey against possible German attacks. With these measures, however, he could not prevent the German attack on Poland on September 1, 1939 and thus the outbreak of World War II .

Sound recording: Prime Minister Chamberlain informs the British people of the declaration of war on Germany in a radio address on September 3, 1939.

On September 3, 1939, two days after Germany attacked Poland, the Chamberlain government declared war on Germany. However, Chamberlain's wartime government lasted only seven months, during which Britain remained largely passive in the seat- warfare .

On April 5, 1940, Chamberlain declared in a major public speech that 'Hitler has missed the bus'. His attitude of appeasement as well as the initial failures in World War II , especially against the German occupation of Norway (" Norwegian debate "), prompted Chamberlain on May 10, 1940 (the first day of the Western campaign : the Wehrmacht invaded the Netherlands, Belgium and Luxembourg) to resign. He was succeeded by Winston Churchill . Chamberlain became chairman of the Council of State and in this capacity supported Churchill's political course until his death a few months later. 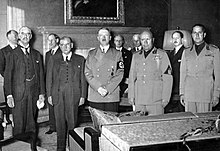 The Munich Agreement - Chamberlain, Daladier , Hitler, Mussolini , and the Italian Foreign Minister Count Galeazzo Ciano (from left) during the Munich negotiations. In the background Ribbentrop and von Weizsäcker

The way in which Chamberlain implemented the appeasement policy was critically assessed - in the history of science in particular by the British historian Frank McDonough of Liverpool John Moores University . He is considered to be an important "post-revisionist" expert on Neville Chamberlain and the politics of appeasement - together with the late historian RAC Parker .

Although McDonough shares the view that there was probably no other course of action for the British government on appeasement policy in the 1930s, unlike the revisionists, McDonough believes that Chamberlain pursued this policy inadequately: According to McDonough, it was too late and not held vigorously enough to get Nazi Germany and Hitler under control.

Chamberlain had long been in good health (apart from the occasional gout attack). From July 1940 he was in almost constant pain. He sought medical advice and was operated on at the end of July 1940. The surgeons realized that he had end-stage colon cancer . But they kept this from him and told him he didn't need any further surgery. Chamberlain resumed work in mid-August and returned to his office on September 9th. Continued pain and nightly bomb alarms (he had to go to an air raid shelter) drained his strength. So he left London - for the last time - on September 19th and went to Highfield Park. On September 22nd, he offered his resignation to Churchill (who initially hesitated to accept this offer). When it became clear to both men that Chamberlain would no longer be able to continue his work, Churchill accepted his resignation. Churchill offered him the Order of the Garter ('the highest order of British chivalry'), in which his brother had also been a member. Chamberlain refused, saying that he preferred to simply die as Mr. Chamberlain.

King George VI and his wife Elizabeth visited him on October 14th on his deathbed. The funeral services took place at Westminster Abbey ; his urn was later buried there next to that of Andrew Bonar Law .

Churchill said in an eulogy in front of the House of Commons three days after his death :

“Whatever else history may or may not say about these terrible, tremendous years, we can be sure that Neville Chamberlain acted with perfect sincerity according to his lights and strove to the utmost of his capacity and authority, which were powerful, to save the world from the awful, devastating struggle in which we are now engaged. This alone will stand him in good stead as far as what is called the verdict of history is concerned. "