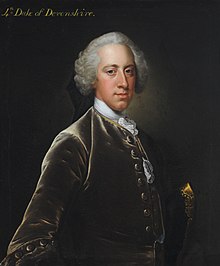 Coat of arms of William Cavendish, 4th Duke of Devonshire

William Cavendish was a son of William Cavendish, 3rd Duke of Devonshire , and his wife Catherine Hoskins. As his father's apparent marriage , he carried the courtesy title of Marquess of Hartington from 1729 to 1755 .

From 1741 to 1747 he was Knight of the Shire for Derbyshire member of the House of Commons . In 1751 he was given the title of Baron Cavendish of Hardwick , a subordinate title of his father, on the basis of a special royal resolution ( Writ of Acceleration ) . He left the House of Commons and received a seat in the House of Lords . From April 2, 1755 to January 3, 1757 Cavendish was Lord Lieutenant of Ireland . When his father died in 1755, he inherited his remaining nobility title as the 4th Duke of Devonshire . In 1756 he was appointed Knight Companion of the Order of the Garter and Chancellor of the Exchequer . He held this position until May 1757 in a government that was de facto led by William Pitt the Elder . Most historians consider Cavendish prime minister during this period.

The duke hired landscaper Capability Brown to design the gardens and gardens of Chatsworth House , his primary residence.

He was married to Lady Charlotte Boyle (1731–1754), daughter and heir to Richard Boyle, 3rd Earl of Burlington . She was a well-known architect and art collector. Through her the Devonshires inherited Chiswick House and Burlington House in London, Bolton Abbey and Londesborough Hall in Yorkshire and Lismore Castle in County Waterford in Ireland .

The following children came from the marriage: