Order of the Garter 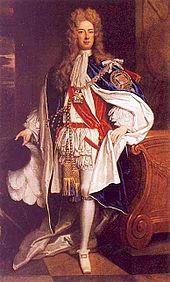 The Duke of Marlborough in the dress of the Order of the Garter. The ribbon is worn under the left knee. 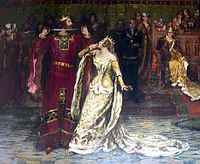 The Ceremony of the Garter (1901) by Albert Chevallier Tayler shows the legendary scene that gave rise to the Order of the Garter : King Edward III. picked up his lover's garter that she had lost and will now call it his own. 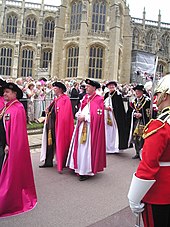 Officials of the Order (from left to right): Secretary (hidden), Gentleman Usher of the Black Rod, Herald, Registrar, Prelate, Chancellor.

Peter Carington, 6th Baron Carrington in the robes of the Chancellor of the Order of the Garter

Candidates for the order are personalities who have rendered services to the kingdom or the sovereign.

The foundation of the Order of the Garter was announced in 1344 and by the English King Edward III. Completed on January 19, 1348. The order was modeled after King Arthur 's legendary round table . With this order Eduard tried to bind the most important knights of the kingdom closer to himself, the king. One of the first knights of the order was his son Edward of Woodstock , known as "the black prince".

The English name of the Order of the Garter is Most Noble Order of the Garter , whereby garter actually refers to a stocking or knee band . The origin of the name is not clear. According to the most gallant legend, it owes its name to an incident during a dance by King Edward III. with his lover Catherine Grandison, Countess of Salisbury . She lost her blue garter. The king eased the embarrassing situation by picking up the garter and tying himself to his own leg. He is said to have exclaimed: " Honi soit qui mal y pense " (a rogue who thinks evil), the motto of the future order.

According to another tale, after the misfortune of the unfortunate Countess, the king is said to have stood in front of her with his cloak spread out and shielded her when she fastened the garter again, while, turning to the court, he said the well-known saying: "Bad to him who thinks bad ! "Should have done. On the one hand, this was a sign of his chivalrous disposition and the resulting duty to protect people in distress. On the other hand, it would be an expression of the courtoisie with which a troubadour used to worship beautiful women without sexual desire. In truth, however, the motto was more likely to refer to Edward's claim to the French throne.

The patron saint of the order is Saint George .

The order has six offices: prelate, chancellor, registrar, herald, usher and secretary. The prelate is always the Bishop of Winchester , one of the highest clergy in the Church of England . The office of chancellor is exercised by one holder of the order, currently James Hamilton, 5th Duke of Abercorn . Registrar is the Dean of Windsor Castle. The office of Herald ( Garter Principal King of Arms ) is entrusted to the head of the highest heraldic authority in England, the College of Arms . One of the other heralds of the college holds the office of secretary. The gentleman Usher of the Black Rod , usually a high-ranking retired officer who also represents the sovereign in the House of Lords , serves as the order servant .

On a Monday in June of each year, on Garter Day, the Knights of the Order gather in Windsor Castle . After a meal together in the Waterloo Chamber , everyone moves in a kind of procession, led by the sovereign, to the service in St. George's Chapel , in which every knight has his or her fixed place. Until the First World War , the flags of the German knights of the order hung in the chapel, but they were removed from the order register in 1915 due to the spreading anti-German mood. The award of the order is considered to be such a solemn act that the public or the press have no access.

This service always has the following parts:

The insignia of the single-class order consist of a chain of orders ( collane ) with the medal (The George), a breast star with St. George's cross and, at reception ceremonies, for a special costume (blue velvet robes with blue velvet hats and white feather) a blue buckle with the Motto of the order, which is worn by the men on the left knee and by the women (full members since 1987) on the left upper arm. If the collar is not put on, the gem is worn on the blue ribbon that is carried over the left shoulder. The knights, provided they are British and do not hold a higher title, are addressed with the predicate " Sir " or " Lady " and can be followed by the abbreviation KG ( Knight of the Garter ) or LG ( Lady of the Garter ) (so-called . post-nominal ).
Each knight has his own seat in the choir stalls of the chapel. Above him hang his coat of arms on an enamelled metal plate, his banner and the helmet decorations of his coat of arms. The insignia is returned to the order after the knight's death, the banner is given to the family, the helmet gems are given to the College of Arms , only the enamel plate remains in place.

Women in the Order of the Garter

In the Order of the Garter - in contrast to the great continental orders, the Order of the Golden Fleece (founded in 1430), the Order of Michael (founded in 1469) and the Order of the Holy Spirit (founded in 1578) - women could be accepted in the first century and a half of its existence . King Edward III made this clear by taking in his wife Philippa von Hainaut 10 years after the founding of the order , whereby she was not given the title of "Knight Companion of the Garter", but that of a "Lady of the Garter". In the year before his death he took his only living daughter Isabella - next to his sons Edward of Woodstock (1348, 1376), Lionel of Antwerp , John of Gaunt and Edmund of Langley (all around 1361), the youngest Thomas of Woodstock (* 1355; † 1397) followed in 1380 - also in the order.

Up to 1488 64 women were accepted into the order, whereby the focus is clearly in the reign of Edward's successor Richard II (King 1377-1399) or the reign of his guardian John of Gaunt: 35 of these 64 admissions alone are in these years It should also be noted that "only" 33 men were accepted into the order at the same time. Almost four fifths of the women, 27, were accepted in just four years, 1378, 1384, 1386 and 1399, while the acceptance of the 33 men was continuous over the entire period. Under Richard's successor, Henry IV, another 9 women were added in 1408, after which the influx dried up: from 1420 to 1488 there were only 17 women in 68 years, and at the end of the century the order became pure again Men's society - which was not changed by the fact that England was ruled for a long time by women (including Elizabeth I , Victoria ) in the following centuries . Only with the admission of Alexandra of Denmark , the wife of Victoria's son and successor Edward VII. In 1901, this situation ended.

Members of the order

→ Main article : List of wearers of the Order of the Garter

Commons : Order of the Garter  - album with pictures, videos and audio files