Margrethe II of Denmark – pronunciation: [mɑˈg̊ʁeːɪ̯d̥ə] , Margrethe Alexandrine Þórhildur Ingrid – (born April 16, 1940 at Amalienborg Palace , Copenhagen ) has been the reigning queen since January 14, 1972 and thus head of state of Denmark ( Danish Danmarks Dronning ), the Faroe Islands and Greenland . She comes from the House of Schleswig-Holstein-Sonderburg-Glücksburg , a branch line of the House of Oldenburg . A change in the line of succession made Margrethe Crown Princess on March 27, 1953.

Princess Margrethe was born on April 16, 1940 at Amalienborg Palace in Copenhagen . She was the eldest daughter of the Danish Crown Prince Frederik and his wife Ingrid of Sweden . The reigning monarch was her paternal grandfather, Christian X.

At the time of her birth, Denmark was under German occupation . Margrethe is the last Danish princess who also received an Icelandic first name with the name Þórhildur : Iceland was part of the kingdom until the declaration of independence in 1944. After her father was proclaimed king in 1947, her uncle Knut of Denmark was the heir to the throne before a change in the constitution in 1953 made female succession possible.

After graduating from the private grammar school N. Zahles Skole in 1959, she studied prehistoric archeology at the University of Cambridge in 1960/61 and political science at Aarhus University in 1961/62 . In 1963 she moved to the Sorbonne in Paris and in 1965 to the London School of Economics and Political Science . In addition to her native Danish language , Margrethe is fluent in English , German , French and Swedish , as well as some Faroese .

From the connection two sons emerged:

Margrethe II is the sister of Princess Benedikte zu Sayn-Wittgenstein-Berleburg and Anne-Marie of Greece . 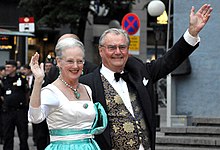 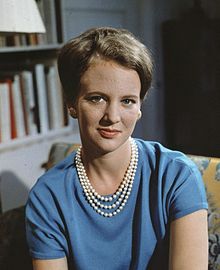 Margrethe II is the Danish head of state. Every law requires their signature in order to be valid; this must be countersigned by a minister. The Queen appoints and dismisses the head of government according to parliamentary majorities. She is regularly informed about the current political situation by the Prime Minister and the Foreign Minister. However, the Queen has no influence on day-to-day politics and never publicly takes a position on political issues.

Margrethe II enjoys a high reputation among the Danish people. She takes her representative duties very seriously. It makes up to three state visits abroad each year and usually receives just as many heads of state in Denmark. There are also annual visits to Greenland and the Faroe Islands .

The Queen 's New Year's speech will be broadcast live from Amalienborg Palace on New Year's Eve at 6 p.m. The Danish head of government, on the other hand, traditionally speaks on New Year's Day .

Queen Margrethe is patron of over 100 organizations in Denmark and ten organizations abroad. She is also active as chairwoman of various foundations .

Queen Margrethe is closely associated with the Royal Life Guards (Danish: Den Kongelige Livgarde ). Once a year, as the high point of the closing parade, she presents a wristwatch ( Dronningens Ur (Queen's watch)) as a personal honor to a retiring conscript of the Royal Life Guards who has distinguished himself particularly during his service.

Margrethe has also gained notoriety as a graphic designer , painter and translator . She has designed various postage stamps and illustrated numerous books, including the 1977 Danish edition of The Lord of the Rings , under the pseudonym Ingahild Grathmer . She has designed church vestments, theater costumes and stage sets. In 2009, she designed costumes and sets for a film for the first time, The Swans , based on the Hans Christian Andersen fairy tale of the same name. Numerous exhibitions of her works at home and abroad bear witness to her recognition as a painter. On October 2, 2016, Margrethe presented an altar hanging designed by her as a gift for the reopening of the restored Castle Church in Wittenberg .

Margrethe II has repeatedly worked as a translator since 1981. She has already translated works by Simone de Beauvoir (together with her husband Prince Henrik), Stig Strömholm and Eric Linklater into Danish .

Queen Margrethe is a member of the Danish People 's Church and thus Evangelical Lutheran . She is a believer and has acquired a comprehensive theological education. In the 1970s, Count Hans Schack, who was interested in theology, set up a theological study group for her at Schackenborg Castle . Pastors , bishops and professors of theology attended these meetings and discussed church rituals, religious scriptures and church history with the Queen. On Sundays, Margrethe II appears unannounced in various churches across the country to take part in the service .

The Queen's official residences are Palais Schack ( Palace Amalienborg ) in downtown Copenhagen and Fredensborg Palace outside Copenhagen. During the summer she traditionally stays for a few weeks at Gravenstein Castle near Sønderborg (German: Sonderburg), the widow's seat of her mother Ingrid , who died in 2000 . She also regularly uses Marselisborg Palace near Aarhus , where the royal family often gathers during the summer holidays and at Christmas. She also has the royal yacht Dannebrog as her official residence for visits within and outside of Denmark . The official residences also include Castle Sorgenfri near Copenhagen, which has not been used by Queen Margrethe until now, but most recently by her cousin Count Christian von Rosenborg (1942-2013) and his wife Anne Dorte (1947-2014). Privately, the royal family maintains the castle of Château de Cayx in France.

Her first state visit was to Sweden in 1973, where she was received by her maternal grandfather, King Gustav VI of Sweden.

The designer Sigvard Bernadotte , a maternal uncle, named his Margrethe mixing bowl after her in 1950.

Her heavy consumption of cigarettes in public was controversial. She reportedly smoked up to 60 cigarettes a day, earning her the nickname "Vulcan Queen " on the tabloids . However, since 2007 she is said to have cut back on tobacco smoking .

On September 4, 2019, Queen Margrethe arrived on board the state yacht Dannebrog for a four-day visit to the port of Flensburg . The occasion was, among other things, the start of the official celebrations for the 100th anniversary of the establishment of the German-Danish state border .

Margrethe II is related to many European monarchs, e.g. B. is her closest relative Carl XVI. Gustaf of Sweden who is her first cousin. Then follows Harald V , who is her second cousin, and Elizabeth II , who is her third cousin.