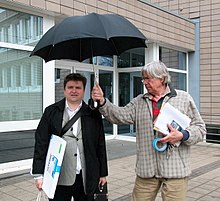 Quite literally: The artist Andreas Paeslack and Bazon Brock in 2004 as patrons of the project "In the name of art"

As a patron or patroness or (in Switzerland ) patron and patronage ( Austria ), occasionally protector or shield woman , in today's parlance, a (usually is prominent ) personality or an organization referred to by their names one event or a non-profit organization supported.

The benefit may be an image gain for both sides. However, some patrons also support with active advertising and use their good contacts to gain further supporters. However, unlike advertising or sponsoring  , patronage is usually not associated with a flow of money.

According to Grimm , who uses the word synonymously for Patronus , a patron is a person who “exercises protection over a city, country and the like or over a person”.

In the Middle Ages , a patron was a nobleman who granted military protection to a social, religious or economic group in return for payment of the patronage . For example, this could be a monastery whose military ability was limited, but also a guild or the Jewish community (see Protective Jew ) of a certain area.

This protection was not always actually provided, or could take the form of pure protection money payments .