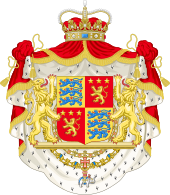 Henri was born the second of nine children to Renée Doursenot (1908-2001) and André de Laborde de Monpezat (1907-1998). He spent his early years in Indochina , where his wealthy father had inherited several industrial companies. In 1939 his family returned to France to the Le Cayrou parent company in Cahors . Henri went to the Jesuit convent school in Bordeaux until 1947 and attended the high school in Cahors from 1948 to 1950. In 1950 he went to Hanoi and was a student at the French grammar school in Hanoi until 1952. From 1952 to 1957 he studied law and political science at the Sorbonne in Paris , then French literature, Chinese and Vietnamese at the École Nationale des Langues Orientales . He continued his language studies in 1957 at the University of Hong Kong and in 1958 with a study visit to Saigon .

He served his military service in the infantry in Algeria from 1959 to 1962. 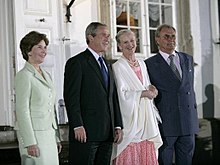 Prince Henrik and Margrethe II (right) with George W. Bush and his wife Laura at Frederiksborg Castle in July 2005

As the secretary of the French embassy in London , Henri met the Danish Crown Princess Margrethe . They married on June 10, 1967. For marriage he converted from the Catholic to the Evangelical Lutheran faith, became a Danish citizen and took the name Prince Henrik of Denmark (Danish: Henrik, Hans Kongelige Højhed Prinsgemalen - title: HKH Prins Henrik af Danmark ). Together they had the two sons Crown Prince Frederik (born May 26, 1968) and Prince Joachim (born June 7, 1969).

In an autobiography, Henrik wrote about his first years in Denmark:

“A few months after I arrived, everything I did was criticized. My Danish was swaying, I preferred wine instead of beer, silk stockings instead of knitting socks, Citroën takes Volvo , tennis instead football . Even for the Gauloises , whom I smoked instead of Virginia tobacco and who had the reputation in this country of being the brand of socially critical intellectuals , I couldn't hope for indulgence. I was different. I seemed satisfied with this position and not ashamed of myself. There were two mistakes! "

Prince Henrik was a regatta sailor in the kite class in his spare time until 2012 . In addition, the Prince Consort was an avowed wine lover and produced his own wine grapes in the vineyards of Château de Cayx near Cahors . He was involved in nature conservation and was President of WWF Denmark. Prince Henrik wrote poems that met with divided echo.

Prince Henrik publicly criticized the discrimination against husbands of ruling queens. He hoped men would have the same rights as girls, he told the Ekstra Bladet newspaper in 2009 after a referendum abolished the priority of princes over their sisters. In 2015, in Le Figaro , he repeated his call for more protocol equality in the royal family and brought the title of King Consort into play.

In 2016 he largely withdrew from his representative duties and thereby also gave up the title of Prince Consort . However , he retained numerous patrons . At the beginning of August 2017, the Danish royal family announced that, contrary to previous plans, Prince Henrik did not want to be buried next to his wife in Roskilde Cathedral as planned .

Exactly four weeks after this announcement, the Danish royal family announced that Prince Henrik was seriously ill. A team of specialists from Rigshospitalet who examined him in late summer had come to the conclusion that he was suffering from dementia . It was also announced that Prince Henrik would resign honorary posts and patronage to the appropriate extent due to the illness. At the end of January 2018, he was hospitalized again, where a benign lung tumor was discovered. He died on February 13, 2018 at Fredensborg Palace.

Prince Henrik was involved in numerous organizations that promote economic, scientific, cultural, ecological and social interests. In addition to his presidency of WWF Denmark, he was chairman of various foundations and committees. In addition, Prince Henrik was a board member of the Royal Danish Collection, which includes several museums, and of the Dronning Margrethes og Prins Henriks Fund , which supports scientific, cultural and social projects. In addition, Prince Henrik was the patron of around 70 organizations. These included the Danish-French trading company, the Albert Schweitzer Committee Denmark, the craft and industrial fair, the Danish Red Cross , the Danish-Chinese Economic Forum and the like. v. a.

Frederik Magle's Symphonic Suite Cantabile is based on Prince Henrik's book of poems of the same name.

“I see poetry as an opportunity to deepen, in a superficial time, shaped by news and entertainment that leave us rootless and restless. Poetry brings us closer to the true essence of the world, in poetry one can approach the eternal questions about love, loneliness and death. "

Sculpture Torso of Prince Henrik in the park of Marselisborg Castle

Prince Henrik studied with the sculptor Poul Holm Olsen in the 1970s. A number of small mythical animals and abstract figures emerged. One of the works, an abstract female torso, was placed in the sculpture park of Marselisborg Castle . In 2002, the newspaper Jyllands-Posten invited Jens Erik Sørensen, director of the ARoS Aarhus art museum , for a tour. Without knowing who the artist was, he described the work: “A surprising combination of classical and antique and somewhat robot-like science fiction. It's not an uninteresting angle. It is also a sculpture that is not so easily accessible. It takes a lot of thought to understand it in its entirety. ”He later remembered the sculpture and exhibited it in 2009 at the Sculpture by the Sea exhibition in Århus . This was Prince Henrik's baptism of fire as a sculptor, and he received harsh criticism from the established art scene. Later, a number of the smaller sculptures were cast in bronze and preferably placed in the royal palace gardens. The portrait of Queen Margrethe II with the title Dronning is open to the public on the lake of the royal summer residence in Gravenstein Castle . In 2015, Prince Henrik sold a bronze sculpture entitled Fabeltier (Danish Fabeldyret ) for the first time . In July of the same year, Prince Henrik presented his first major solo exhibition in the Augustiana Gallery in Augustenborg Castle on the island of Alsen .

Prince Henrik was a very good pianist . On March 8, 1970 he played the 2nd movement of Beethoven's Piano Concerto No. 3 with the Copenhagen Royal Orchestra, conducted by his father-in-law King Frederik IX. At the opening of the concert hall of the Danish Radio ( Dansk Radio Koncerthuset ) in January 2009, Prince Henrik conducted the Symphony Orchestra of the Danish Radio ( DR Radiosymfoniorkestret ).

In 2013 he embarked on an unconventional collaboration with the rock band Michael Learns to Rock . He played the piano in a recording for the number Echo .

Prince Henrik amassed an extensive private collection of oriental jade art over several decades . The collection, which comprises several thousand parts, is distributed among the royal castles of Fredensborg, Amalienborg and his ancestral home, Château de Cayx in France. In 2017, Prince Henrik personally presented his collection to the public at the Koldinghus Museum in Kolding under the title Himmelssteine .