This article or the following section is not sufficiently equipped with evidence ( e.g. individual proofs ). Information without sufficient evidence could soon be removed. Please help Wikipedia by researching the information and providing good evidence. 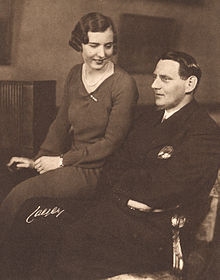 Frederic IX. was the eldest son of Christian X of Denmark and Alexandrine of Mecklenburg-Schwerin . In 1921 Frederik became engaged to the Greek Princess Olga , daughter of Prince Nikolas and Princess Helena of Greece. The engagement was broken off without further explanation, and Olga married the Yugoslav Prince Paul .

On March 15, 1935, he became engaged to Ingrid of Sweden , daughter of the later Swedish King Gustav VI. Adolf and the British Princess Margaret of Connaught. The couple married on May 24 of the same year at Sankt Nikolai kyrka in Stockholm. The wedding was one of the biggest media events of the year. Among the wedding guests were the groom's parents, King Christian X and Queen Alexandrine, King Leopold III. of Belgium and his wife Queen Astrid and the Crown Prince and Princess Olav and Martha of Norway. The newlyweds moved into the Brockdorff Palace, which is part of the Amalienborg Palace ensemble of buildings .

Frederik ascended the Danish throne after the death of his father in 1947. Since the law of succession at the time only provided for male heirs and Frederik was the father of three daughters, his brother Knut became Danish crown prince first . An amendment to the Act of Succession in 1953 allowed Frederik's daughter Margrethe to succeed him on the throne in 1972.

The king had a great love for music. He was a talented pianist and conductor. Several recordings of orchestral music conducted by Frederiks IX. on Danish Radio have been preserved and published on CD.

He was buried outside Roskilde Cathedral in a newly built burial place.

In 1935 Crown Prince Frederik married his third cousin Princess Ingrid of Sweden (1910–2000). They had three daughters:

On the occasion of the silver wedding of the royal couple Frederik IX. and Ingrid a commemorative coin worth 5 crowns was minted in 1960.