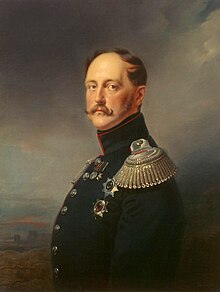 Nikolaus was the third son of Emperor Paul I and his second wife, Maria Fjodorovna, née Princess Sophie Dorothee von Württemberg . During the reign of the eldest brother Alexander I he stayed away from all state affairs . In 1814/15 he made his grand tour through several European countries. After he became Charlotte of Prussia on July 13, 1817 , eldest daughter of King Friedrich Wilhelm III. von Prussia , married, he lived with his family in the Anitschkow Palace in Petersburg. His official duties were limited to the military service in a garrison, whereby he held the rank of chief inspector of genius (at that time designation for pioneer or engineering troops ).

When Alexander I died on December 1, 1825, he left no sons, so that Nicholas was completely unexpectedly confronted with taking over the government, since the second oldest brother Constantine had renounced the succession to the throne due to an improper marriage. On December 24th, Nicholas formally took over the government and was crowned emperor on September 3rd, 1826 in Moscow .

He resolutely suppressed a military conspiracy by the Decembrists that had been prepared for years and broke out on December 26, 1825. Nicholas began to establish an authoritarian regime immediately after taking over power , even if he initially retained his brother's ministers. In doing so, he relied on an extensive bureaucracy , above all on the extremely effective secret police under Alexander von Benckendorff , as well as on the army , the Orthodox Church and a publicly promoted Russian nationalism. Among other things, the adjutants general were given access to the files at all authorities, an account of the administration, and presentation of the bills. This placed the civil administration under military supervision. The emperor's personal advisory staff consisted almost entirely of high officers. The exclusively military-oriented upbringing of Nicholas may have contributed to this development.

In 1826, Nikolaus refused to abolish serfdom . It is true that a ukase ordered the various local authorities to ensure that the body owners should not demand “anything excessive” from their peasants; but because of the corruption of the authorities, the ukase remained ineffective, and even the laws later passed to facilitate serfdom did little to improve the nature of self-bondage.

Nicholas issued a number of repressive regulations against the Jews in Russia . For example, there were forced recruitment of young Jewish men and children who were committed for up to 25 years and who were confronted with massive attempts at conversion during this time . In addition, many forms and attempts at Jewish self-organization were prevented. During Nikolaus' reign pogroms began, which were the forerunners of the anti-Jewish excesses in the Russian Empire at the end of the 19th century.

The Russification of the various nationalities was accompanied by attempts to systematically convert Protestants and Catholics to the Orthodox Church ; even the Greek Uniate Church had to allow its union with the Orthodox in 1840.

Despite or because of this massive repression, oppositional movements of various orientations began to form under Nikolaus.

The formative figure in Nikolaus' foreign policy was Minister Karl Robert von Nesselrode . Under him, as inside, the focus was on the suppression of revolutionary movements throughout Europe and Asia.

In the early years of Nicholas' rule, foreign policy was primarily directed towards Asia and the conquest of Turkey . The Russo-Persian War brought Russia a significant increase in territory in the Treaty of Turkmanchai (February 22, 1828). In 1828 he started the war against Turkey , where he, although he did not lead the command, participated themselves and the Russian Federation in 1829 in the Treaty of Adrian Opel the east coast of the Black Sea , the free traffic on the Danube , the Black Sea and in the Mediterranean and as a further consequence brought in the establishment of the Greek kingdom . The Polish uprising was suppressed in nine months of devastating struggle in 1831.

The growing influence of Russia in the Orient was particularly evident when the Sultan of the Ottoman Empire, Mahmud II, de facto submitted to Nicholas in the Treaty of Hünkâr İskelesi in 1833 and asked him for help against the rebellious Pasha of Egypt Muhammad Ali . In Europe, Nicholas saw himself as the protector of the existing monarchical order and in 1833 revived the Holy Alliance .

However, various alliances with almost all European states proved to be unsustainable when Nicholas tried to conquer Turkey in 1853. Great Britain and France went against him in the Crimean War , no other power supported Russia. The army organization of Russia proved to be insufficient, the incursion into Turkey failed, the Crimea was attacked by the allies and the Russian army was defeated in the Battle of Alma and the Battle of Inkerman . Before the end of the fighting, Nikolaus I , who had meanwhile suffered from chills and pneumonia, died on February 18th July. / March 2, 1855 greg. .

From his marriage to Charlotte of Prussia , Nicholas I had seven children:

According to Nicholas I, the plant genus is Nicolaia Horan. named from the ginger family (Zingiberaceae).