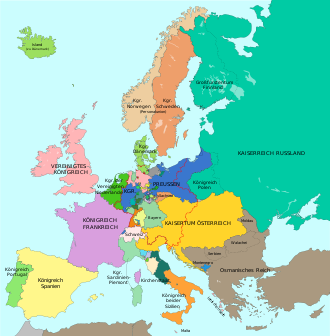 The term Holy Alliance (russ .: Священный союз, Swjaschtchennyj Soyuz , Fr .: La Sainte-Alliance ) refers to the alliance , the three monarchs of Russia , Austria and Prussia after the final victory over Napoleon Bonaparte on 26 September 1815 in Paris abschlossen . France joined the alliance in 1818.

As early as 1814, Robert Stewart asked for regular meetings of the Pentarchy Powers , which, together with the suggestion of Tsar Alexander I , who had made the first advances in London in 1804, led to the establishment of the Holy Alliance. It was also Alexander I who drafted the treaty. The alliance came about even though all three monarchs belonged to different Christian denominations: the Russian tsar was Orthodox , Emperor Franz I of Austria was a Roman Catholic and King Friedrich Wilhelm III. of Prussia Protestant . Almost all European monarchs gradually joined, with the exception of the King of England and the Pope.

Founding declaration of the Holy Alliance of September 26, 1815

“In the name of the holy and indivisible Trinity! Their Majesties, the Emperor of Austria, the King of Prussia, and the Tsar of Russia, as a result of the great events that have befallen Europe in the past three years, and especially of the favors that Divine Providence has poured out on the states, have their governments Having placed their trust and hopes in them alone have become convinced that it is necessary to base their mutual relations on the sublime truths taught by the incorruptible religion of the Divine Savior. They, therefore, solemnly declare that the present agreement is only for the purpose of demonstrating to the world their unshakable resolve, as the guideline for their conduct in the internal administration of their states, as well as through the commandments of justice alone in political relations with any other government , of love and peace, which, far from being applicable only to private life, should even more directly influence the resolution of the princes and guide all their steps so that they lend duration to human institutions and remedy their imperfections. "

The core idea of ​​the Holy Alliance was to secure an "Eternal Peace" through the consistent self-commitment of all European monarchs to the principles of Christian charity. The princes had thought of a large princes' league in which the principles of Christianity should apply as the highest law of national life. Both in the government of their states and in their domestic and foreign policy, the three monarchs declared themselves ready to adhere to Christian principles. At the end of the document, which was signed by all monarchs, there is also a request to all Christian princes of Europe that they should join the Holy Alliance.

The invitation to join the alliance was followed by all states of the continent except for the Papal States , which rejected interdenominational engagement, the Ottoman Empire (which was not allowed to join because of the Christian orientation of the alliance) and Great Britain : Although the Prince Regent, George IV. , personally approved and also joined in his capacity as King of Hanover, Great Britain stayed away, however, because the alliance only contained a commitment to abstract principles, but no real obligations. Under Metternich's leadership, it became the tool of the reactionary powers against the national and liberal currents of the population.

The later effectiveness of the federal government on external and internal state life during the so-called restoration epoch consisted, however, in the fact that a common congress and intervention policy prevented not only the revolution but also the formation of liberal institutions. This policy of oppression came less from Russia than from the Austrian Minister Metternich. A complete easing came from events like the Greek riots.

The Holy Alliance began to break down in the 1820s due to differences between the European rulers over the freedom struggle of Greece and Belgium . Nevertheless, the solidarizing element of the royal houses remained until the First World War .

The signatories of the alliance acknowledged the divine right of rulers and described the Christian religion as the foundation of the ruling political order. They committed themselves to mutual assistance to protect this order against all civil and national upheavals. Almost all European monarchs joined the treaty in the following years.

The executive body of the Holy Alliance was the quadruple alliance concluded on November 20, 1815 between Russia, Great Britain, Austria and Prussia , which, among other things, provided for regular meetings of the contracting powers and was expanded to the pentarchy through the admission of France following the congress of Aachen on November 15, 1818 . The Pope, however, remained firmly convinced that the Holy Alliance was only an attempt by the Tsar to lead the various peoples theocratically.

Interventions against civic and national aspirations

At the Aachen Congress in 1818, the Holy Alliance discussed suppressive measures against the bourgeois-national opposition in the German Confederation (see Karlsbad Resolutions ). At the monarchs' congresses in Troppau and Ljubljana , military interventions against the bourgeois upheavals in Italy and indirect support for Turkey against the Greek national liberation struggle were decided. The last congress of the Holy Alliance, the Verona Congress in 1822, tasked France with suppressing the bourgeois revolution in Spain .

Reorganization after the July Revolution

With the July Revolution of 1830 in France, the Holy Alliance lost its pan-European character and influence. In the fall of 1833, Russia, Austria and Prussia reactivated the Holy Alliance at the Münchengrätz Conference and from then on formed the bloc of power that is often referred to as “reactionary” - a designation that is incorrect insofar as the interests of these states are only partial were the same and this "camp" was therefore by no means uniform.

After the Holy Alliance had seen a new edition in the 1950s after the suppression of the revolutions of 1848/49, it finally broke up in the Crimean War . Austria, which was only saved from the seemingly possible disintegration with the help of Russia during the uprising of the Hungarians in 1849 , had asked Russia on June 3, 1854 to withdraw from the Danube principalities and occupied them after the Russian withdrawal. Relations between Austria and Russia were therefore shattered. Austria's relations with Prussia also grew strained. In addition, there was a risk of Great Britain and France under Napoléon III. to be isolated. In the long term, the constellation of European powers, which has seemed relatively stable since the Congress of Vienna (apart from the many internal unrest in the respective states), changed permanently to the detriment of Austria.

Karl Marx and Friedrich Engels saw the dissolution of the Holy Alliance through the common struggle of the revolutionary peoples as the decisive prerequisite for the implementation of bourgeois democracy in Europe.

In 1946, looking back on two world wars , the author Felix Dassel regarded the Holy Alliance as a keen assessor of the coming dangers of European development. At the same time, historiography cannot ignore the insight that the alliance was more capable of intellectual knowledge than of preventive action. Coming disasters have been foreseen, but tried to prevent them with ineffective means.