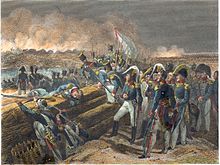 The French Invasion of Spain marked a French military intervention in Spain in 1823 to crush the Spanish Revolution with the aim of helping King Ferdinand VII to regain power.

During the Spanish War of Independence , a general parliament met in Cádiz in 1810 and in 1812 proclaimed a liberal constitution , the La Pepa , which, however, was abolished two years later under Ferdinand VII.

In January 1820, a mutiny in Cadiz turned into a nationwide revolt in Spain . Their goal was to bring the liberal constitution of 1812 back into force. King Ferdinand VII was forced to give in to the insurgents under the leadership of Lieutenant Colonel Rafael del Riego y Núñez . On March 10th he published the Manifiesto del Rey a la Nación española (Manifesto of the King to the Spanish Nation), in which he called on the Spaniards "... let us be clear, and I be the first, on the path of the Constitution ...". He put the constitution and many laws that had passed the Cortes of Cadiz back into force. He convened the Cortes and formed a government of Liberal Ministers who were former members of the Constituent Assembly of 1812. This turn in Spanish politics was felt by the members of the Holy Alliance as so unheard of that they could only explain it by saying that the king must be in the captivity or at least in the spiritual captivity of revolutionaries. This version was also circulated by a Spanish counter-government, the Regencia de Urgel , which campaigned for the reintroduction of the absolute rule of Ferdinand VII. Therefore, the Holy Alliance (an alliance between Russia, Austria and Prussia, which was expanded to include France in 1818) commissioned France at the Verona Congress in 1822 with a military intervention in Spain to free Ferdinand VII and restore his absolutist rule.

On April 7, 1823, French forces crossed the Pyrenees under the command of Louis-Antoine de Bourbon, Duke of Angoulême , the son of the later King Charles X. Charles Albert , Prince of Carignano and later King of Sardinia-Piedmont, was among the French . The Spanish name for this French troupe is Cien Mil Hijos de San Luis ('Hundred Thousand Sons of St. Louis').

The Duke divided his powers and had the city of San Sebastian besieged while he began his attack on Madrid, which was occupied by revolutionary forces. On May 23, the revolutionary government withdrew from Madrid and fled to Seville. The military commander of Madrid surrendered in secret and fled to France. He left his troops behind, who without a leader could not stop the French army. The city was captured and a conservative royalist was installed until the return of Ferdinand VII.

The French army moved further south to besiege the revolutionary militias under Colonel Riego in Cádiz. Ferdinand VII was also held there by the Cortes Generales , the Spanish parliament.

On August 31, 1823, Riego's militias were defeated in the Battle of Trocadero near the fortress of the same name and opened the way to Cádiz for the French army. Cadiz fell on September 23, 1823. After an announcement that the revolutionaries would be released, Ferdinand VII was released and returned to the Spanish throne.

As early as October 1st, Ferdinand VII suspended the promised amnesty and other legislative changes of the past three years and ordered unscrupulous retaliation against the revolutionaries.

After the revolt was suppressed, Ferdinand VII ruled until his death in 1833. He changed the inheritance law in favor of his daughter Isabella, who was born in 1830. After his death on September 29, 1833 in Madrid, this led to several wars of succession to the throne, the Carlist Wars (see Carlism ), which were caused by his brother Don Carlos.

The campaign had a major impact on foreign policy. Great Britain, which already abstained from its vote during the Verona Congress, used these developments as an opportunity to renounce the Holy Alliance and recognize the South American states that had fallen away from Spain.

The proclamation of the Monroe Doctrine against the intervention of European forces in South America is partly based on these events.