The title of this article is ambiguous. Further meanings are listed under Evangelical Church (disambiguation) .

The view into the nave of the castle church in Wittenberg

The castle church in Torgau , at Hartenfels Castle , is the first new Protestant church in the world. 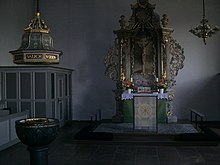 Altar of the Evangelical Lutheran church building in Flensburg-Adelby

As a Protestant church call themselves churches in the tradition of the Reformation . The term Protestant Church is also used largely synonymously .

The term was already used in the Middle Ages, including in the church-critical slogan Vita evangelica et apostolica . During the Reformation, the term evangelical (i.e. according to the biblical message of the gospel ) was deliberately used critically in opposition to the Catholic Church. The term was used by Martin Luther to denote his teaching and his followers after they were referred to as Lutherans. He firmly refused to use this name after himself. In the self-understanding of the Evangelicals, their doctrine of faith is different from that of the Roman Catholic Church based directly on the Gospel .

In the course of confessionalization , the term “Protestant Church” becomes the generic term for Lutheran and Reformed churches . After the Peace of Westphalia, the Corpus Evangelicorum also made the term a constitutional term for both groups . Many of the independent free churches also describe themselves as Protestant . The term " Protestant Church ", which is often used synonymously, referred to the historical Speyer protestation of the evangelical princes at the Diet of 1529 in Speyer .

The term "evangelical" must be distinguished from the relatively new term evangelical , which was transferred back into German from the English-language "evangelical" and is used here to denote a certain movement within (and outside) the (Protestant) churches.

The common denominator of the Protestant churches are the "four solos" of the Reformation:

Other Protestant churches in the Netherlands, some of which do not have the term Protestant in their names, see also the list of Dutch Reformed Churches

Community of Protestant Churches in Europe