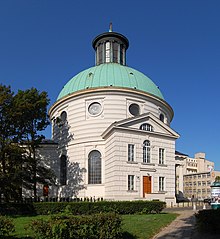 The name of the Polish Evangelical Augsburg Church refers to the " Confessio Augustana " written by Philipp Melanchthon for the Reichstag in Augsburg in 1530 , which together with Melanchthon's apology formulates the basis of Evangelical Lutheran doctrine. 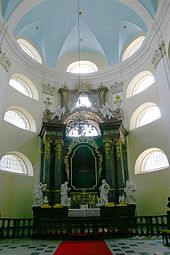 The Evangelical Augsburg Church in Poland today has around 61,000 parish members, the majority of whom live in Teschen Silesia . 181 clergy look after 133 parishes, which are grouped into six dioceses .

The spiritual head of the church is the leading bishop of the Evangelical-Augsburg Church in Poland. He is also the President of the Consistory. The incumbent is Jerzy Samiec . The bishopric is Warsaw (00-246 Warszawa, ul.Miodowa 21). The Trinity Church there (Kościół Św. Trójcy) is the main and episcopal church.

The term " bishop " was only introduced in 1938; previously the title was general superintendent , and "bishop" was just an honorary title.

The first synod after the Second World War met in 1950. The synod, whose term of office is five years, decides on all important matters of the church, sets the goals and watches over orthodoxy. She is the author of all the laws and ordinances of the Church that regulate activities at the parish level, the diocesan level and the Church as a whole.

President of the Synod

The consistory exercises the highest administrative and administrative power. The seat is in Warsaw (00-246 Warszawa, ul.Miodowa 21). The Consistory is chaired by the Senior Bishop, while Adam Pastucha is currently Deputy Chairman .

There are the following dioceses:

The basic administrative unit of the Evangelical Augsburg Church is the parish (Polish: "parafia"), which as a local church has all the characteristics of the Church of Jesus Christ. She is the people of God and called to the testimony of faith. The spiritual leaders of the parishes are the pastors.

The Evangelical Augsburg St. Peter and Paul Church in Pabianice

The Evangelical Christophori Church in Breslau

The Evangelical Augsburg Church in Poland has been a member of the Lutheran World Federation (LWF) since 1947, a fellowship of around 150 Lutheran churches in more than 70 nations. She is also a member of the Community of Protestant Churches in Europe and the World Council of Churches.

The Evangelical-Augsburg Church is also a member of the Polish Ecumenical Council , to which the minority churches of Poland joined together in 1946.

There is a cooperation with the Roman Catholic Church in Poland that is still worth expanding.

There are partnerships between Polish dioceses and German regional churches:

Lutheran congregations in the 16th century

See also : “History” in the article: Protestantism in Poland

The first Lutheran sermons were probably given in Gdansk as early as 1518 . In the following years Lutheran congregations were formed first in the cities of Royal Prussia (Danzig, Thorn , Elbing ) with a predominantly German population and in the larger cities of Greater Poland . It was worn by citizens, scholars, some nobles and parts of the common population. In the Duchy of Prussia , which was a feudal part of the Kingdom of Poland , Duke Albrecht was the first sovereign to introduce the Reformation in 1525. The Reformation was also introduced in 1534 in the Duchy of Pomerania , which was then part of the Roman-German Empire .

The Polish King Sigismund I tried to prevent Reformation activities in the Kingdom of Poland with several edicts. After 1548 the public activities for Protestants in Poland improved under the new King Sigismund II August . Other nobles converted to the Lutheran creed and even formed a majority in the Sejm with the Reformed (Calvinist) representatives .

In 1573 the Edict of Tolerance of the Confederation of Warsaw was passed, which guaranteed all persons in Poland-Lithuania full religious freedom.

In 1555 there was a union synod of Reformed and Bohemian Brethren in Kozminek ; the union was soon followed by the Lutherans. Overall, however, there was no lasting agreement.

Counter-Reformation in the 17th and 18th centuries

Since 1575, the kings again clearly took the Catholic side and pushed back the Protestant communities in Poland-Lithuania. In 1717 their religious practice was also restricted by law. In 1724 resisting Lutherans were executed in Thorn. In 1767, the Thorn Confederation sought to formulate the demands of the Lutheran and Reformed (Calvinist) nobles, which led to the Warsaw Treatise of 1768, which again guaranteed them extensive religious freedom. During this time the Trinity Church was built in Warsaw , where Lutheran services could take place again.

In the Treaty of 1707, the Holy Roman Emperor Joseph I, as Duke of Silesia and King of Bohemia, allowed the construction of six churches, the so-called "Gnadenkirchen" in Freystadt (now Polish: Kożuchów ), Hirschberg ( Jelenia Góra ), Landeshut ( Kamienna Góra ), Militsch ( Milicz ), Sagan ( Żagań ) and Teschen ( Cieszyn ). Maria Theresa granted German-speaking Lutheran colonists settlement in the countries of East Galicia and in 1775 allowed them to celebrate Protestant services in their homes. Her son Joseph II issued a tolerance patent on October 3, 1781 , whereby Protestants and Catholics were treated on an equal footing and Protestant churches were given legal personality. A consistory for the parishes of the Augsburg and Helvetic Confessions was formed in Teschen , which was moved to Vienna in 1784.

After the partitions, Poland was divided among Prussia, Russia and Austria. The influx of Protestant farmers and craftsmen from Europe, especially from Brandenburg, in the 19th century not only promoted industry and agriculture in Poland, but also Protestantism.

With the establishment of the Second Polish Republic in 1919, the Evangelical-Augsburg Church was formed in Poland . Juliusz Bursche remained general superintendent. In 1920 the Evangelical Theological Faculty of the University of Warsaw was founded.

The old Prussian parishes in the Pomeranian Voivodeship joined this Uniate Evangelical Church in 1923 with 290,470 members (as of 1936) and based in Posen. Immigrant Polish-speaking Lutherans from parts of Poland that previously belonged to Russia and Austria founded individual Lutheran parishes in Bromberg , Dirschau , Gdynia , Graudenz , Posen and Thorn , which belonged to the Evangelical-Augsburg Church in Poland and were friends with the old Lutherans who gave them hospitality granted in their churches.

The 17 evangelical parishes of the ecclesiastical province of Silesia in East Upper Silesia , ceded in 1922 , formed the Uniate Evangelical Church in Polish Upper Silesia (Kościół Ewangelicko-Unijny na Polskim Górnym Śląsku) with around 30,000 members and its headquarters in Katowice . Previously to the Evangelical Church A. u. H. B. in Austria belonging parishes in Poland formed the Evangelical Church A. u. H. B. in Lesser Poland (Kościoł Ewangelicki Augsburskiego i Helweckiego Wyznania w Małopolsce) with three Lutheran regionally responsible and one Reformed seniorate and under a superintendent, most recently Theodor Zöckler , with a total of 33,000 members. In 1923, the mostly Polish-speaking Lutherans of the Kraków area and the Polish part of the Teschener Land converted to the Evangelical Augsburg Church in Poland.

In the 1920s, the Evangelical Augsburg Church in Poland had about 400,000 members, about 1.3 percent of the Polish population at the time.

In 1937 there were seven dioceses headed by the senior as spiritual leader:

In 1938 there were already 10 dioceses: Warsaw, Plock, Kalisch, Piotrkau, Lublin, Lodz, Wolyhnia, Vilnius, Silesia and Greater Poland. In 1939 the Evangelical-Augsburg Church in Poland was divided into 118 parishes with 40 affiliated churches in what was then the national territory. There were 179 pastors in office, and as religion teachers a. a. 41 clergy were also active.

At the end of 1939, the Evangelical Augsburg Church in Poland was dissolved. About 30 percent of the evangelical clergy were killed in the concentration camps and prisons, including the long-time regional bishop Juliusz Bursche .

In the Reichsgau Wartheland , from 1941, churches were only allowed to exist as associations in the sense of legal entities under private law. It originated

Poles were not allowed to be members of a church in the Wartheland.

In 1945 the situation of the Evangelical-Augsburg Church changed. About 75 percent of Lutheran Christians left the country with the Germans; In the new areas of Silesia , Pomerania , East Prussia and East Brandenburg , the Protestant church buildings were mostly handed over to the Catholic Church.

Until the 1970s, the confession of Protestant denominations resulted in considerable social discrimination. Last but not least, this was one of the reasons for the ongoing resettlement, which meant a further reduction in the number of parishioners.

Evangelical Augsburg Church in Poland since 1990

The relationship between the state and the Evangelical Augsburg Church in Poland is regulated by a law that was passed by the Polish Parliament on May 13, 1994.