Main entrance to the university on the Kraków suburb 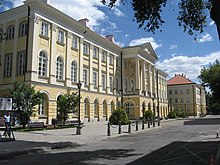 The University's Kazimierz Palace is part of the Warsaw Royal Route .

The University of Warsaw ( Polish Uniwersytet Warszawski , Latin Universitas Varsoviensis ) is a state university in the Polish capital Warsaw and with almost 50,000 students the largest university in Poland .

On November 19, 1816, on the initiative of Stanisław Kostka Potocki and Stanisław Staszic , the Russian Tsar and Polish King Alexander Romanov founded the University as the Royal Warsaw University with faculties of law and administration, medicine, philosophy, theology and music (the latter was the place of study from 1826 to 1829 for Fryderyk Chopin ). This was preceded by the merging of the Warsaw School of Law with the Warsaw School of Medicine. The university buildings were erected on the site of the former Knight's Academy and the Palace Square of the Kazimierz Palace.

In 1831 the university was closed after the failure of the November uprising, and in 1857 it was partially reopened under the name of the Medical and Surgical Academy . In 1862 new faculties for law and administration, philosophy and history, and mathematics and physics were opened. After the expansion of those faculties, the academy was named Szkoła Główna ( German secondary school ), Józef Mianowski became the rector of the university . In 1863 the college was closed again after the January uprising failed. The university was reopened in 1870 as the Imperial University of Warsaw with Russian as the language of instruction.

In 1915, during the First World War, it was re-established under German military administration and under the direction of Governor Hans von Beseler as the University of Warsaw with Polish as the language of instruction. From 1935 to 1939 the university was named Józef Piłsudski University Warsaw (Polish Uniwersytet Józefa Piłsudskiego w Warszawie ) in memory of the Polish Marshal Józef Piłsudski . From 1939 to 1944, during the German occupation of Poland in World War II , the university now operating in the Polish underground state was called Geheime Universität Warsaw (Polish : Tajny Uniwersytet Warszawski ).

The University of Warsaw is a classic campus university and extends over several city blocks along the Warsaw Royal Route . The main building is the baroque Kazimierz Palace , in which the rectorate of the university is located. There are several classical monuments on the entire university site.

The building of the Institute for Polonistics south of the Kazimierz Palace was built in the classicist style in 1820, rebuilt in 1862 by Antoni Sulimowski in the neo-Renaissance style and rebuilt after the destruction of the Second World War in 1952. Here there were auditoriums , chemical laboratories and Mineralogy Cabinet . There has also been a university canteen since the 21st century. The information center is a mirror image of the Polonistik building and was rebuilt by Sulimowski in 1860. There are laboratories and two high schools in it.

The building of the Historical Institute and its mirror image were built between 1818 and 1820 according to plans by Michał Kado in the strict classicism style . Inside there is a columned hall with plaster copies of well-known sculptures. For a long time this building housed the university museum and the painting and sculpture institute. The central school building was built in 1840 and 1841 by Antonio Corazzi for the secondary school and later used as the seat of the vice-rector. Rebuilt in 1860, it housed auditoriums, the academic boardroom, offices and the professors' library.

The Auditorium maximum is based on designs by Franciszek Eychorn and is designed in the neoclassic style. After its destruction in World War II, it was rebuilt in the original style from 1951 to 1955 by Wojciech Onitzch , Marian Sulikowski and Andrzej Uniejewski .

The St. Roch Hospital was built in 1707 by the priest of the Holy Cross Church Bartłomiej Terle for the Brotherhood of St. Roch at the Holy Cross Church. In 1749 the hospital was enlarged by Jakub Fontana , who rebuilt the inner courtyard and built the chapel. The complex was later rebuilt in the neo-renaissance style. Destroyed by the German Wehrmacht in World War II, it was reconstructed from 1947 to 1949.

The building of the old university library was built at the end of the 19th century by Antoni Jabłoński-Jasieńczyk and Stefan Szyller on the palace square of the Kazimierz Palace in neo-Renaissance style. Hipolit Marczewski created the group of sculptures on the building. In 1894 the library, which had been in the Kazimierz Palace since 1817, moved here. As early as 1831 after the November uprising , the library was looted by Russian soldiers and around 90,000 works were brought to Saint Petersburg . When Warsaw was evacuated by the Russian army in 1915, they took away a large part of the inventory, the archive and the books.

In 1939 the German Wehrmacht looted the drawing cabinet and burned around 4,000 manuscripts from eight centuries in 1944. During the German occupation, the library took part in the illegal "flying" underground university operations.

In 1999 the library moved to the modern building of the New University Library in the Powiśle district , which again has more than four million volumes. The old university building was restored by 2006. On the roof of the new building there is a park-like facility with gardens and groups of trees as well as a panoramic view of downtown Warsaw.

In the 21st century, the university comprises the following 19 faculties :

The Heavy Ion Laboratory of the University of Warsaw (ŚLCJ) operates the only K = 160 heavy ion cyclotron in Poland.

The facilities include the Foreign Language Center for Teachers and European Studies with departments for English, French and German, the Institute for American Studies and two interdisciplinary centers for behavioral genetics and mathematics and computer simulation .