Józef Klemens Piłsudski [ 'juzεf piw'sutski ] ( listen ? / I ) (* December 5, 1867 in Zułowo near Wilna , then Wilna Governorate , Russian Empire , today Zalavas , Švenčionys district , Lithuania ; † May 12, 1935 in Warsaw ) was a Polish military man , politician and statesman . He fought against Russian rule in Poland and was later Marshal of the Second Polish Republic . From 1926 until his death in 1935 he ruled de facto dictatorially .

Piłsudski was one of twelve children of a Polish nobleman and was baptized in Podbrodzie .

During his medical studies in Kharkov he became a member of the radical socialist organization " Narodnaya Volya " ("Will of the People") and expelled from the university in 1885 for political reasons because he had participated in student protests. After failing to enroll at Dorpat University, he returned to Vilnius .

In December 1886 he traveled to his brother Bronisław in St. Petersburg and participated in the preparation of an explosives attack on Tsar Alexander III. (1845-1894). The conspirators were arrested on March 13, 1887 and imprisoned in the Peter and Paul Fortress in St. Petersburg. In addition to the Piłsudskis, Lenin's brother Alexander Ulyanov also belonged to the group. Józef Piłsudski was sentenced to five years in exile and deported to Kirensk in Siberia .

In 1892 he participated in the formation of the Polska Partia Socjalistyczna (PPS) and from 1893 was a leading member of the party within the Russian Empire. From 1894 he took over the editing of the PPS party sheet Robotnik ( The Worker ). He was arrested in Łódź in 1900 and imprisoned in Pavilion X of the Warsaw Citadel . He later fled from St. Petersburg to Krakow . He then traveled to Japan in 1904 to receive help for a Polish uprising.

The supporters of Piłsudski were only able to organize themselves unhindered in the Austrian- ruled Galicia and parts of Silesia . Accordingly, Piłsudski set up shooting associations from the beginning of 1908. 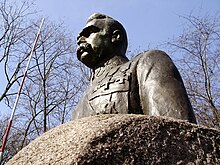 Monument to Józef Piłsudski in Turek , designed by Józef Gosławski

The First World War tried Piłsudski to use for the statehood of Poland. On August 6, 1914, militants led by him crossed the Galician border into Russian Poland and occupied the city of Kielce . On August 27th, Piłsudski led his fighters as the Polish Legion into the Austro-Hungarian Army . From December 1915 he headed the public Central National Committee and the covert, illegal military organization Polska Organizacja Wojskowa (POW). In the course of his cooperation with the Central Powers, Piłsudski found that they did not credibly support his goals of an independent Polish state. As a result, he resigned in July 1917 from the "Provisional Council of State in the Kingdom of Poland" ( Tymczasowa Rada Stanu w Królestwie Polskim ; Piłsudski was in this representative for military matters) and, together with his soldiers, refused to take the oath on the German Emperor Wilhelm II . , which triggered the oath crisis. The following imprisonment in Magdeburg strengthened Piłsudski's reputation as a national leader within the Polish population.

From Magdeburg he appointed Edward Rydz-Śmigły as chief commander of the POW in early 1918. In the turmoil of the November Revolution it was decided to take him to Berlin, accompanied by Count Harry Kessler, and from there by train to Warsaw, where he was enthusiastically received by the population.

Head of State of Independent Poland 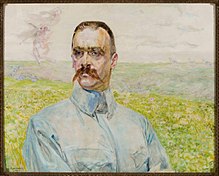 At the end of the war, on November 11, 1918, Piłsudski was given supreme command of the Polish troops by the Regency Council and shortly afterwards the leadership of the Polish state. This was confirmed on February 20, 1919 by the Constituent Sejm . He pursued the goal of restoring the borders from the time before the partitions of Poland , also far beyond the borders of the Polish settlement area. This policy initially led to the integration of Wielkopolska as defined by the Treaty of Versailles as well as to war with Soviet Russia and war with Lithuania because of the area around Wilna / Vilnius ( Central Lithuania ) claimed by both sides .

After initial successes in the alliance with the Ukrainian President Symon Petljura , the Polish army under Piłsudski suffered heavy losses. The decision was made in the “ Miracle on the Vistula ”, in which Piłsudski succeeded in August 1920 in almost completely destroying the Red Army , which had penetrated to the gates of Warsaw, by means of a risky pincer maneuver. On March 18, 1921, Poland and Soviet Russia signed the Riga Peace Treaty , in which they set the border in such a way that even areas that were not predominantly inhabited by Poles became part of the Polish state. Nevertheless, a large number of Poles remained outside the new state.

Piłsudski's policy also prevailed against Lithuania. Although Poland had renounced most of the disputed area of ​​Vilnius (Vilnius) with its Polish majority in the Treaty of Suwałki (October 7, 1920), Polish troops under General Lucjan Żeligowski conquered the city just two days later . After the city council had approved the annexation to Poland on February 20, 1922, it was finally carried out on April 20, 1922. From then on Poland and Lithuania were in a latent state of war.

After the March Constitution came into force , Piłsudski had to vacate his post of state with the election and swearing-in of the first President Gabriel Narutowicz in December 1922 and only retained military functions. In 1923, Prime Minister Wincenty Witos formed a new government. Marshal Piłsudski, whose power as chairman of the Narrow War Council ( Ścisła Rada Wojenna ) was curtailed, resigned as chief of staff and retired to his country house in Sulejówek near Warsaw. In interviews, speeches and writings he continued his attacks on the national democratic government of Poland. 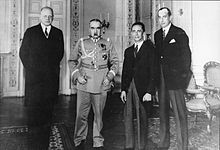 Funeral procession with Piłsudski's coffin in Kraków in 1935

The next few years were marked by growing corruption, office disputes among the frequently changing, unstable governments and economic crises. After President Stanisław Wojciechowski refused to form a government with Aleksander Skrzyński as Prime Minister, Piłsudski's supporters in the military decided to launch a coup . In May 1926, at the head of regiments devoted to him, he forced the President and the Witos cabinet to resign. Piłsudski was again elected head of state by the National Assembly , but renounced the further presidency and left the office to his loyal candidate Ignacy Mościcki . As a result, Piłsudski ruled the country in changing functions, including as Minister of Defense.

Strong man of the Second Republic

Monument in front of the Belvedere in Warsaw

In his late life he tried to secure the Polish state borders and stabilize the country internally (“ Sanacja ”, meaning “recovery” of the state). The political opposition could take part in elections, but was fought with partly police-state means (imprisonment of members of the Peasant Party and of National Democrats as well as Wincenty Witos ). Resistance by the Ukrainian and Belarusian minorities in the east was suppressed using police methods. Anti-Semitism , however, played no role in Piłsudski's politics.

In terms of foreign policy, he advocated an understanding with Germany, the greatest possible political independence and against any cooperation with the Soviet Union. Piłsudski adhered to the concept of an Eastern Federation, which should include the Baltic States, Ukraine and the Caucasus. To this end, the Soviet Union should be pushed back. Nevertheless, a Polish-Soviet non-aggression pact was signed in 1932 . France is said to have twice, in March / April and in autumn 1933, rejected a preventive war proposed by Piłsudski against the Nazi regime that was just establishing itself in Germany. A German-Polish non-aggression pact followed on January 26, 1934 in order to secure Poland from both sides. At the same time, relations with France and the United Kingdom were further deepened.

Piłsudski's private life was characterized by material modesty. His first marriage was to Maria Juszkiewicz (1865–1921). Since she was divorced, he joined the Evangelical Lutheran Church before the marriage in Paproć Duża near Łomża . During the First World War he returned to the Roman Catholic Church . With his later companion Aleksandra Szczerbiński (1882–1963) he had two daughters, Wanda (1918–2001) and Jadwiga (1920–2014). He married Aleksandra only after the death of the first wife.

Piłsudski died of liver cancer on May 12, 1935 in the Belvedere in Warsaw . His body was buried in the crypt of the Wawel Cathedral in Krakow . Piłsudski had decreed in his will that his heart would find its final resting place in the Rasos cemetery in Vilnius, his birthplace. The heart burial took place a year after Piłsudski's death: “Generals of the Polish army carried the urn with their hearts in a simple sedan chair.” At the same time, his mother was buried.

The Polish shipping company Gdynia America Line named their ocean liner Piłsudski, which they commissioned in 1935, after him. In 2002 the equestrian statue of Josef Pilsudski was created in Lublin. In the Wieliczka Salt Mine there is a Pilsudskid monument made of rock salt.