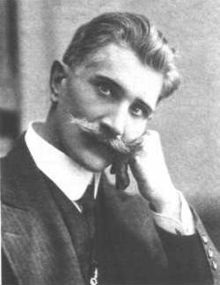 After attending school, he began studying philosophy at the Jagiellonian University in 1888 . Because of his early political activities as a student, which was shaped by socialism , he had to break off his studies and went into exile in Argentina for some time . In April 1890 he returned to Europe , where he first settled in Davos and later in Paris .

In the following years, however, he continued his studies at the University of Zurich , where he came into contact with Julian Balthasar Marchlewski , Rosa Luxemburg and the later President Gabriel Narutowicz . In October 1892 he was one of the co-founders and organizers of the Polish Social Democratic Party of Galicia and Teschner Silesia ( Polska Partia Socjalno-Demokratyczna Galicji i Śląska Cieszyńskiego ), which later joined the Polish Socialist Party ( Polska Partia Socjalistyczna ). Shortly afterwards he became editor of the socialist daily Vorwärts ( Naprzód ), in which he wrote critical articles about the bourgeoisie , and took part in an international congress in London in 1896.

Member of the Austrian Reichsrat and provisional Prime Minister

Call for the election of Daszynski in 1897

In 1897 he was elected a member of the Reichsrat , the parliament of the Austrian half of the Empire ( Cisleithanien ) of Austria-Hungary , to which he belonged as a representative of Galicia until 1918. From 1903 Daszyński was also a participant in several congresses of the Socialist International , at which he always advocated independence and unity of all Polish territories as a central component of the Polish socialist program. In order to achieve these goals, from 1912 there was intensive collaboration with Józef Piłsudski, whom he valued . In the same year he also became editor-in-chief of the Naprzód newspaper. During the First World War he was one of the co-founders of the Polish National Committee and at the end of October 1918 became one of the chairmen of the Liquidation Commission , a transitional government with a view to the newly established Polish state.

On November 7, 1918 he became chairman (Prime Minister) of a Provisional Government formed in Lublin after the restoration of the state of Poland . In this respect, he was in office at this time alongside the Prime Minister of the Regency Kingdom of Poland , Władysław Wróblewski . During this time he was also foreign minister . Like Wróblewski, he recognized the government formed by Prime Minister Jędrzej Moraczewski after the independence of the Second Republic on November 18, 1918 .

Second Polish Republic, President of Parliament and opponent of Piłsudski

After the election on November 5, 1922, he became Deputy Speaker of Parliament (Vice-President of the Parliament). He held this office until 1927. On December 9, 1922, he ran unsuccessfully in the presidential election . After the coup d'état of May 1926, in which Piłsudski took power and remained the real strong man until his death in 1935, relations between Daszyński and Piłsudski finally broke after initial support.

On March 27, 1928, however, he himself became Sejm Marshal ( Marszałek Sejmu ) and thus President of Parliament. In this capacity, he refused to open the Sejm when Piłsudski demanded access to parliament with an armed escort. In 1929 he was one of the co-founders of Centrolew , an alliance of left and center parties (PSL Wyzwolenie, PSL Piast, National Workers' Party, PPS, Small Farmers Party and Polish Christian Democratic Party), which fought against the non-party bloc of government supporters ( Bezpartyjny Blok Współpracy z Rządem (BBWR) ) Piłsudskis was formed.

Although he was re-elected as a Member of Parliament in 1930, he resigned from his mandate and as Sejm Marshal on December 9, 1930 after the defeat of Centrolew and the win of an absolute majority by the BBWR, when Marshal Piłsudski suppressed the attempt to form a Popular Front .

Monument to Ignacy Daszyński in the Rakowicki Cemetery in Krakow .

Daszyński, who was buried in the Rakowicki Cemetery in Kraków after his death , was also the author of several political books: