The title of this article is ambiguous. Further meanings are listed under Popular Front (disambiguation) .

Within political science , the term is defined more narrowly. Here, Popular Front refers in particular to the Popular Front alliances of the Communist Parties (CPs) organized in the Communist International (Comintern ) with other parties and organizations in Europe in the interwar period in the 1930s.

After the Russian Revolution , the Communist International (Comintern) was founded in Moscow in 1919 . The Comintern served the Communist Party of the Soviet Union (CPSU (B)) as an instrument of influence on the other Communist parties in Europe. The core of the Comintern ideology dominated by the CPSU (B) was the struggle against social democrats , socialists and left-wing bourgeois forces, even if they viewed themselves as part of the labor movement. Even during the phase of the rise of fascism in Europe, the Communist Party, ideologically and often financially dependent on Moscow, did not see the main opponent in the right-wing spectrum within the framework of the social fascism thesis . Instead, in the declarations of the Comintern, the Social Democrats in particular were named as the main enemy in the political struggle and were defamed and dismissed as “social fascists”.

Popular Fronts in the 1930s 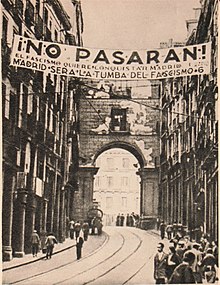 Advertising banners with the slogan No pasaran! the anti-fascist popular front in Spain 1936

After the seizure of power of the Nazis in Germany in 1933 also left Social Democrats and bourgeois forces were in the next Communists newly established concentration camps imprisoned by the Nazis. The previous policy of the CPSU (B) and the Comintern had failed.

From 1934 the political line of the communist parties organized in the Comintern began to change. An important role is ascribed to the French Parti communiste français , which in July 1934 under Maurice Thorez concluded an action pact with the socialists . On the one hand, this meant unity against fascism; on the other hand, the French CP largely abandoned its criticism of French colonial policy as part of a “patriotic” turnaround.

The final turn of the Comintern took place in 1935 at the VII World Congress . The congress distanced itself from the social fascism thesis . Socialists, social democrats and other left-wing forces have since been viewed as allies in a united front , and even a common unity party has been seen as a long-term goal. The first Popular Front was formed as the Front Populaire in France under Léon Blum in 1936/37. In Spain, after the coup of Francisco Franco within the Popular Front government during the Spanish Civil War from 1936 to 1939, communists joined a European coalition government for the first time ( Frente Popular ). Other communist parties in Europe and South America also adopted a popular front strategy. In 1938, for example, the Frente Popular was founded in Chile .

The Comintern's popular front policy came to an end in 1939. With the German-Soviet non-aggression pact , the Comintern changed its course.

The concept of the popular front after 1945

In post-war European history, so-called Popular Front alliances were created under Soviet influence, which also appeared as the Fatherland Front or the National Front, as in the GDR . Here, however, the communist parties were the undisputed leading power.

In Chile from 1970 to 1973 under Salvador Allende, after free elections, there was a Popular Front government, which, however , could not prevent the violent takeover of the regime of Augusto Pinochet .

The ideological development of the Western European CPs - especially in France, Spain and Italy - in the direction of so-called Eurocommunism is also closely related to the concept of the popular front . In Italy in particular, the social change of the first post-war decades and the associated electoral successes of the Communist Party of Italy (KPI) at the end of the 1960s stimulated right-wing extremist terrorism, which provoked corresponding reactions from left-wing extremist groups.

In order to guarantee the sovereignty of the democratic institutions on a broad basis during these "leaden years" ( anni di piombo ), the ruling Christian Democrats ( Democrazia Cristiana ) pushed for cooperation with the communists with a view to future government cooperation (see historical compromise ). As in Chile, the first attempts at a grand coalition with the involvement of the communists ultimately failed in 1978 when the Christian Democratic top politician Aldo Moro was kidnapped and murdered by the left-wing extremist Brigate Rosse .

The popular front also referred to, in a completely different context, the non- or anti-communist movements in some Soviet republics at the end of the 1980s, striving for independence from the USSR and democracy .

The term Popular Front is also the name given to various liberation movements in the Third World, for example the Popular Front for the Liberation of Palestine (PFLP).

The left electoral coalitions in Italy since the 1990s ( L'Ulivo 1996 and 2001, on a larger scale L'Unione and since 2007 Partito Democratico ) are more recent organizational (albeit extremely amorphous and heterogeneous) associations of social democrats, (post) communists and bourgeois forces .

In Latin America , in 1971 in Uruguay , an alliance of bourgeois, socialist and communist parties was established under the name Frente Amplio (Broad Front), which took over government responsibility for the first time in 2004.

Followed up on the idea of the Popular Front also originally as a front organization of the KPD / ML for the federal election in 1980 , founded the Popular Front against reaction, fascism and war in which around the slogan "Stop ostrich!" Centered election campaign formally nonpartisan after the a, to the topics range anti-fascism walked devoting organization.

This term from the 1930s is used again and again in domestic political debates in the Federal Republic of Germany, but mostly by the conservative camp to the address of the left , but most recently also by Chancellor Gerhard Schröder because of the participation of CDU politician Georg Milbradt in the demonstrations of the trade unions and the Linkspartei.PDS against Hartz IV .

The Germany Pact , an electoral alliance of the NPD and the DVU concluded in 2005 , was sometimes referred to as the “right-wing popular front”.