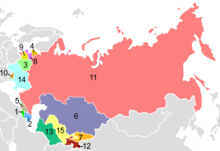 A union republic is a republic that belongs to a union ( confederation or federal state ). The word was mostly used for the last fifteen republics of the Soviet Union .

The Union Republics of the Soviet Union 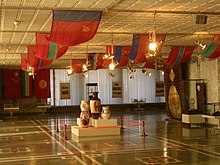 Lenin Museum Bishkek with the flags of the Union Republics

The originally four, now sixteen and finally fifteen Soviet republics (from Russian совет "council") had - unlike the US states , which the communist rulers liked to emphasize - de jure the right to leave the union. In chap. 8 / Art. 72 of the Soviet constitution of 1977 said:

"Every Union republic retains the right to withdraw freely from the USSR ."

However, the constitutional context made it clear that a unilateral “free” declaration of intent to leave was not possible. This was only possible in agreement with the Union or the Union Republics, but ultimately dependent on the policy of the leadership in Moscow . In the course of Gorbachev's reforms of “ perestroika ” and “ glasnost ”, the procedure envisaged for an exit was finally defined by a Union law in 1990, which none of the Union republics that declared themselves independent in 1991 adhered to. The Soviet Union collapsed .

Each Union republic had its own constitution and its own capital. Moscow had a special supraregional capital status within the entire Soviet Union and only in second place as the capital of the Russian Socialist Federative Soviet Republic (RSFSR). The central government institutions of the Soviet Union, with their headquarters in Moscow, had actually ( de facto ) taken over all important powers; their political decisions had to be accepted and carried out by the Soviet republics.

*) The Russian Federation has been the bearer of the rights and obligations of the former RSFSR and successor to the Soviet Union since 1991 .
1) With the constitution of the Ukrainian SSR of April 20, 1978, the Ukrainian language (de jure) became the official language of the USSR. Russian was given the status of a lingua franca .
2) The current state name is not always identical to that of the Union republic. After state independence , the Cyrillic alphabet was abolished and replaced by the Latin one in some of the former Union republics . In Moldovan , this change in the written language was implemented as early as 1989.

Other Union Republics until 1956

In the history of the Soviet Union there were at times other Union republics:

The republics founded by the Soviets were not union republics in the strict sense of the word: