The Chagata language or Chagata for short (own name چغتای Cha gh Atay orترکی Turkī ) was an East Turkish language that lives on today in the Central Asian languages Uzbek and Uighur . It was an important linguistic and literary language that was widespread from around the beginning of the 15th century to the beginning of the 20th century in Islamic Central Asia and also in other parts of Eurasia. In a narrower sense is under Tschagataisch the classic Tschagataisch understood that from the mid-15th century to about 1600 in the realm of Timurid was used and its successor states and served later generations as a model. 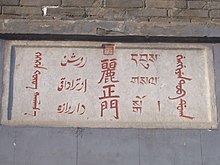 The Lizhengtor in the mountain resort of Chengde ; the second column is written in Chagatan

The word Tschagataisch goes back to the name of the second son of Genghis Khan , Tschagatai , who, after the conquest of Central Asia by the Mongols at the beginning of the 13th century, became ruler of the Mongolian empire between the Altai and the Aral Sea , the Tschagatai Khanate , in the area In the period that followed, the Chagataic written language developed.

In modern oriental studies , the term Chagataisch is often used in a broader sense, so that it can refer to any form of Turkish literary language that was used between the 13th century and the First World War in an Islamic cultural context in the Eurasian region outside the Ottoman Empire has been used.

In the 20th century, Chagatan or its local varieties were considered to be the older epoch of the respective modern written languages ​​in the individual sub-areas of its former distribution area and accordingly referred to as Old Uzbek , Old Uyghur , Old Turkmen or Old Tatar . In Soviet Turkology, the term Old Uzbek predominated . The language code of Chagatan according to ISO 639-2 and ISO 639-3 is chg .

The best-known Chagatan poet was Mir ʿAli Schir Nawāʾi (1441–1501), poet at the court of the Timurids in Herat , who wrote in both Chagatan and Persian. Timur's descendant Babur wrote his biography, Baburname , in this language.

At that time, the written Chagatan language was not only valid in the entire Turkic-speaking area of Central Asia , but also spread among the Muslim Turkic peoples in the Volga-Ural region, who are known today as the Volga-Ural Tatars and Bashkirs . Besides Ottoman, it was the second Turkic language of the Islamic cultural area that was used nationwide as a written language .

Over the following centuries, local varieties of the written Chagatai language developed under the influence of the local varieties of the Turkic languages. While the Tatars and later also the Kazakhs developed independent written languages ​​on a local basis from the 19th century , Chagata remained the common written language of the Turkic peoples of Central Asia until the early 1920s .

In the 1920s, separate written language norms for the Turkic language varieties of Central Asia were introduced in the young Soviet Union and at the same time the Latin script was introduced instead of the Arabic script , and at the end of the 1930s - parallel to the increased teaching of Russian - the Cyrillic script was introduced instead of the Latin script. This ended the history of the written Chagata language in its traditional form. The Turkish language varieties of the settled population in the central area of ​​Soviet Central Asia became the basis of the Uzbek standard language , the official language of the Uzbek SSR founded in 1924 , while the varieties of East Turkestan became the basis of the New Uighur standard language . This made modern Uzbek and Uighur the direct successor languages ​​of Chagatai.

Most of the Chagataic language was written using the Arabic alphabet . There are also copies of Chagatai literary works in Uighur script , which were used for administrative purposes in the Timurid Empire .
The Arabic alphabet for Chagataisch is the same as the Perso-Arabic alphabet. The orthography was not standardized; Whether to write out a vowel in full or to use Tashkil was left to the scribe; but mostly the vowels were written out. However, this only applies to Turkish words, because Persian and Arabic words were written as in their standard orthography.

The grammar of Chagatan was very diverse and influenced by many.

The Arabic influence was that Arabic loanwords could carry the Arabic plural, i.e. This means that the general Turkish plural -lar did not necessarily have to be used with these words. Especially in the written language it was of course considered eloquent to use the Arabic plural, e.g. B. the eloquent plural of ḫabar (news) would be aḫbâr , while Umgangabarlar would be used in colloquial language .

The Persian influence on this language was greater than the aforementioned Arabic. Similar to the Ottoman language and Crimean Turkish , the Persian Eżāfe construction was used in certain names or in literary expressions that were adopted from Persian literature, e.g. B. därd-i dil (heartache), which would have been dil därdi in a Turkish construction .
Another major influence was the Persian indefinite article, which was only applied to Persian words, e.g. B. bülbül- ê ( a nightingale).

The diversity of the Chagatai language consisted in the fact that it brought together different grammars of Turkic languages. This occurred particularly in case markers; For example, the ablative was -dan or -dın , as it is still common today in the Uighur languages . The genitive in Tschagatai was -niŋ or -iŋ , as is common in modern Oghusian languages, Turkish or Turkmen.

In general, it can be said that Chagatai was much more open than the rather rigid, standardized official form of today's Turkic languages. The Turquoise (like the Tschagataiische was of its speakers usually called) was a literary standard, which was subject to many influences and brought together these influences into a unique new form of language, what a Uygur proverb so expresses: " Arabic is knowledge / science, Persian is sugar, Hindi is salt, Türki is art ".