This article covers the city. For the province see Herat (province) .

Herat ( Persian هرات, DMG Herāt , in ancient times Haraiva [ta] ) is a city in western Afghanistan in the valley of the Hari Rud .

It is the capital of Herat Province and the second largest city in the country after Kabul . The majority of the 556,205 inhabitants are Tajiks (own name Farsi ).

Central Asia with the Silk Road

Temperatures fluctuate between 5 and 10 ° C in winter and around 30 ° C in summer. 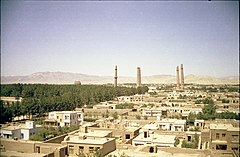 The Iranian tribe Aria , ancient Persian Haraiva [ta] , ancient Greek Artakoana , settled around 800 BC. In the oasis of Hera. Artakoana was the capital of the Aria region and the Persian satrapy of the same name . 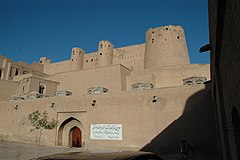 The citadel in Herat, built under Alexander

Alexander the Great conquered the city in 330 BC. And built it into a military base in Aria under the name of Alexandria . During this time, the city's famous citadel was built . The region around Herat was conquered by the native Parthians after the fall of the Seleucids - from here the founding of the mighty Parthian Empire began.

With the fall of the Persian Sassanids , Herat became part of the Muslim caliphate . The Samanids later elevated Herat to a residential city and developed it into a center of Persian art, culture and literature.

Around 1000 AD the Turkish Ghaznavids conquered the city and around 1040 the Seljuks . The local Ghurids ruled here from 1150 before the city fell to the Khorezm Shahs in 1215 .

In Firu-zkuh near Herat there are 20 tombstones of Persian Jews . The inscriptions prove the existence of a Jewish community with a cemetery for 1115–1215. 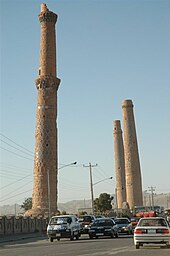 Ruins of the Musalla complex 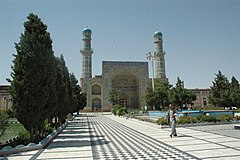 During this time Herat was an important center for the production of metal goods, especially bronze, which were often decorated with ornate inlays made of valuable metals. In 1220/1221 the Mongols came under Genghis Khan and destroyed Herat several times. In 1245 the city was given to the Kartids , a vassal dynasty of the Mongols, under which Herat was able to recover.

Timur Lang destroyed Herat around 1381. Under his son Shāh Ruch it was rebuilt and declared the capital of Khorasan and the Timurid Empire . Shah Ruch's wife Gauhar-Schad built a. the Musallā complex with its minarets, some of which are still standing today . 1452–75 Abu l-Qasim Babur took over the rule, followed in 1459 by Abu Sa'id and 1469–1506 by Husain Baiqara. Under Husain Baiqara, the city flourished again - he promoted agriculture and consolidated Timurid rule.

The Uzbeks conquered Herat in 1507; In 1510 the city was taken by Ismail Safawi . Herat became part of Persia again and remained one of the most important Safavid cities in Khorasan until the Afghan conquest . 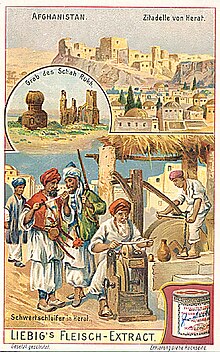 An advertising poster from 1910

The city belonged to the Sawafid Persia at the beginning of the 18th century, which however lost power. In 1717 the Abdali regional Pashtun group gained power. There were many battles for Herat between 1718 and 1880. In 1731 Nader Shah gained control of the city. In 1749 the Pashtun ("Afghan") Ahmad Shah Durrani conquered Herat from the Persians and united the cities of Kandahar and Kabul to form his new Afghan empire. Power struggles began around 1800 between the two ruling clans of the Durranis , which in 1819 actually resulted in an autonomous emirate under one dynasty line. In the course of the 19th century, claims by the Persians led to several battles for the city, which was occupied by Persians in 1852 and 1856 and largely destroyed.

In the first half of the 19th century The Great Game began , the political chess game of the two European colonial powers Russia and Great Britain around Central Asia. The conflict ended in 1887, and Afghanistan created a buffer zone between Russia and British India , which at the same time ensured the independence of Persia and Afghanistan.

In 1837 the Persian army besieged Mohammed Shah Herat. The British artillery officer Eldred Pottinger , who happened to be in Herat, offered his services to the Emir of Herat. He was given the defense and managed to hold the city. The Russian ambassador Count Simonitsch took command of the Persian army. British troops then landed in the Persian Gulf . As a result, the Persian troops withdrew and both Simonitsch and Witkewitsch were ordered back to Russia. This situation eventually led to the First Anglo-Afghan War .

In 1863 Herat was taken by Dost Mohammed , the founder of the Baraksai dynasty. In 1879 his grandson Mohammed Yakub Khan , an emir of Afghanistan from Herat, placed the country under British control. It was not until Abdur Rahman Khan , who ruled from 1880 to 1901, that there was a period of relative political stability and cultural revival. The distinct music scene in Herat at that time was Persian until the beginning of the 20th century, in contrast to the music of Kabul, which was influenced by India.

Even before the Soviet invasion of Afghanistan in late 1979, there was an extensive presence of Soviet advisors with their families in Herat. From March 10-20, 1979, the army mutinied in the city, led by Ismail Khan, and 350 Soviet citizens were killed. The Soviets bombed the city, causing extensive destruction and thousands of deaths, and retook the city with tanks and paratroopers.

Ismail Khan became the mujahideen commander and, after the withdrawal of the Soviets, governor of Herat. In 1995 the Taliban captured Herat. During this time the secret women's college " Golden Needle Sewing School " was established. On November 12, 2001, Herat fell to the Northern Alliance and Ismail Khan came back to power in the region.

In 2004, Hamid Karzai deposed Ismail Khan and appointed Said Mohammad Kheir-Khowa as the new governor. Shortly afterwards, the residents of Herat rebelled because they did not agree with Karzai's decision. 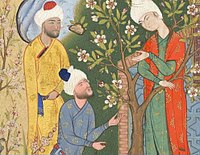 Herat was a center of the Persian-Muslim cultural world for a long time. The city is particularly known for its important art and literature tradition. One of the most famous poets of Persia, Jami , who is also considered to be the last important Sufi master of the Middle Ages, was from Herat. The Halveti and Cheschti Sufi orders were also founded in Herat. Another celebrity of the city was Ustad Kamal-ud Din Behzad , the most important exponent of Persian-Muslim miniature painting. Herat is also known for its hand-knotted Persian carpets. The Herat style (named after the city) is one of the most expensive and well-known of its kind.

Until the fall of the Safavid Empire , Herat, then also known as the Pearl of Persia , was the second largest city in the kingdom and the most important metropolis in eastern Persia.

Herat is an old city with many historical buildings, although these have suffered from the military conflicts of the last decades. Most of the buildings are made of adobe bricks . The recently rebuilt Citadel of Herat , built under Alexander the Great , dominates the view of the city. In the 15th to 17th centuries, Herat was also known as the Florence of Asia.

In Herat, the university is currently being built in the northern part of the city. Despite the construction work, teaching takes place in the buildings that have already been built. There are currently 10 faculties:

The city is conveniently located on the trade routes between Iran , India , the People's Republic of China and Europe . The roads to Turkmenistan and Iran are still of strategic importance.

The airport Herat located 10 km south-east on the road to Farah. Airlines such as Ariana Afghan Airlines and Kam Air fly to it.

A railway line from the Iranian city of Khaf is under construction.