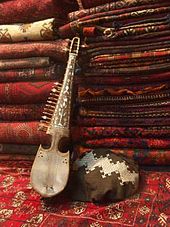 Rubab ( Persian رباب rubāb ; also Kabuli rubāb ) is a plucked bowl-neck lute , which is mainly played by Pashtuns and is considered the national instrument of Afghanistan . As is typical for string instruments of the Eastern Iranian culture ( Khorasan ), it has a two-part resonance body covered with skin. The rubāb was probablyintroducedinto Afghan music in the 18th century. It should not be confused with the oriental barbed fiddles rabāb , rawap , rebab or similar.

From the Maghreb ( ribab ) to the Middle East and furthermore in Indonesia ( rebab ), the word rabāb denotes bowed spiked fiddles, but in South Asia plucked lute instruments. The rabāb types depicted in the miniature paintings of the Mughal period (from the 16th century) are not related to the Afghan rubāb . The dhrupad rabāb played in classical music in northern India was replaced by the sursingar in the 19th century .

The Afghan rubāb is not shown in Persian miniatures , it was developed in the 18th century in the large cities of Kabul , Kandahar or Peshawar and belongs to the rebab family with a double-bulged sound body, which also includes the Indian rubab, the Persian long-necked lute tār , das Tibetan dranyen and the rawap from Kashgar belong. It was probably described in its Afghan form in 1815, and Ghazni was repeatedly given as the place of origin . The rubāb spread in different variations in the 19th century as far as Balochistan , the east of Tajikistan ( Pamir , robab, Pamiri rubāb ), Pakistan and north-west India .

In Lucknow , the form was further developed into the Indian sarod in the 1860s . Families descended from Afghan Rubāb players were largely responsible for the spread of the sarod in northern India. The Rubāb player Gulam Bandegi Khan Bangash is credited with developing the sarod in the 19th century . Hafiz Ali Khan (1888–1972), who went to Kolkata in 1918 and became famous there as a sarod player, came from his school . Another plucked instrument, called the sursringar , emerged in northern India in the 19th century as a short-lived hybrid of the rubāb and the rudra vina . The rubāb , used in the classic dhrupad style, was supposed to have a finer sound, so the gut strings were replaced by metal strings, the body became larger and rounder and, instead of the skin covering, was given a glued-on wooden top. The sweet tone was now well suited for the Alap (free rhythmic solo development of the raga ). Nevertheless, the sursringar disappeared in the middle of the 20th century.

Before 1860, court music in Kabul was of Persian origin , under Shir Ali Khan (ruled 1863–1866 and 1868–1879) musicians from northern India ( Ustads ) came to Kabul and brought the northern Indian singing techniques of Dhrupad and Khyal with them. A new genre of Afghan instrumental music emerged from the Pashtun style of playing the rubāb and the Indian musical tradition. At the rulers of Abdur Rahman Khan (ruled 1880-1901) until the deposition of Amanullah Khan in 1929, the rubāb was particularly valued. In Herat concerts of Persian were from the late 19th century with several singers, TAR (in Herat chahartar and the Persian) santur usual. The urban, Indian-influenced music of Kabul with the participation of the rubāb also prevailed over the Persian music style in Herat in the 1920s. In the 1930s, the Indian tonal system of raga was introduced. Alongside the rubāb, the Indian harmonium became the leading urban instrument .

The Badachschani rubāb , corresponding to the Pashtun Kabuli rubāb , bears its name affix because it is played in the northern Afghan province of Badachschan , which is mainly inhabited by Tajiks .

In the Tajik music of the northern neighboring country, the Pamiri rubāb , named after the Pamir mountain region, is used in the Berg-Badachschan region . Their different shapes are more reminiscent of a guitar. They are fretless and have six, seven, or less often nine gut or nylon strings that run over a round and flat body covered with skin.

Design and style of play

The lute instrument is made from the wood of the mulberry tree . The lower part of the boat-shaped body, which is strikingly tapered on the sides, is covered with goatskin. It tapers to a short neck with the pegbox turned down. Depending on the region, the instrument is decorated with different painted patterns and with ivory inlays .

The rubāb has three melody strings made of gut or nylon, two or three long drone strings and usually 15 sympathetic strings that are tuned in the tone scale played. The mood ( sor, from Hindi svar, Persian sorudan ) varies from region to region. In Kabul the three melody strings are tuned in fourths , the usual key D is taken from the Indian harmonium. The root note is after the Indian Tonsilbensystem Sargam with Sa referred. There is also the alternative tuning in a fourth and a fifth. The division of the octave into twelve approximately equal semitones is given by the frets of the rubāb . The pegs of the melody strings are on the right side of the peg box, the pegs of the drone strings are opposite, on the same side the pegs of the short sympathetic strings are attached in the middle. Rubāb are played with a small wooden plectrum .

The best known are Rubab from the Old Town Kabul Charabat from Herat and Balkh . There are workshops where rubāb are made. With the beginning of the Taliban rule in 1995, many workshops were relocated to Peshawar .

In the far northeast of Afghanistan, in Badakhshan , and in the same eastern province of Tajikistan occasionally play Tajiks in the heights of the Pamir Mountains, the fretless Pamir Rubab , even Rubab-i Pamiri . The instrument has an oval body, which is covered with a thick leather skin attached to the sides with nails. The six gut strings are plucked with a thick wooden pick ( zakhma ). Other stringed instruments in Badachschan are the long-necked lute sitār with three melody strings made of wire, some sympathetic strings and frets, the fretless seven-string long-necked lute tanbūr , the eight- stringed tār and the komuz . The ghichak is the only string instrument in Badachschan.

Characteristic of the Rubāb-playing are fast repeated plucking of the strings with sudden interruptions, in contrast to the soft and continuous play of the long-necked lute dambura from northern Afghanistan or the 14-string dutār from Herat. On the rubāb you can grasp an octave with your fingers with the left hand unchanged, which roughly corresponds to playing the violin in the first position, with the dutar the hand has to be moved over the fingerboard. This means that the dutar has to be played more slowly. With the rubāb it is easier to hit the right notes by marking the frets. With the right hand are in the Punteado the strings -Spielweise individually with the plectrum plucked, wherein the tee ( "down stroke") out more and the sound is amplified by the additional coating of the hand over the skin covering the resonance body percussive. The upstroke is significantly weaker and takes place without hand contact with the instrument body; this results in a different sound in each case.

Forms of music and musicians

Kabuli rubāb and Indian harmonium at a festival in Farah , western Afghanistan, May 2010

In addition to the courtly music with singers, rubāb , harmonium and tabla , there were also professional bands of women who mostly played at weddings. In the 19th century, only the frame drum dāireh and, from the 1930s, the tabla and harmonium were used as vocal accompaniment . The rubāb was not played by women anywhere in the north of Afghanistan ; women playing rubāb were very unusual in the south. The exception was a Rubāb player in Herat, who formed a band with his own wives in the 1930s. In rural amateur music, the rubāb is played in orchestras together with harmonium, zerbaghali (single-headed goblet drum, usually made of clay), the long-necked lute tanbur, the Persian tār and various flutes. The rubāb is an accompanying instrument for chanting ghazeles , the basic form of Persian poetry. Fast instrumental parts are inserted between the text recitation. Another classical form of music is Naghmeh-ye Kashāl, a longer instrumental piece that consists of parts of free rhythmic development of the melody and a main composition played several times with rhythmic variations. It was considered a specialty for solo rubāb. Accompanying instruments are the tabla , more rarely the doholak (barrel drum with two sides). Naghmeh-ye Klasik is the instrumental counterpart to the classical khyal chant, which is usually played on the rubāb with tabla accompaniment. It corresponds to the parts of Alap and Gat of the north Indian raga.

In Kabul, many professional urban musicians ( Sāzandeh ) were followers of the Sufi order of the Chishtiyya , which was known for the extensive use of music in its rituals. There were some religious monasteries ( Khanaqāh ) in Kabul, in which religious ghazals ( Na't ) were sung in long evenings with harmonium, rubāb, tabla, tanbur and unusual stone and metal rattles ( qairaq or chimta ). Sufi practices and music making in general have been attacked by Orthodox mullahs . There were no khanaqāhs in Herat, some chishtiyya musicians played visiting holy tombs outside the city.

From 1940 the radio transmissions of Radio Afghanistan were responsible for the spread of a new popular music style from India and Pakistan. Popular music and, in a special sense, the music produced especially for the radio was called Kiliwali , the repertoire from Indian films also called Filmi. The line-up was usually a rubāb , a sarinda (canceled member of the Rubab family) and a doholak in addition to the singer .

The great master of the rubāb in the north Indian musical tradition was Ustad Muhammad Omar († 1980) from the Kabul musician district of Charabat, a contemporary of the singer Ustad Sarahang . He did not descend from Indian court musicians, but learned as an amateur musician with Ustad Qasem (1878–1957). In the early 1950s he became the leading rubāb player on Radio Kabul, and one of the most valued musicians in the country through the esteem the rubāb enjoyed as a national musical instrument. He composed the accompanying music for regional singers and also pieces for rubāb solo and with orchestra. He made some structural changes to the instrument. In 1978 Ustad Omar gave a concert with the young musicians of the German group Embryo , which was broadcast by Radio Television Afghanistan .

Aziz Herawi, born in 1946, comes from a conservative and wealthy family in Herat. He appeared regularly on the radio as a dutar and rubāb player. After Soviet troops marched into Afghanistan in 1979, Aziz fled first to the mountains, then to Peshawar in 1983 and later to California . He has published numerous CDs and is recognized as a Rubāb master. Younger well-known Rubāb players are Essa Kassemi, Homayun Sakhi, born in Kabul in 1976, and Mohammad Rahim Khushnawaz from Herat.

Among the Afghans who fled to Peshawar before the war in the 1980s was the professional musician Amir. In Herat he had been a singer and harmonium player, in Peshawar he was active as a rubab player in the band of the singer Shah Wali Khan (* 1957) from Jalalabad . A 1985 film by John Baily uses the example of this Rubāb player to describe the situation of Afghan musicians in exile in Pakistan. The English ethnomusicologist John Baily is himself a recognized dutar and rubāb player. He has played with the most important Afghan musicians in concerts and for CD recordings.