from Wikipedia, the free encyclopedia
p5

The origin of the name is unclear. “Pamir” is derived from a Turkish word meaning “cold steppe pasture”. In the 19th century the name was linked to Indian mythology and understood as an abbreviation of Sanskrit upa meru , "beyond the (holy) mountain Meru "; correspondingly shortened from Sanskrit upa mery , "the land behind the river bed". A folk etymological interpretation from Persian bam-i dunya , "roof of the world", was also adopted. Furthermore, “Pamir” was derived from the Persian pá-i mihr , with pá , “foot”, and mihr , “ Mithra ”, ie “at the feet of the (Persian sun god) Mithra”. In addition to these regional references, the name "Pamir" is said to have been introduced by Russians who fought against the Chinese in the area in the 17th century. Local scholars pointed out that before the Soviets and Russians the ethnonym "Pamir" was only associated with the northern Kyrgyz people from Murghob .

The extreme north of the Fold Mountains beyond the Transalai Mountains belongs to Kyrgyzstan ( Osh region ), the east beyond the Sarikol chain to China ( Xinjiang autonomous region ), the south to Afghanistan ( Badachschan Province ), the rest to Tajikistan . Within Tajikistan, the Pamirs mainly belong to the autonomous province of Berg-Badakhshan . In addition, the districts subordinate to the republic to the north of the Darwas chain have a share in the mountains, furthermore the province of Chatlon in the westernmost foothills .

The Pamir connects some of the great mountain ranges of Asia: to the Tianshan and the Alai mountains in the north it is delimited by the Alai valley with the rivers of Kysylsuu and Surchob , to the Kunlun Shan in the southeast by the river valleys of Taxkorgan and Yarkant . In the south and southwest, the Wachandarja and Pandsch courses form the boundary to the Hindu Kush and indirectly also to the Karakoram . In the east of the Pamir there is the Tarim Basin , which is bounded in the south by the Tibetan highlands .

The average height of the Pamirs is about bis 3600 4400  m , which mostly above the here at 3700  m lying tree line is located. The largest lake in the Pamirs is the Karakul in Tajikistan. The longest glacier is the 70 km long Fedchenko glacier . There are frequent earthquakes , one of which formed the Saressee in 1911 .

Orographically , the largest part of the Pamir belongs to the catchment area of ​​the Amu Darya and is thus drained to the Aral Sea. In fact, the courses of the Amu Darya headwaters include the Kysylsuu, Surchob, Wachsch and Pandsch the Pamir in the north, south and west. Correspondingly, other large rivers of the Pamir flow into it, including the Pamir of the same name , the Gunt and the Bartang into the Pandsch, the Obichingou into the Wachsch and the Muksu into the Surchob. In the east, the Pamir is drained to the Tarim basin, with the Gez as well as the Taxkorgan . In the northeast, in turn, which also forms Kysylsuu said source flow of Kaxgar , like his namesake Western also extends Alai valley and from this through the 3536  m is separated Taunmurun high-pass, a further enclosure of the mountain.

The climate is rough and dry. The residents are mostly cattle breeders and keep yaks and fat-tailed sheep . The mountains are accessed through the Pamir Highway .

The East Pamirs during the Ice Age 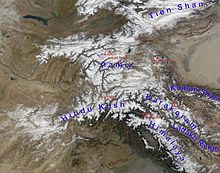 The Pamir and the adjacent mountains

The East Pamir has an east-west extension of around 200 km from the western edge of the Tarim Basin. The north-south extension is around 170 km from Kingata Tagh to the northwestern Kunlun foothills. In the center of the East Pamir are the massifs of the Muztagata ( 7620  m ) and the Kongur Tagh ( Qungur Shan , 7578, 7628 or 7649  m ).

Today's valley glaciers, which are up to 21 km long, are limited to the over 5600  m high mountain ranges. During the last Ice Age, the glacier ice covered the high plateau to the west of Muztagata and Kongur with its low mountain relief. From this glacier area there is an outlet glacier to the northeast through the Gez valley up to approx. 1850  m above sea level. M. and thus flowed down to the edge of the Tarim basin. This outlet glacier received an inflow from the Kaiayayilak glacier from the Kongur north flank. From the northern border Kara Bak Tor (massif Chakragil c. 6800 or 6694  m ) is the Oytag-valley glaciers in the same exposure also down to about 1,850  m above sea level. M. drained.

The equilibrium line (ELA) was lowered by 820 to 1250 meters in altitude compared to today. Under the condition of comparable precipitation conditions, this results in an ice age temperature drop of at least 5 to 7.5 ° C.

The fauna of the Pamir is naturally composed of high mountain species. The best known, but also the rarest animals of the mountain range include the snow leopard and the Marco Polo Argali . Both species are protected in the Chinese Taxkorgan Reserve , which is located in the border area to the Karakoram . 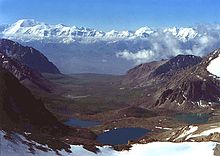 The most important mountain ranges of the Pamir are:

The Pamir Mountains include:

Map with all coordinates of the mountains section : OSM

Note : The peaks of the Kongur and Muztagata groups are counted as Kunlun in some sources , making Pik Ismoil Somoni the highest peak of the Pamir.