Bishkek [ biʃˈkʲek ] ( Kyrgyz / Russian Бишкек, formerly Frunze ) is the capital and at the same time the political, economic and cultural center of Kyrgyzstan . The city emerged from a caravan station on the Silk Road and has been renamed several times since it was founded. The Russian fortress Pischpek (Пишпек) was first named in 1878, from 1926 to 1991 the city was named after Mikhail Vasilyevich Frunze . In 2020 it had around 1,053,915 inhabitants.

Bishkek is located 800  m above sea level on the northern edge of the up to 4875  m high Kyrgyz Mountains , a western part of the Tian Shan Mountains , which give the city an imposing backdrop. To the northwest of the city, a wavy steppe landscape stretches into nearby Kazakhstan .

The Tschüi River flows through this area a little north of the city and is the namesake of the administrative district surrounding Bishkek. The Tschüi tributaries Ala-Artscha and Alamüdün , which come from impressive mountain valleys, flow through Bishkek itself in a south-north direction . The Great Tschüikanal (Большой Чуйский Канал) runs through the city in an east-west direction .

The Ala Artscha National Park is about 40 km (45 min. Journey) south of the city in the Kyrgyz mountains. It offers an impressive alpine mountain landscape and beautiful hiking trails.

The Panfilov Park is located in the city center. 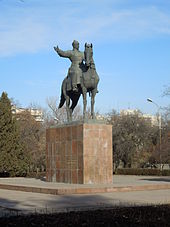 Frunze statue in front of the Bishkek train station

In Kyrgyz referred Bishkek or Pishpek a vessel for the preparation of koumiss , fermented mare's milk. There are numerous legends that try to establish a connection between the city and such a vessel. More scientific explanations mean that the name arose from a folk etymological interpretation of an old word for place below the mountains .

The city emerged from a caravan station on a route through the Tian-Shan Mountains that is part of the Silk Road . In 1825 the Uzbek Khan von Kokand had the clay fortress Pischpek built here, but it was captured and destroyed by Russian troops in 1862 during the Russian conquest of Central Asia . The garrison founded by the Russians at the same place grew rapidly due to the influx of Russian peasants, who were provided with fertile black earth here . In 1878 a town called Pischpek was founded.

In 1926 it became the capital of the newly formed Kyrgyz ASSR and at the same time renamed Frunze ( Russian Фрунзе) - after Mikhail Vasilyevich Frunze , a close confidante of Lenin, who was born in Bishkek and during the revolutions of 1905 and 1917 and in the Russian Civil War in the 1920s had played a crucial role.

During the dissolution of the Soviet Union , Kyrgyzstan declared its independence as the Kyrgyz Republic on August 31, 1991, and the city regained its Kyrgyz name in the form of Bishkek .

The Ala-Too Square in the center

Bishkek - View of the city center from the ferris wheel

Bishkek - view of the mountains

Bishkek developed into a modern city in Central Asia, with restaurants and cafes and heavy traffic with used cars from Western Europe and leftovers from Soviet production. As planned, laid out in a chessboard format, it is a city with wide boulevards, marble-clad public buildings and massive apartment blocks in typical Soviet design. Due to its short history, Bishkek has no historical structures. Almost all streets in the city center are flanked on both sides by irrigation channels, which irrigate the countless trees that provide shade in the hot summer and give the otherwise colorless cityscape a lively and cheerful character, at least in summer. Many new commercial buildings have been built recently.

The Bishkek train station, in front of which there is an imposing equestrian statue of Frunze , was built by German prisoners of war in 1946 and has survived practically unchanged to this day. Most of the prisoners died during the construction work from starvation, cold, overwork and illness and were buried near the construction site.

During the Soviet era there was a considerable concentration of large industrial plants in and around the city, most of which are now either closed or have limited production. Bishkek was also home to an important Soviet fighter pilot school; one of its graduates was the future Egyptian President Hosni Mubarak .

In 2002, the United States obtained the right to establish an air force base at nearby Manas International Airport on a sizable annual lease to support its operations in Afghanistan . Russia followed this example and in 2003 established its own air base on the military airfield in the city of Kant, about 40 km away . The American base was closed in June 2014. In 2010, Bishkek was the center of protests against then President Bakiyev , which ultimately led to the change of government in Kyrgyzstan . In the course of the political upheaval, the then mayor of the city, Nariman Tuleyev , was also deposed.

Bishkek is the country's cultural center and is home to numerous cultural institutions. The most famous are the Bishkek Opera and Ballet Theater and the Bishkek Russian Drama Theater .

Today there are more than a dozen universities in Bishkek, some of which arose from former Soviet state institutions, but some of which were founded with external support only since the country's independence. B. the Kyrgyz-Russian Slavic University Bishkek , the Kyrgyz-Turkish Manas University, the American University of Central Asia . The student body in Bishkek is very international, as the location is also very attractive for students from neighboring countries.

According to the 2009 census, 66 percent of city residents are ethnic Kyrgyz . 23 percent are Russians . Smaller groups of Uyghurs , Tatars , Koreans , Uzbeks , Kazakhs and Ukrainians also live in the city. In 2012 there were 2,554 ethnic Germans living in Bishkek, which corresponded to 0.3% of the city's population.

In the recent past, an increasing number of Chinese from the neighboring People's Republic of China have settled in Bishkek. Most of them are market traders and migrant workers.

Most of the Kyrgyz are Sunni Muslims .

The large Russian minority belongs to the Russian Orthodox Church .

Bishkek has one of the largest Evangelical Lutheran congregations in Kyrgyzstan. The house of prayer has the only bell that rings for an Evangelical Lutheran service in Kyrgyzstan. People meet here for church services on Saturday afternoons in the Kyrgyz language and on Sunday mornings in Russian. Until a few years ago, there were also services in German here. The house is also a meeting point for various community groups.

This prayer house was completely destroyed by fire on January 27, 2015. The inauguration of a new church took place on April 8, 2018. It was made by Bishop Alfred Eichholz in the presence of Archbishop Yuri Novgorodow .

Bishkek is the seat of the bishop of the Evangelical Lutheran Church in the Kyrgyz Republic (ELCKR).

Bishkek is the seat of the Roman Catholic Apostolic Administration of Kyrgyzstan .

The city is home to the football clubs Alga Bishkek and FK Dordoi Bishkek .

In addition, Bishkek has had friendly relations with the Chelyabinsk Oblast in Russia since 1996 .