In Mongolian cuisine , the drink is called Airag ( Mongolian айраг ). It is considered a national drink there . The kefir is similar . 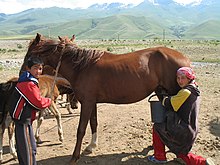 Kyrgyzstan: A mare is being milked.

Kumys or Airag is milk white and tastes sour, tingling, cool and refreshing, with an almond-like aftertaste. The journalist Gerd Ruge describes the taste as “yogurt with beer”. It is slightly alcoholic, the ethanol content is between 1.0 and 3.0%, with an average of 2.0%. Kumys is part of the everyday food of Asian steppe peoples .

It was also used as a nutrient for diseases such as B. tuberculosis and anemia . In the 19th century, it was common in Russia to take a cure in a Kumys sanatorium . Due to its high vitamin and mineral content, the kumys served the steppe peoples partly as a substitute for fresh fruit and vegetables. It can also have a slight laxative effect (if consumed regularly).

The distillation of Airag produces the brandy Archi . It can also be made from kefir.

Eduard Stahlberg, chief doctor of the Russian Kumys Sanatorium in Moscow in the 19th century, stated that the safest method was to inoculate mare's milk with old kumys and to maintain the correct temperature for the two-day fermentation . If you let the kumys continue to ferment, the remaining milk sugar is also converted and after eight to ten days you get a drink that tastes significantly more sour and contains more alcohol. Therefore, kumys is best enjoyed when it is still fermenting.

A leather pouch in which Airag is traditionally made.

Traditional production in Kyrgyzstan is based on mare's milk, which is stored for one to two days in a container that has been previously treated with smoke . Fresh milk is then added and the container is kept in a warm place to allow fermentation to proceed. The contents are then stirred in a cylindrical wooden barrel called “Pischpek”, which looks like a butter churn. The finished kumys are then transferred to leather bottles for storage. However, this traditionally manufactured product can only be kept for a few days. In Mongolia , the Airag is made by pouring the mare's milk through a cloth into a leather bag. The sack hangs at the entrance to the yurt . Alternatively, the traditional production takes place in a wooden barrel, the contents of which are stirred regularly.

For industrial production or at least for production under standardized conditions, the mare's milk is mixed with Kumys cultures. The use of goat milk is also possible. The cultures contain lactic acid bacteria , including Lactobacillus delbrueckii subsp. bulgaricus . The involvement of Streptococcus salivarius subsp. Thermophilus is called, these two bacteria are also used to produce yoghurt . They carry out a homofermentative lactic acid fermentation in which milk sugar ( lactose ) is broken down from the milk into lactic acid . The Kumys cultures also contain yeasts of the Torula genus . The yeasts carry out an alcoholic fermentation , during which sugar is converted into alcohol (ethanol) and carbon dioxide , the latter is called carbonic acid in dissolved form . The production is similar to that of yoghurt, after inoculation with the Kumys cultures, the mixture is incubated so that the fermentations can proceed. The lactic acid bacteria belong to the more thermophilic organisms, so the yogurt mixture is incubated at 43–45 ° C, but they also multiply at 30 ° C. As a rule, yeasts reproduce better at slightly lower temperatures (20–30 ° C), so that a medium temperature has to be found as a “compromise” for the microorganisms involved . Lactic acid bacteria and yeasts are also involved in kefir production, but they are of different types or subspecies .

According to Stahlberg's investigations, kumys, which is made from the milk of the "Kyrgyz steppe mares", contains after two days of incubation:

If you let the kumys continue to ferment, the remaining milk sugar is fermented too, so that after eight to ten days you get a drink that contains up to 3.23% alcohol, 1.86% carbonic acid and 2.92% lactic acid or other organic acids contains. At around 6.1%, mare's milk contains significantly more lactose than cow's milk (4.8%). Since this serves as a substrate for fermentation, the product kumys also contains more alcohol and lactic acid compared to kefir, which is made from cow's milk.