Lactic acid ( Latin acidum lacticum ) is a hydroxycarboxylic acid , so it contains both a carboxy group and a hydroxyl group . It is therefore also known as 2-hydroxypropionic designated by the nomenclature recommendations of the IUPAC , however, is the name 2-hydroxypropanoic to use. The salts and esters of lactic acid are called lactates .

Lactic acid has historically been used both in Europe and in Asia to acidify and preserve food, especially milk ( sour milk ), vegetables (e.g. sauerkraut ) and also for the production of silage as animal feed for centuries or millennia.

The first discovery and isolation of lactic acid goes back to the Swedish chemist Carl Wilhelm Scheele in 1780, who isolated it from sour milk in the form of a brown syrup. Meat lactic acid [ L - (+) - lactic acid] was discovered by Jöns Jakob Berzelius in 1808 and its structure was clarified in 1873 by Johannes Wislicenus . Henri Braconnot , a French chemist, found out in 1813 that lactic acid can be made in a fermentation process. 1856 saw Louis Pasteur , the lactic acid bacteria and developed the basic understanding of the lactic acid fermentation . Large-scale production of lactic acid began in the USA in 1881, and in 1895 Boehringer Ingelheim also made the discovery of how lactic acid could be produced in large quantities with the help of bacteria.

Lactic acid in the form of lactate is an important intermediate product in the metabolism , for example as a product in the breakdown of sugars through lactic acid fermentation . Around 250,000 tons of lactic acid are produced industrially around the world every year (as of 2010), which are mainly used in the food industry and for the production of polylactides (PLA; also: polylactic acids ).

Lactic acid forms intermolecular esters . Lactoyllactic acid is formed as a dimer with the elimination of water , which further esterifies to polylactic acid when left standing for a long time or when heated. However, these macromolecules do not reach any relevant chain lengths in order to be able to utilize the product technically. 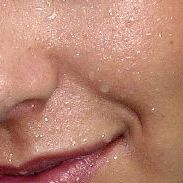 Sweat on a face

L - (+) - lactic acid occurs in sweat , blood , saliva, as well as in muscle serum, kidneys and bile . The racemate , a 1: 1 mixture of D - and L -lactic acid, is found, for. B. in sour milk and whey products, tomato juice and beer. In all products that are preserved by lactic acid fermentation , the proportion of the two enantiomers depends on the bacterial strain used and the reaction conditions.

Lactic acid can be produced both biotechnologically through fermentation of carbohydrates (sugar, starch) and synthetically based on petrochemical raw materials ( acetaldehyde ).

About 70 to 90% of the world production of lactic acid is currently fermentatively produced, both the pure enantiomers are commercially produced by fermentation process with lactic acid bacteria in significant amounts. As a rule, only one of the stereoisomers is formed in a strain-specific manner, but the enzyme lactate racemase can also lead to other mixing ratios.

One advantage of fermentative production is that - unlike synthetic production - it is stereospecific. In this way, the L -isomer, which is in greater demand for modern applications, can be produced with certain strains . 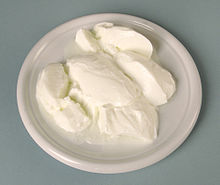 Yogurt and other sour milk products are made through lactic acid fermentation.

As a food additive , lactic acid bears the designation E 270. It is used in many different ways as an acidulant in the food and luxury goods industry, for example in baked goods, confectionery and occasionally in lemonades. By changing the pH value in the food to a pH of about 4, the food is preserved, as colonization with other microorganisms is largely excluded.

Shopping bags made of PLA - bioplastic

Lactic acid is the monomer of polylactides or polylactic acids (PLA), which are used in a variety of ways as biodegradable and bio-based plastics .

Lactic acid has an antibacterial effect and is therefore added to liquid soaps, detergents and dishwashing detergents . The disinfecting effect unfolds optimally at a pH value of 3 to 4. It was and is also used as a means of contraception.

Lactic acid is used as a descaling agent in the tannery for descaling hides. It is also used for this purpose in the textile industry and printing . Some cleaning tabs for coffee machines , water machines and similar devices that contain lactic acid as a lime remover.

Beekeepers use lactic acid to treat bees against the Varroa mite , whereby it must be ensured that the treated beehives or honeycombs are brood-free. Arachnologists use lactic acid to lighten the prepared epigyne of female spiders or other chitin structures and to dissolve remnants of tissue.

In cosmetics, lactic acid is used in skin creams and other products to treat acne .

If the skeletal muscles are exercised vigorously, the blood lactate content can rise from 5  mg / dl to 100 mg / dl. The reason is that under anaerobic conditions, such as when the skeletal muscles are exercised quickly, energy in the form of NAD + must be obtained from the reduction of pyruvate by means of lactate dehydrogenase in order to continue glycolysis . The resulting lactic acid (lactate and H + ) is flushed out of the cells via the monocarboxylate transporter 1 . This process was previously thought to be the cause of sore muscles , but today this theory is largely considered incorrect.

For humans, dextrorotatory L - (+) - lactic acid is the physiological one. Taken orally, it is broken down more quickly in the organism than the levorotatory D - (-) - lactic acid.