Uzbeks ( Uzbek Ўзбеклар O'zbeklar ) are a Central Asian Turkic people who mainly live in Uzbekistan and neighboring countries. There are around 30 million Uzbeks worldwide, who form the third largest Turkic people after the Turkey-Turks and the Azerbaijanis .

Origin of name and ethnogenesis 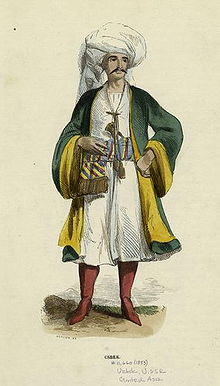 Uzbeks in traditional costume around 1846

The ethnonym "Uzbeke" is derived from Uzbek Khan , a ruler of the Golden Horde who came from the house of the Gengiskhanids .

The real people of the Uzbeks formed between the 15th and 16th centuries, when tribes led by a Mongolian Khan from the northern steppe areas invaded the already Turkic Transoxania . There the conquerors were quickly absorbed by the autochthonous Turkic and Iranian- speaking population. The predominantly Turkic-speaking nomads of this region came to the country between the 6th and 12th centuries and were generally very close to the Mongolian way of life.

The urban and oasis population, however, was mainly formed from Tajiks , who were close to the Iranian-Persian cultural area . When parts of the Turkic-speaking nomads settled down, they were quickly assimilated by the local and urban population . They also adopted the Iranian idiom of their Tajik neighbors.

Nikolai Wladimirowitsch Chanykow , a contemporary observer in the mid-19th century, discovered on his Central Asian travels in 1840 that the Uzbeks were made up of 97 tribes, of which about 28 should be in the area of ​​the Khiva Khanate .

Overall, today's Uzbeks define themselves in three groups according to their origins:

Today around 22.5 million Uzbeks (71% of 31.6 million inhabitants) live in Uzbekistan , the rest of the population are Russians , Tajiks , Kazakhs and other ethnic groups.

So-called classical shamanism was the oldest ethnic religion of the Uzbeks. The ethnologist Klaus E. Müller speaks here of "possession shamanism" and means those forms that have arisen through intensive fusion with other religions. Uzbek shamanism was largely reshaped by Islam. The specialty was ritual transvestism . There were also female shamans. Certain cultic peculiarities apparently go back to the ancient cult of the mother goddess Umai . Iranian influences are also recognizable (sun cult, especially painting of the drums). Shamans and healers used bell drums and whips (to drive out sickness spirits).

The Uzbeks today are predominantly Sunni Muslims of the Hanafi school of law.

Today's Uzbeks share a common history with the Kazakhs , who, like them, come from Western Siberia . Together their tribes invaded Transoxania several times around 1430. The tribes that lived north of the Syr Darya were under the leadership of the Muslim Abu'l-Chair Chan (1412–1468), who called the members of his tribal federation "Uzbeks". The Uzbeks replaced the Timurids as the ruling class in the areas they ruled . Abu'l-Chair founded the Uzbek Khanate . He saw himself in the tradition and as the successor of Uzbek Khan (r. 1322-1342), who introduced Islam into the Golden Horde and there united all tribes and hordes under his leadership.

But the northern nomadic tribes between the Aral Sea and the Volga were dissatisfied with the development. As early as 1459/60 and 1465/66 Uzbek tribal groups joined two Genghisid leaders, Janibeg (Janibek) and Girai, and moved to Mogulistan . After the death of Abu'l-Chair, other tribal groups followed them. They were called qazaq , the "wanderers". The Kazakhs founded the independent " Kazak Khanate " in the middle of the 15th century .

After the fall of the Scheibanids around 1599, Bukhara and Samarkand were ruled by the ruling house of the Janids , which had married into the Scheibanid dynasty. The Janids came from Astrakhan , from where they had to flee, and ruled the region until 1785. They had close ties with the Persian Sufi order since the 17th century and as a result the first Shiites came to the region.

The Uzbek tribes had been united in three Turkestan khanates since the 18th century . These khanates were culturally aligned with the Persia of that time and so the Persian language enjoyed great respect among the princes. The following states were ruled by the Uzbeks and were under the loose supremacy of the Persian Shah :

The wealth of Central Asia challenged the tsarist empire and they achieved extensive colonial conquests between 1852 and 1884. During the last decade of the 19th century, until the Soviet annexation, the Russians ruled the region on behalf of the Tsar. Russian rule over Central Asia was shared by the General Government of Turkestan and the General Government of the Steppe , as well as the semi-colonial administered emirates of Bukhara (Protectorate since 1868) and Khiva (Protectorate since 1873), whose external relations were controlled. At the end of the 19th century, so-called " Jadidism " also found its way into some of the Uzbeks. However, the majority of Uzbeks rejected this and invoked the Persian traditions of their areas.

In 1920 the Soviets abolished the Emirates of Bukhara and Khiva and replaced them with the Uzbek SSR by February 1925 . The administrative affairs of the republic were placed in the hands of young and progressive Uzbek intellectuals sanctioned by Moscow. An attempt by the Russians to destroy Muslim traditions created the desire for an autonomous government among the Uzbek people. This liberation movement worked closely with the Kazakhs and Turkmens and was suppressed by the Red Army. But during this time the Uzbeks slowly developed an independent national consciousness and they began to grow together into one nation.

During the Soviet era, the country became mainly a source of raw materials (cotton, etc.), for the exploitation of which many factories were made. It went through collectivization and industrialization . In the late 1930s its population was subjected to the Stalinist purges . At the end of the Soviet era, these efforts left the havoc on the land and the region's water resources. The drying up of the Aral Sea is an example of this. The residual water of the Aral is so toxic that the then regional Soviet government forbade the caracalpaks living on the Aral Sea to use the water for food preparation in the 1980s. From around 1983 a corruption scandal rocked the then Uzbek SSR, as a result of which the Uzbek party leader Sharaf Rashidov committed suicide in Moscow . Rashidov was considered an outspoken Stalinist and he established a similar personality cult. Rashidov was venerated as Otaxan , the "father of the Uzbek nation". But this scandal also reached into the family of former President Leonid Brezhnev . This scandal was triggered by the fact that Uzbekistan received around one billion rubles for cotton between 1978 and 1983, although it never produced it.

Upheaval in the Soviet Union

From 1988 Mikhail Gorbachev began his policy of perestroika . The Union republics were given more decision-making options and the administrative structure was gradually decentralized. However, due to the corruption scandal that became known in 1983, Uzbekistan was considered the “cradle of systematic purchasability”.

In November 1988, 18 liberal intellectuals founded the Birliq (“unity”) organization, an extra-parliamentary citizens' movement that quickly became very popular. At the first large demonstration on March 19, 1989, “Birliq” reached around 12,000 Uzbeks. As early as 1990 this citizens' movement is said to have had over 600,000 members. A number that has been repeatedly denied by the state.

In 1989 a pogrom, fueled by the then Uzbek government, took place in the Uzbek Ferghana Valley against the Meshes , who were forcibly resettled in 1944 , in which around 100 died.

Uzbekistan gained independence in 1991. Since then, the country has diversified its economy, developed its natural gas and oil resources, and moved towards industrialization. In 1993 border disputes between Uzbekistan and its neighbors began at short notice. But while the conflicts with Afghanistan , Kazakhstan and Turkmenistan were quickly resolved peacefully, they were not ended with neighboring Kyrgyzstan . There are regular civil war-like uprisings of the Uzbek minority in Kyrgyzstan and the Kyrgyz minority in Uzbekistan. Re-Islamization also took place in Uzbekistan when a section of the “ Islamic Party of Rebirth ” was founded there in 1990/91 and the state opposed its existence.

Uzbekistan has friendly relations with its northern neighbor Kazakhstan. After the minority of Karakalpaks extensive minority rights were granted, the feared breakup of Uzbekistan was averted. Previously, this ethnic group insisted on the withdrawal of their Autonomous Republic from Uzbekistan and the transfer of state foreign representation to the Kazakh state. However , the majority of the Slavic minorities (especially Russians and Ukrainians ) have already left the Central Asian country.