Khanate (Turkish-Neo-Latin) or Chanat ( Persian خانات chānāt , Turkish Hanlık ) is the name for the historical state structures of the Turkish and Mongolian tribes in the sense of a medieval feudal state . They wereruledby a Khan (or Chan ), which is where the name comes from. For comparison for similar European state structures z. B. be called a principality or a kingdom .

A khaghanate (chaghanate) was larger and more powerful than a khanate - the relationship is comparable to that of a kingdom to an empire. 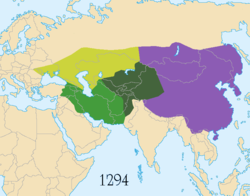 Successor to the Mongol Empire:

The great empires of the Mongols :

Khanates in the Caucasus, particularly Azerbaijan; They gained independence from Persia after Nadir Shah's death in 1747 and later annexed by Russia :

Map with khanates in the Caucasus (French), 2011

There are many historical states that were khanates, but for which the use of 'Reich' has become established (in German). These include (in the 10th – 12th centuries) the early Turkic-Mongolian empires of the Pechenegs , Keraiten , Merkites , Kara Kitai , Tatars and Naimans .