from Wikipedia, the free encyclopedia
This is the spotted version , flagged on January 5, 2020 . There are 2 pending changes that have yet to be viewed.

Location of the Kara Kitai Empire around 1200

The Kara-Kitai or Kara-Chitai ( DMG Qara-Ḫitai , German "black Kitai") were a dynasty that founded a great empire in Central Asia - from the south of today's Kazakhstan to today's Xinjiang - and decisively shaped the era from 1128 to 1218 until their empire was conquered by Genghis Khan .

The Kara (ie black) Kitai descended from the Kitan nomads who formed the Liao Empire in northeast China and Mongolia between 907 and 1125 . After the defeat of this empire by the Jurds in 1125, some of the tribes were driven to the west, where they re-formed as Kara-Kitai. Some historians therefore refer to the Kara Kitai rule as the “Western Liao” (Xi Liao) and the period up to 1125 in northeast China as the “Northern Liao”. 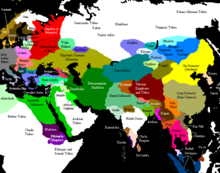 They were initially called in by the eastern Karakhanids (ie "Black Khan ") against nomadic insurgents, but soon defeated the Karakhanids themselves and occupied large parts of Kashgaria and the Seven Streams . Under Khan Yelü Dashi (Yel-Lü-Tashih, ruled 1124–1143), a new steppe kingdom was founded in the Seven Rivers, whereby the administration of nomads and farmers was strictly separated. The capital was Balasagun in what is now Kyrgyzstan .

When there were attacks on the western Karakhanids in Transoxania after 1137 , this soon led to a clash with the Seljuks . These were badly beaten by the Kara-Kitai in the Katwansteppe in 1141 . Thereupon both the Khorezm Shahs and the (at that time no longer relevant) Karakhanids in Transoxania recognized the suzerainty of the Kara-Kitai. The Kara-Kitai were Altaians , an equestrian people from the steppe, to whom the mountains seemed eerie as the place of the dead. “They worshiped a mountain and war god and besides the earth goddess also other gods. The main cult was dedicated to the sun. The Kara-Kitai had their own script and must have had a developed literature and art. Unfortunately, in the following centuries the cities of the Kitai state were devastated in wars and uprisings, and no library survived the perils of time. "

After the height of the empire around the middle of the 12th century, there were fights with the choirsmen, who had freed themselves from the suzerainty of the Kara-Kitai and who were able to conquer Transoxania after uprisings in the cities. In 1210 the Kara-Kitai were defeated by the Choresmiern under Muhammad II , whereupon the Naimanenprinz Kütschlüg , who was popular at the court, placed his father-in-law, Khan Yelü Zhilugu (r. 1178-1211) under house arrest in a series of army revolts.

Kütschlüg was able to assert himself until 1218, before the people of his empire voluntarily submitted to the advancing Mongols due to his measures against the local tribes and his persecution of the Muslims in Kashgar and Chotan (he was a Nestorian who converted to Buddhism ) and he was killed while fleeing has been. He had a long-standing rivalry with Genghis Khan , as he had opposed its expansion before he had to flee to the Kara Kitai.

The Kara-Kitai continued to exist on the edge of other domains, however, possibly until the 14th century, when Timur Lenk conquered the Chagatai Khanate from Samarkand .