This article deals with the administrative district. For further meanings, see Hotan (disambiguation) .

Hotan , or Khotan, is a Chinese administrative district in the south of the Uyghur Autonomous Region of Xinjiang in the northwest of the People's Republic of China with a total area of ​​248,946 km² and 2.53 million inhabitants (end of 2018).

Its capital is the city of the same name, Hotan , which was the capital of the Kingdom of Hotan from the first to the 10th century AD . The Silk Road , which led from China to Europe, passed through Hotan .

97 percent of the population of Hotan are Uyghurs. 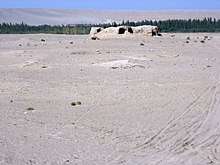 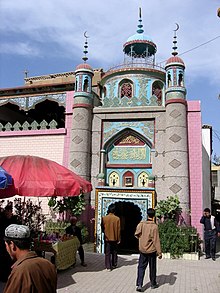 The early history of Khotan is dark; later, Buddhist legends are of no historical significance. The kingdom of Khotan first appears in Chinese sources around the birth of Christ. It is reported that under Wudi a Khotanese embassy visited the Chinese court. At this time, Khotan already had dominance over parts of the western Tarim Basin, King Guangde (廣 德, Guǎngdé) even conquered Yarkant in AD 61 . Due to the troubled political situation, Guangde 73 accepted Chinese military protection, and in return Khotan paid tribute to China for centuries.

In the 3rd century, according to the Weilüe report, Khotan still ruled several kingdoms in the southwestern Tarim Basin, around 400 the Chinese pilgrim Faxian described Khotan as a rich country with countless Buddhist monasteries, similar descriptions were given on Songyun in 519 and Xuanzang (644). In the Tang Dynasty , China's interest in the Tarim Basin increased again, which is why a Chinese garrison was stationed in Khotan in 648 as part of the " Four Garrisons of Anxi ". In 670 Khotan fell briefly under Tibetan rule, which was then replaced by China around 700, before it was re-conquered by the Tibetans around 790. In the following years Khotan was hit by the general decline of the Tarim Basin.

In the middle of the 9th century, Uyghurs who migrated west after the fall of their kaganat came and established a kingdom in Kocho that encompassed the eastern Tarim Basin, including Khotan. The state religion was Manichaeism brought with them by the Uyghurs, and the Turkicization of the area continued. In the 11th century the advancing Karakhanids conquered the city, from 1130 the Kara-Kitai took over the rule. After that, Khotan belonged to the Chagatai Khanate , Moghulistan and the Djungarian Khanate . After the defeat of the Djungars against the Qing , Khotan came to China.

1862–73 the region was involved in the Dungan uprisings. 1934–37, "Tunganistan" with the capital Khotan was proclaimed an independent region in southern Xinjiang .

The following important information is missing from this article or section:
recent history, especially times when the subject of this article itself existed
Help Wikipedia by researching and pasting it .

Ancient Khotan has left a multitude of archaeological traces. At the beginning of the 20th century, Aurel Stein and a little later a Japanese expedition carried out the first excavations here. Some of the Tarim mummies were found here. Several archaeological complexes exist in Khotan. The largest is the old capital Yotkan 8 km west of the heugtigen Khotan; There are several other complexes in the area, including Farhad-Beg Yailaki with a stupa and a temple and the complex of Dandan Uiliq , where several residential buildings, cult facilities and important Buddhist texts written in Saki and Sanskrit as well as Chinese documents from the period from 781 -789 were found.

Administratively, the administrative district is made up of a city and seven districts. These are (inhabitants and area data from 2006):

District level and suburbs of Xinjiang