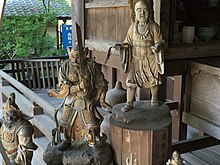 The name Faxian means " Dharmaglanz " and was only his spiritual name, his real family name was Gong ( 龔  /  龚 ,).

Faxian allegedly wandered 30 countries since 399, u. a. the Gupta empire with its capital Pataliputra , where there were two Buddhist monasteries. His descriptions are an important source about ancient India. Finally he embarked in Calcutta for Sri Lanka in 411, from there he traveled on to Sumatra and so returned to his homeland in 413 with many holy books in his luggage, which he translated into Chinese on his return .

On his return he landed in Laoshan in what is now Shandong Province , 30 km east of Qingdao, due to poor weather conditions . From there he traveled on to the then capital of Shandong Qingzhou , where he translated the scriptures he had brought with him for a year.

He describes his trip in the Fóguó Jì ( 佛 國 記  /  佛 囯 记 , "Report on the Buddhist Kingdoms"), a report from his travels to today's India and Sri Lanka in search of books on Buddhist teaching. The work was translated by Jean-Pierre Abel-Rémusat in 1836 and published as Foĕ kouĕ ki ou Relation des royaumes bouddhiques (Paris).