Pataliputra ( Sanskrit : पाटलिपुत्र, Pāṭaliputra; Pali Pataliputta , Greek Pali (m) bothra ) was a city on the south bank of the Indian river Ganges , today's Patna in the state of Bihar . In ancient times it was the capital of the Indian kingdom of Magadha and later of the Maurya empire.

Pataliputra was originally the village of Pataligrama (Pali: Pataligama) at the mouth of the Son in the Ganges . According to the Mahaparinirvana Sutra, the legendary Ajatasattu , the king of Magadha , is said to have expanded it into a city and fortified it near Rajagrha . His son Udayabhadra (or Udayin) made Pataliputra the capital of the empire. Pataliputra was also the capital under the subsequent Maurya dynasty. Around 300 BC The Seleucid king Seleukos I Nikator tried to conquer the Maurya empire , but had to surrender to it and its king Chandragupta left two eastern provinces of his empire. He sent the historian Megasthenes to Pataliputra as an ambassador, to whom we owe a very detailed description of the city. 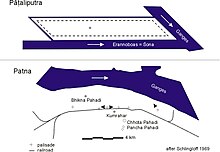 Ideal plan from Pataliputra to Megasthenes and Mahbhasya (above); archaeological sites in Patna (below).

The expanded Kingdom of Magadha with Pataliputra as one of its capitals.

Megasthenes estimated the size of Pataliputra to be 80 × 15 stages (15 × 3 kilometers). Around the city there was a 40 kilometer long palisade wall, which was later supplemented by a brick wall. The pebble-paved streets were arranged at right angles to each other. Pataliputra consisted of sixteen quarters, each of which was home to a different craft guild. Some of them owned small tree-covered areas where people came together for the market. Towards the city center, where the royal palace was located, many officials and nobles lived in their magnificent, sometimes multi-story houses. These often had small gardens and ponds where people could relax. Directly at the palace, however, were only the apartments of the musicians and courtesans of the king and all public buildings. These were separated from the palace by canals, which eased the heat in the city. The temples for various deities had been built on the squares, perhaps also for the Greek traders resident in the city. As foreigners, they were considered outcasts, but were under the protection of the king and therefore enjoyed a certain reputation among the locals.

In 253 BC The third Buddhist council took place in Pataliputra. The city was an important center of early Buddhism .

It is not known exactly when and why the ancient city perished. The Chinese Faxian , who visited Pataliputra as a pilgrim in the 5th century, describes it as a "prosperous city"; however, another Chinese traveler, Xuanzang , reports only ruins two hundred years later. It is likely that Pataliputra was either abandoned in favor of another capital or destroyed by the Hephtalites . An earthquake can also be considered.