The title of this article is ambiguous. Further meanings are listed under Bihar (disambiguation) .

Bihar ( Hindi : बिहार, Bihār [ bɪˈhɑːr ]) is an Indian state with an area of ​​94,163 km² and around 104 million inhabitants (2011 census). Its capital is Patna , the ancient Pataliputra . Bihar is considered the poorest and most socio-economically underdeveloped state in India.

Bihar borders the states of Uttar Pradesh (west), Jharkhand (south) and West Bengal, as well as Nepal to the north .

The state is hit by monsoons every year , often affecting millions of people from flooding.

Children in a village in Bihar

According to the 2011 Indian census, Bihar has 103,804,637 inhabitants. In terms of population, Bihar is the third largest state in India after Uttar Pradesh and Maharashtra . The population is growing rapidly: between 2001 and 2011 it increased by 25.1 percent. This makes the growth rate one of the highest of all Indian states and is above the national average of 17.6 percent in the comparable period. Bihar is extremely densely populated: an average of 1102 people live in one square kilometer. The population density is thus the highest of the Indian states and almost three times as high as the overall Indian average of 382 inhabitants per square kilometer. A large part of the population is concentrated in rural areas: only 11.3 percent of Bihar's population live in cities. The degree of urbanization is thus one of the lowest in India and significantly lower than the national average of 31.2 percent.

Bihar is one of the poorest and most backward areas of India. The literacy rate is the lowest of all Indian states: only 63.8 percent of Bihar's residents can read and write (men 73.4 percent, women 53.3 percent), while the overall Indian average is 74.0 percent. However, significant improvements can be seen here. The literacy rate rose between 2001 and 2011 from 47.0% to 63.8% (+16.8%) - the strongest increase among all Indian territorial states. Targeted abortions of female fetuses , which lead to a distorted gender ratio, are problematic . In Bihar there are only 916 women for every 1,000 men. In the period from 2010 to 2014, the average life expectancy was 68.1 years (the Indian average was 67.9 years). The fertility rate was 3.37 children per woman (as of 2016) while the Indian average was 2.23 children in the same year. Bihar had the highest birth rate of all states in India.

Bihar census population (within today's limits) since the first census in 1951.

The official language of Bihar is Hindi . According to the 2001 Indian census, 73 percent of Bihar's population speak Hindi as their first language. In fact, they are mostly speakers of languages ​​from the Bihari group (mainly Bhojpuri and Magahi ). These regional languages, which are closely related to Hindi, are officially counted as Hindi dialects by the Indian government. Maithili , which linguistically also belongs to the Bihari languages, is no longer considered a Hindi dialect since 2003, but as an independent language and has been recognized as one of 22 national languages ​​of India. In Bihar, Maithili is spoken by 14 percent of the population. Among the Muslims of Bihar, Urdu , the Muslim variant of Hindi written in Arabic script , is widespread with 11 percent. All languages ​​mentioned belong to the Indo-Aryan language group. A smaller group of tribesmen ( Adivasi ) in the border area to Jharkhand speak the Munda language Santali , whose speakers make up 0.5 percent of the total population. As in all of India, English is ubiquitous as a communication and educational language.

According to the 2011 census, 83 percent of Bihar's population are Hindu . There is also a larger minority of Muslims who make up 17 percent of the population. Other religions are practically absent with a share of 0.4 percent.

In the Middle Ages, Bihar formed its own powerful empire and was incorporated into the Mughal Empire after 1525 , but ceded to the English East India Company in 1765 . At that time it corresponded to its location after the old kingdom of Magadha (with the capital Pataliputra ), where the founder of Buddhism in the 6th century BC. BC first presented his teachings and that was the oldest and for a long time the main seat of the Buddhist religion. The landscape owes its importance to this fact. They were adorned with the most beautiful buildings and religious monuments; later they fell into disrepair, and some of the ruins covered with creepers could only be found with great difficulty, as Brahmanism , which had replaced Buddhism here since the 8th century AD, destroyed all witnesses of the splendor of the earlier religion.

The rule of the British East India Company began in the 18th century, starting from neighboring Bengal . The area of ​​today's Bihar was administratively annexed to the Bengal presidency and in 1912 it became part of the province of Bihar and Orissa . In 1936, the Orissa area was carved out as a separate province. After India became independent in 1947 and the Indian Constitution came into force in 1950, Bihar became a federal state. In 1956, smaller Bengali-speaking border areas had to be ceded to the neighboring state of West Bengal in the States Reorganization Act . After there had been efforts to secede for a long time, the southern part of Bihar was spun off on November 15, 2000 and a new federal state under the name Jharkhand .

For years, the situation in Bihar has been characterized by violent clashes between the militias of various political parties, private armies of the large landowners and Maoist rebels .

Since April 2016, there has been a strict alcohol ban in all of Bihar ; Since July 2016, the use of mass wine is no longer tolerated in Christian churches. 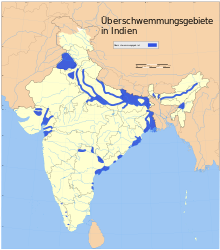 At the end of August 2008, after weeks of monsoon rains and a large dike breach on the upper reaches of the Koshi River in Nepal , widespread flooding occurred . The floods in over 1,600 villages across the state have left over 1.2 million people homeless and hundreds of people dead. India's Prime Minister Manmohan Singh described the floods as a “national disaster” and mobilized over 5,000 soldiers to evacuate over 90,000 people. He promised aid deliveries of 125,000 tons of grain and financial aid equivalent to around 155 million euros.

The legislature consists of a bicameral parliament - Vidhan Sabha (lower house) and Vidhan Parishad (upper house). The 243 members of the Vidhan Sabha are elected for 5 years in as many constituencies according to relative majority voting. If a member of parliament leaves prematurely, a by-election takes place. Another MP is appointed by the governor to represent the Anglo-Indian minority.

Until the early 1990s, Bihar’s politics was dominated by the Congress Party (INC). After Janata Dal was founded in 1988, it won a majority in the state. In the 1990s, the Janata Dal split into numerous successor parties. Two of these parties, the Janata Dal (United) (JD (U)) and the Rashtriya Janata Dal (RJD) have been the main political parties in Bihar since then and have alternated in government at irregular intervals. Both parties are relatively strongly influenced by caste and client thinking. The Bharatiya Janata Party (BJP) also plays an important role. In contrast, the political weight of the Congress party has decreased significantly. Between 1998 and 2013, JD (U) and BJP were allied within the National Democratic Alliance , while the RJD was temporarily associated with the Congress Party. In 2013 the alliance between BJP and JD (U) broke up and they both went their separate ways.

In the 2015 election to the Parliament of Bihar, which took place on five separate days between October 12 and November 5, 2015, the RJD, Congress Party and JD (U) competed in an alliance, the “Grand Alliance”, against the BJP and won the vote. However, this coalition broke up at the end of July 2017 and a new coalition was formed from JD (U), BJP and the small Lok Janshakti Party (LJP). The Chief Minister remained the same.

The incumbent Chief Minister has been Nitish Kumar (JD (U)) since February 22, 2015 , who has already held this office several times.

Map of the districts of Bihar

The state of Bihar is divided into the following 38 districts (population and population density according to the 2011 census):

Bihar is one of the poorest Indian states. The per capita income was 26,801 rupees in 2015-2016, which was only about a third of the Indian mean (77,435 cents) and the state was last in India. Despite high economic growth, the gap to the other states has hardly decreased in recent years. The gross domestic product (at 2011-12 prices) amounted to 3.143 trillion rupees (approx. 44 billion euros) in 2015, to which the primary sector contributed 18.3 percent, the secondary sector 18.1 percent and the tertiary sector 59.9 percent. In recent years the share of the primary sector has decreased and that of the tertiary sector has increased accordingly. There is significant economic inequality within Bihar. The three wealthiest districts in 2007-12 were Patna , Munger and Begusarai , the three poorest are Madhepura , Supaul and Sheohar .

With a score of 0.551, Bihar ranked last among the 29 states and union territories of India in the Human Development Index in 2015 .

Bihar is the largest lychee producer among the states of India 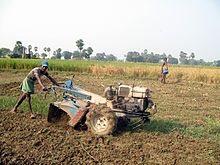 Tea cultivation in Bihar has also increased since around the year 2000 . The cultivation area is the Kisanganj district , where tea is harvested on 50,000 acres . The annual production is around 2,300 tons (2015).

With the separation of the southern part of the country as the new state of Jharkhand in 2000, Bihar lost most of its natural resources and the associated (heavy) industry, which was mainly located in Jharkhand. A significant part of today's Bihar industry is involved in the processing of agricultural products. In the period 2013-14 this was 1036 out of 3132 factories. A significant part of the small industries is not registered and is therefore not recorded statistically. The contribution of industry to Bihar's gross domestic product was 19.0% (2015), well below the Indian average (31.3%). Among the non-agricultural-based industries there is the weaving and textile industry, which is concerned with the processing of cotton, silk, wool and jute and is largely carried out by hand as a small industry. There are mechanical textile industries in Bhagalpur , Banka and Gaya .

The governments of Bihar have pushed the development of the infrastructure in recent years. Investments in roads and bridges increased between 2007 and 2008 from 2696 to 7696 crore rupees in 2016-17. In September 2016, the road network comprised 4,621 kilometers of national highways , 4,253 kilometers of state highways and 11,054 kilometers of main district roads. The National Highways were about 30 percent multi-lane (> 7 meters wide) and 41 percent two-lane (7 meters wide), the State Highways were 78 percent and the district roads were 14 percent two-lane. The rest was made up of single-lane (3.75 m) and intermediate roads (5.5 m).

Energy consumption has risen sharply for several years, parallel to economic development. In the three years 2012–13 to 2015–16, the rate of increase was 78 percent. The government's plans envisaged an energy generation capacity of 8925 MW for 2018-19, of which 8220 MW conventional and 705 MW (8%) non-conventional energy. In March 2016, 86.4 percent of the energy was generated in coal-fired power plants, 9.7 percent came from hydropower and 3.9 percent from renewable sources . Most of the energy industry was state-owned. The use of solar energy is still in its infancy. In 2013-16, various central government buildings, including the residences of the Chief Justice House , the Governor House , the Chief Minister's House and others, were equipped with solar systems, as well as more than 10,000 solar-powered street lights in total State installed. 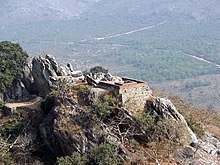 Bihar's potential for tourism is considerable due to the multiple sights, but has so far only been insufficiently exploited. In 2015, 2.9 million tourists visited the state, of whom 923,000 were from abroad.