The title of this article is ambiguous. Further meanings are listed under Acre (disambiguation) .

Acre ( plural German Acre or Acres; English acre , plural acres ) is one of the British Isles derived Anglo-American unit for area determination of land and is roughly 4047  m² or 40.47 Ar . In addition to the acre, in today's Anglo-American area measurement system, practically only the square foot unit is used for land and ground surveying ; in the United States , the size of a property is measured in these two units of area alone. These units are also widely used in Great Britain , Canada , India , Australia and other Commonwealth countries, although there is now a main metric system of measurements. 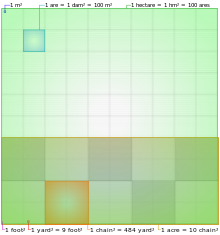 Comparison of some units of area with the acre.

Nowadays the acre is directly defined as 43,560 square feet because the length measures furlong (= 660 feet) and chain (= 66 feet) used for the original definition are now uncommon.

The acre is the main measure of land area. As a rule, no more than two decimal places are given, giving an accuracy of ± 20 m². As soon as more precise information is required, for example in the case of building land, the square foot unit is used.

Acre as the basis for derived units

The unit acre, from Old English æcer , field, originally referred to the strip of land that could be plowed in one day by a team of oxen. Under King Edward I and again under Edward III. and Henry VIII , the acre was legally established as a piece of land 40 rods (or perches; = 1  furlong or 660 feet) and 4 rods (or perches; = 66 feet or [since 1620] 1 chain ) wide  ) or 160 square rods, whatever the shape of the property is defined.

With its size of roughly 40  ares , the acre is typologically comparable with the morning , the daily work (or Tagwan ), the yoke (or Juchart ) and the man work .

The Anglo-American units of length, which differ throughout the world, were standardized in 1959 . In the United States, this resulted in an increase in the length measures used up to then by a factor of 1.000002 compared to the new "international" length measures. In the case of land surveying, this would have led to noticeable differences at great distances. For a route length of 1000 km the difference would be 2 m. In order not to have to change the existing values, the old system of measurement was therefore retained in the United States - only for the purpose of land surveying - and the previously used measure of length Foot was given the name Survey Foot .

The US Survey Foot will be abolished on December 31, 2022. From then on, only the International Foot may be used, which is officially referred to as the Foot from this point in time .

Although the size of the acres in the British Isles has been defined as 160 square rods since the High Middle Ages, its area was inconsistent depending on the place and time, since the unit of length rod or perch corresponded to different foot equivalents. It was only with the redefinition of the Imperial Units through the Weights and Measures Act of 1824 that a uniform acre was created for the entire British Empire.

Before the introduction of the Imperial Standard Acre (Statute Acre) there was, among other things, the old Scottish acre, the new Scottish acre, also known as Cunningham Acre, or the Irish or Plantation Acre. For example, the Cunningham Acre is about 1.3 times the size and the Plantation Acre roughly 1.6 times the size of today's acres. Some of these obsolete measures were in use well into the 20th century, for example in remote areas of Ireland.