Countries according to the current status of the introduction of the metric system:

Important examples of metric systems of units are the International System of Units (SI) , the CGS and the MKS system . The first metric system of units was introduced in France in 1793 during the French Revolution and is now used in all countries. Only the USA , Myanmar and Liberia have not yet made it mandatory ; in other countries such as the United Kingdom , Canada or the Philippines it is still in competition with older systems of measurement.

Thus the currently most important and almost worldwide valid international system of units is based on the MKSA system , which is an extension of the MKS system by the ampere .

The international standardization of the system of units prevents misunderstandings when dealing with sizes and units and makes size values ​​directly and precisely comparable. This is important for science and technology as well as for industry and trade.

A uniform and self-contained, i.e. consistent system of units is of great use for both international and domestic scientific and economic exchange, for example to avoid error-prone conversions and misunderstandings due to ambiguous information. In the area of ​​what would later become the German Empire, around 300 different surface dimensions existed until 1870. Units with the same name were or are different. For example, German horsepower (PS) is not the same as British horsepower (HP), and for centuries there have been different definitions for a mile in the various areas of application and regions. Various scales were used to measure the temperature.

The Stuttgarter Zeitung already pointed out the advantages of a uniform system of measurement in 1871 in relation to changes in the law at that time. According to the article, the metric system of measures and weights is “a self-contained, naturally articulated whole. The meter is the trunk from which all length, area, body, hollow and weight dimensions develop in beautiful symmetry like branches and twigs, and it itself is rooted in the proportions of the earth. " 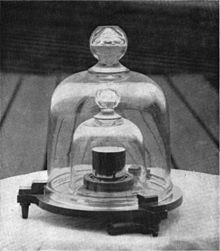 In China and parts of India there were decimal systems already in ancient times . Proposals to create a purely decimal system of measurement had existed in modern Europe since around the end of the 16th century. But until the end of the 18th century, preference was given to the old systems of measurement, which were based on highly composite numbers . But these were neither international nor value systems . However, modern economics and administration made both appear desirable for increasing efficiency. That is why the decimal metric system was introduced in revolutionary France under the bourgeois reign of terror on August 1, 1793 in the National Convention .

In the 19th century z. B. in the Rhine Confederation only made preparations for the introduction of the French decimal system, for example by decimalizing the respective local or introducing a round, z. B. 30 cm feet. Only towards the end of the 19th century did the decimal metric system gradually gain acceptance internationally. The Meter Convention was signed in Paris on May 20, 1875 , a diplomatic treaty between the 17 leading industrial nations, which agreed on uniform standards for the most important sizes. Without this measure, the further development of the industrialized world might have been impossible, because nationally different units would have made international trade and scientific and technical exchange extremely difficult. The meter convention is still valid and is the basis of the International System of Units (SI). The international organization “ Bureau International des Poids et Mesures ” (BIPM) was commissioned to maintain the standards laid down in the Meter Convention .

In 1874, the coherent CGS system with three base units, derived units and the prefixes “micro” to “mega” was established in Great Britain . Since the previous units had proven to be too complicated, additional “practical units” were introduced in 1880 for the fields of electricity and magnetism, including ohms , volts and amps .

At the first “ Conference Générale des Poids et Mesures ” (CGPM) in 1889, meters, kilograms and seconds were defined as the international base units ( MKS system ). The new prototypes for the meter and the kilogram have been approved and distributed to the member states. The so-called international meter prototype replaced the original meter from 1799 and remained valid until May 19, 2019. Both are kept in a safe of the BIPM in Sèvres near Paris.

In 1946 the ampere was finally added as a further base unit ( MKSA system ), and in 1954 Kelvin and Candela followed . In 1971 the mole was decided as the last basic unit for the time being .

In 2019 there was a fundamental redefinition of the units kilogram, kelvin, ampere, candela and mole. Four other natural constants were given fixed values.

Spread of the metric system

Introduction of the metric system by the year

The introduction of the metric system began in France . The meter was legally introduced in Paris in 1799. The introduction was temporarily reversed. However, the radical changeover of the times and the calendar to a decimal system did not take hold (among other things, a week should consist of ten days).

In the 19th century the metric system was introduced in most European countries: in parts of Germany during the French occupation before 1815 (for example the Palatinate, where it remained after the defeat of Napoleon), in the Netherlands , Belgium and Luxembourg in 1820, in Spain in the 1850s, in Italy in 1861, in Germany in 1872 (law of August 17, 1868 for the North German Confederation, April 29, 1869 for the southern German states), in Austria in 1876 ​​(binding, law published in 1871), in Switzerland in 1877 (legalized 1868, made binding by federal law of 1875; cantonally, however, in part already introduced during Napoleonic times) and finally in Denmark in 1907 . The United Kingdom is the last European country to be converted; in Ireland it was completed on January 20, 2005 with the conversion of road signs (km instead of miles). In the English-speaking world, the introduction is referred to as “metrication” or “metrification”.

Today the metric system is used in almost all countries. Only the USA as well as Myanmar and Liberia have not yet made it mandatory, although it is used in practice by the latter two. Myanmar decided to switch to the metric system in 2013. In the United States, metric units have been recognized units since a parliamentary decision in 1866 and a government decree in 1894. On December 23, 1975, the US Congress-approved Metric Conversion Act was signed by President Gerald Ford in the United States , but the traditional system is largely maintained.

Resistance to the introduction, mostly for traditional or aesthetic reasons, has existed or is particularly evident in the USA, the United Kingdom, Canada (except Québec ) and Japan . Relics of ancient systems can be found in many countries, e.g. Sometimes in the form of redefined (“metrified”) units (e.g. pounds at 500 g) and partly due to the influence of the US economy ( inches , e.g. for screen size specifications). This procedure is widespread, but it contradicts the legal situation. Therefore, US federal agencies typically require the use of the metric system when awarding contracts (e.g. when submitting technical documents for tenders).