The time is the specification of a point in time ( time ), usually expressed in hours , minutes and seconds from midnight of a day in the calendar system . It is determined depending on the location - today the zone time of the time zone , previously true or mean local time . Today the day is divided into 24 hours, the hour into 60 minutes and the minute into 60 seconds.

The time and calendar date give a clear indication of the time.

Until the middle modern period, other hour counting than the current 24-hour counting was widespread. At the time of the French Revolution , an unsuccessful attempt was made to divide the day into 10 hours of 100 minutes and 100 seconds.

In the scientific and technical field, the time is sometimes given as a decimal part of the day ( decimal time ). 6 a.m. B. then corresponds to 0.25 days. There is also a consecutive number of days instead of a calendar date.

The zero point of the time was still at noon until the end of the 19th century (because this can be more easily determined by observing the sun).

The notation of times in the office and administration area is regulated in Germany by DIN 5008 (which also regulates the date format ). It divides the parts of times with colons. DIN 5008 recommends specifying hours , minutes and, if necessary, seconds with two digits. If only the hour is given, a leading zero should be omitted. The designation "clock" must always be separated by a space ( protected if possible ).

The way times are written in documents in business, administration, science and in the private sector is regulated in Austria by Ö-NORM A 1080 "Guidelines for text design" (which also defines the date format ). It divides the parts of times with colons. It recommends specifying hours , minutes and, if necessary, seconds with two digits, especially in tables. No leading zero is given for hours in the running text. The designation "clock" must always be separated by a (preferably) protected space .

According to the spelling instructions of the Federal Chancellery (which applies to publications of the federal administration), a period and not a colon should be used between the hours and the minutes. Furthermore, for times between one and nine o'clock, the preceding zero is usually left out (exception: times in lists).

A word clock shows the time as a sentence

The notation used in the English-speaking world and Latin America divides the day into two twelve hours (so-called 12-hour representation ). In order to distinguish the hours in the afternoon from those in the morning, the abbreviations am (from Latin ante meridiem "before noon") and pm (from Latin post meridiem "after noon") are used. As with the pointer watch, only the numbers 1 to 12 are used for the hours ; there is no hour 0 . The leading zero is optional for the single-digit hours.

In the Bundeswehr and the NATO which is used Date-Time Group format. The term tactical time is based on the custom of the military and other authorities and organizations with security tasks to designate the symbols they use as tactical signs . With this notation, the minutes are attached directly to the hours. Instead of 6:00 am, 0600 is written (pronounced “zero six hundred”), 0630 (for 6:30 am) is pronounced “zero six thirty”.

Oral use usually uses the 12-hour format, whether morning or afternoon is meant usually depends on the context. Only if necessary is the information in the morning , noon , in the afternoon or in the evening added for a clearer distinction in cases of doubt , particularly often the information at night (eg "two o'clock at night").

Regionally, different designations are common for times that do not indicate full hours (partial hours). So is 5:15 p.m. in western Germany, i. H. more precisely west of the Lübeck - Saarbrücken line , as well as in parts of Bavaria and Baden-Württemberg, in Switzerland, in Liechtenstein and in western Austria usually referred to as "quarter past five" (in parts of Austria also "quarter over five" and in Switzerland dialect " quarter from foifi »). East of the line is said "quarter to six". Similarly, the usual designation for 5:45 pm in the west is "quarter to six" and to the east of the line and in eastern Austria "three quarters six". Details that are accurate to the minute are often related to the full or half an hour, i.e. around 5:40 am: “twenty to six” or “ten past five thirty”, but also to the quarter of an hour such as “five to three quarters of six”.

When reading the digital notation 17:15, it is generally said “five fifteen pm”, also abbreviated “seventeen fifteen”, literally (for example with time announcements) “five o'clock [and] fifteen minutes”. Less often, the hours of the 24-hour counting are translated into the 12-hour counting , which is more common in daily use (about “five fifteen [afternoon]” for 17:15).

In common parlance, the word “at” describes the exact time: “at five” or “at half past five” means exactly 5:00 p.m. or 5:30 p.m. If a time window is to be indicated around an exact time , e.g. For example, when it comes to the time of a meeting, the standard language used is the word “against”: “We'll meet around half past five” or “We'll meet around five thirty”. A certain inaccuracy can also be described with the expressions “around…” and “around…”: “around (the) five (around)” means “around five o'clock”. In casual High German colloquial language, this can also be expressed as “around five”. Similarly, a distinction is made in Swiss German between “am foifi” (“around five”) and “um di foifi ume” (“around five”).

In shipping and the military, times with the preposition "auf" are also used as directions . The indication “at two o'clock” means the direction corresponding to a dial of an analog clock from the point of view of the direction of travel (“twelve o'clock”), in the example 60 degrees to the right. 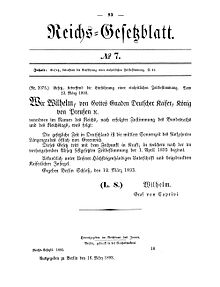 Since the time of noon (or midnight ) is different in places that are not on the same longitude (meridian), each longitude has its own true local time (OZ). This true local time is sufficient as long as clock trips are not made between locations with different local times. With the advent of the railroad , there was a need to synchronize times between different locations . This led to the introduction of time zones . In Germany, on April 1, 1893, the law regarding the introduction of a uniform time determination (RGBl. 1893, p. 93) established the mean solar time of the fifteenth degree of longitude east of Greenwich as legal time. The 15th longitude runs through Görlitz , which is why there is a Meridian monument there.

Another complication is the fact that the orbit of the earth around the sun is not a circle , but an elliptical orbit and the earth's axis is inclined to it. Therefore, the time interval between successive highs of the sun (noon) is not constant from day to day. The local true solar time therefore leads to days of different lengths. In order to achieve days of the same length, a so-called mean solar time of days of the same length is defined, which is used almost everywhere today. The difference between the mean local time and the true local time is called the equation of time . With the mean local time, the highest level of the sun is not always at the same time: The sun is then normally not in the south at noon (12:00 OZ). This also applies to the reference meridian of a time zone and to 12:00 zone time (for locations that are more than about 4 ° - corresponding to a quarter of an hour - from the reference meridian, the sun is never in the south at 12:00 zone time).

In computer networks, the system time is synchronized using the Network Time Protocol , among other things .

The regulations of the time in Germany