The spaces (including blank , blank space , esp. Switzerland. Leerschlag , Eng. Space [ speɪs ] blank [ blæŋk ]) is the demarcation of words or other information within a text. When inserting spaces, there are spaces between words and, in turn , spaces between words (width of spaces between words). By pressing the Leertasteon the computer keyboard a space is entered or set . In the case of a typewriter with which the space bar has been inserted, only the carriage is moved forward by one character position, which results in the desired space between the words. In the lead sentence were Spatien used for the spaces between words.

The standard word spacing (width of the inter-word space ) is a quarter of an square , so a "normal" space is usually a quarter of an square, although this depends on the font used. However, there are also spaces of other widths. For example, a narrow space , for example in abbreviations such as »z. B. « or to group numbers . In the case of normal spaces, the word spacing can be changed with various additional options, for example with justification or with marking by spacing .

Separation of words was not common in ancient texts ( scriptio continua ). The dense arrangement of the text forced the reader to read it carefully and in most cases aloud. The word division was only introduced in the 7th century. The clear spacing between words made it easier to recognize and understand the texts quickly.

Johannes Gutenberg only knew a word distance. He achieved the margin adjustment of the lines in his 42-line Bible with the help of letters of different widths. The word spacing corresponded to the interior ( hallmark ) of the small "n". From then on, typesetters were guided by him.

The invention of the typewriter brought another word spacing. It always corresponded to the same letter width.

If you examine German texts to see how many letters, punctuation marks, word marks and spaces they contain, it turns out that the spaces have the greatest frequency, before E as the most common letter.

Spaces are firstly needed to make a line for justification to stretch. They are also used in abbreviations such as B. used. The spelling of numbers is also used. a. reached with the help of the spaces (e.g. 123 456 789 ). For most fonts, the space between words corresponds roughly to the space that a narrow character (letter or punctuation mark) would take up. The size of the inter-word spaces remains constant in the flutter sentence , while it can vary in the justified sentence.

Three typical errors in the setting of spaces have been given separate names:

Spaces belong to whitespace and are therefore to be regarded as control characters : They generally influence the parsing of any code in all respects by delimiting code blocks. In this sense, this also applies to the pure display of text : The words represent the information units to be read individually for the automatic line break that is common on the computer . Therefore, spaces are always break marks in the text, unless they are protected against them . In addition to the different widths of spaces, there are also protected spaces in web typography, where there is automatic break , at whose position at the end of the line a break is not allowed.

In some cases, word processing programs or operating systems automatically recognize suitable or inappropriate spaces ( autocorrection ), such as spaces at the beginning of paragraphs or in individual words (such as leading spaces in file names ).

In many programming languages ​​and encodings, they are the termination sign of the individual commands - in others, however, they are generally ignored as whitespace: C, for example, uses them, Java does not, HTML ignores them (except in the text), but not the URI code, see below .

In the lead sentence , the word spacing were exclusion generated: Typographic white or blank space was using reactive material ( "non-printing" quarter em wide space bands ) between the printed letters inserted (letters of words, etc.). There were spaces in different widths, e.g. B. also for digit grouping . However, this blank material did not count for the former translator of the " character ", it therefore was not a "blank character " in the modern sense.

Even a typewriter does not actually have a space. Here was originally developed by blank space or blank firing spoken since there is no character is inserted, but only the so-called car one character position before being moved.

In the presentation of the data processing, the space generally is a white space ( whitespace ) .

For the purposes of the line break there are two types of spaces:

ASCII characters and other encodings

The space has the ASCII code 32, Unicode U+0020 . There are special spaces for certain purposes, for example the non-breaking or non-breaking space , in ISO 8859-1 with the character code 160, HTML entity &nbsp; :

The Unicode Symbols for Control Characters block also defines three visual symbols that represent spaces, but are not themselves.

Use in HTML and relatives with CSS

Multiple consecutive spaces in the source text of HTML and similar documents are output as a single space in the page by a web browser if it is not explicitly prevented. This is done with the CSS property white-space and the value pre-wrap ( white-space:pre-wrap).

The typographical white space can be defined here by spacing or blocking or scaling a space using CSS. The CSS property exists for word spacing word-spacingand character spacing letter-spacing; they accept numerical values ​​followed by a dimension such as px, ex, em, rem, pt, ...

Web browsers create line breaks if necessary after spaces, if this is not explicitly prevented. With the help of the CSS property white-space and the value nowrap ( white-space:nowrap), the break after a non-breakable space may be possible. a. be prevented. In HTML 3.2, the nowrap attribute was provided for this, but only for table cells.

TeX provides the following commands for manually setting the spacing between characters :

The large gap a\;band the small negative gap are a\!bonly available in math mode, but not in text mode. There, the space must be a\hspace{-1pt}bspecified using the horizontal spacing (e.g. ).

Spaces in addresses and path information

Since a space cannot appear within URIs and terminates the URI (end of the character string), spaces in e.g. B. Folder or file names recoded in UTF8-compliant manner. The coding consists of the percent sign %and a two-digit hexadecimal value (with multi-byte characters for each byte).

A space is also %20specified. The older encoding application / x-www-form-urlencoded uses a plus sign +.

Example:
The “Please read.pdf” file is on a web server in a folder called “Important documents” .

When the file is downloaded, the correct space is inserted again in its name.

Spaces for local files and folders

Especially in Unix and Unix systems , a backslash can be used in \front of the space to inform the system that a space is part of the path (folder / file name) and does not end the character string.

Another option is to enclose paths with spaces in a pair of double or single quotation marks ( "or ').

In the FAT file system , spaces are actually not permitted in file names, but are written and accepted by some software (example OS / 2 on FAT volumes: EA DATA. SF. This file name for the extended attributes of a volume fulfills the 8.3 length convention, but contains spaces to protect the file from being accessed and changed. With more modern text editors such as Edit.com since MS-DOS version 7.0, such file names can also be read and the files can therefore be edited.). File names shorter than eight letters (and file name extensions shorter than three letters) are padded with spaces from left to right in the directory entries, but these do not belong to the file name.

In the ISO-9660 file system, spaces in file names can be replaced by underscores ("_"). 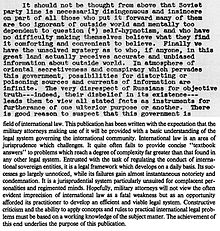 Since the invention of movable type printing, various typographical conventions have developed in languages ​​using the Latin alphabet. French spacing is a convention that regulates the use of white space around punctuation marks. Spaces are inserted around most punctuation marks, while a single space follows the colon, semicolon and at the end of the sentence. Thus, there is no difference in the space between sentences and the words in the sentence.

A different convention is the so-called English spacing . Here, spaces around the punctuation marks are avoided, but an enlarged space is used after colon, semicolon and whole sentences. Particularly the horizontal distance between the block end and -early (Engl. Sentence spacing ) is in English and many others, on the representation in the Latin alphabet languages based not in use and should not with the line spacing (Engl. Line Spacing ) be confused, of the defines vertical space.

This convention has a long tradition. Before the 20th century, it was common in typesetting to use a single but widened space after the end of the sentence. With the introduction of the typewriter, two consecutive spaces were used between sentences to mimic this style of traditional typesetters. This design had emerged as the norm for a long time, especially in the English-speaking world, especially America.

Since then, various design guidelines and typographers have more or less clearly opposed this redundant punctuation.

In detail, there can be perfectly understandable reasons for two spaces at the end of a sentence:

But gradually the consistent use of just one space is also gaining ground in America. But only the editions from the years 2000 and 2008 of the style manual published by the Government Printing Office (GPO) were clearly helpful and recommended not using double spaces at the end of the sentence.

A major reason for this development is that the use of non-proportional fonts in normal correspondence has become rather uncommon. But there are niches. When writing code in a programming language, a font of the same thickness has great advantages over proportional font . Cambridge University employees have devoted themselves to creating a typographical standard for the C # language , following the formatting guidelines of English spacing .

Ultimately, however, the support of one or the other convention remains a matter of taste and is subject to changing fashions. In America in particular, the discussion about “better writing” is far from over, as numerous publications, forums and blogs on the subject show. The following link takes you to a French page with a summary of the differences in typographical conventions between French and English: Mémento de typographie anglaise à l'usage de rédacteurs francophones. Retrieved May 11, 2016 .

In the word processing program LaTeX , the text design can be influenced using the commands \ frenchspacing or \ nonfrenchspacing .

In the example, the different treatment of the empty space after the end points becomes particularly clear. It is also noticeable that the point after "Dr" is recognized as the end of an abbreviation, while "Mr." is not understood as an abbreviation for the English word "Mister" and the point is treated accordingly as an end-of-sentence character with a wider distance from the next capital letter.

(Text display according to the settings of the online LaTeX editor from overleaf.com)