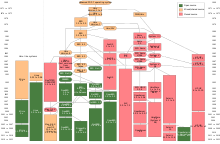 Development of Unix and Unixoid systems, beginning in 1969

A unixoides , Unix-like or Unix-like system is an operating system that tries the behavior of Unix to implement. Until the mid-1990s, reference was made to the reference of the Unix System V product sold by AT&T , with which other software manufacturers remained compatible. In the following, it refers to systems that only partially implement the Open Group's Single UNIX Specification , including the BSD -like systems, or fail to demonstrate full conformity, including Linux .

The introduction to the term is linked to the history of Unix itself. The original Unix operating system, which was developed at Bell Labs in 1969 , was published with its source code. The first further developments, initially only at the universities, were even Unix variants through the use of this source code and could still freely use the term “Unix”. With the start of commercialization of the original line of development from 1979 onwards, the UNIX brand name became more closely monitored ; H. only the licensees were allowed to designate their software as UNIX (for example Siemens Sinix , but not Microsoft Xenix ). Other companies that had developed their operating systems according to the standard of the university Unix variants had to use different names. In the late 1970s and early 1980s, various word creations were created that pointed to the similarity to Unix, for example for systems such as Idris (1978), μnOS (1982), Coherent (1983) and UniFlex (1985). The distinction between the systems based on AT&T sources and linked with the UNIX brand was partly made using the Unix spelling , which differs from the brand name , but this was partly viewed as not sufficiently distinguishable. 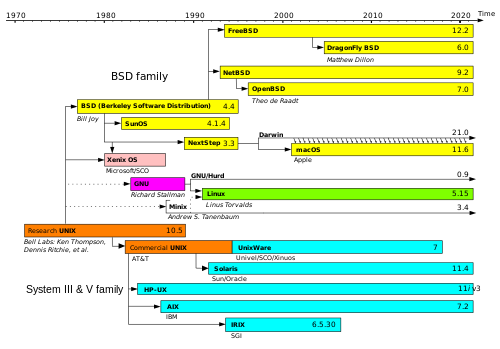 A simplified representation of the history of Unixoid systems. Linux shares both the architecture and concepts (as part of the POSIX standard), but no source code, with Unix or MINIX . Junos , CellOS / PS3 OS and other proprietary spin-offs are not shown .

For recognition purposes, later operating systems that wanted to be Unix-like then increasingly used a proper name ending in -x or -ix, including AIX , A / UX , HP-UX , IRIX , Ultrix , Xenix as well as Minix and Linux . As a result, a spelling "Un * x" emerged for the generic term, which still shows the connective in the form of the ending, but still differs sufficiently from the word mark UNIX (and Unix). When a working group came together at the IEEE in 1985 to describe a defined minimum standard for Unix-like operating systems, they then also used a project title “IEEE-IX” with the same “-ix” ending, and IEEE Standard 1003 published in 1988 for the “ Portable Operating System Interface ” was abbreviated as POSIX (today “POSIX.1”).

The use of the term Unix changed from 1993 when the X / Open Group, a consortium of manufacturers of Unix-like operating systems, bought the UNIX brand name from Novell. The manufacturers had created a specification under the name X / Open Portability Guide (XPG) and allowed companies to have their software certified according to these guidelines. Instead of deriving from the original Unix source code, UNIX now referred to the successful acceptance test, and with the merger of the X / Open Group with the Open Software Foundation (OSF), another manufacturer association of Unix-like systems, UNIX has been used as a test seal since then. The Open Group , created in 1996, developed the test catalog of the “Single UNIX Specification” (SUS for short) and designated the generations with the trademarks UNIX 95 (based on XPG4) and UNIX 98 (for SUS version2 with 64-bit extension). After 1998 the SUS was developed together with the POSIX specification (Austin Group) and resulted in UNIX 03 (SUS Version3, POSIX 2001 edition) - a Unix similarity then relates to these catalogs of requirements.

Although now freely accessible, not all Unix-like systems use the UNIX brand name. On the one hand, free operating systems such as Linux avoided certification for cost reasons, even though they met all requirements. On the other hand, the test specification of the Unix manufacturers is based on System V , which differs in some points from the development of the University of Berkeley - the BSD-based operating systems such as NetBSD , FreeBSD or OpenBSD are not completely SUS-compliant. Current systems such as Linux or GNU Hurd are only Unix-like, but not UNIX-compliant.

There are basically two different categories of Unix operating systems: "genetic" Unices, which are derived from the source code of the original Unix developed by Bell Laboratories , and "functional" Unices, which were developed independently but mimic the way it works.

The hacker and programmer Eric S. Raymond has also proposed a third category so that the classification looks like this:

The classification of a system into the first and last category in particular is not always clearly possible, as these systems can also be combined due to their free licenses and the separation between kernel and userland (see below) that is common with Unix , such as with Gentoo / FreeBSD.

Unixoid systems have a general modularity , which consists in particular in the separation of kernel and user land . Important components of a Unix system are a Unix shell , in particular the Kornshell , the Bourne shell and their free implementation, the Bourne-again shell (bash), and the graphics server X11 . Unix systems offer user administration by default (see also root account and Unix file rights ) and try to map a client-server architecture . They follow the motto “ everything is one file ”, which has led to a standardized directory structure (see also root directory , mounting , filesystem hierarchy standard and daemon ) (see also the articles Unix philosophy and Unix commands ).

The free software movement is also related to Unix systems . Richard Stallman founded the GNU Project in 1983 to replace the loss of the Unix operating system , which was previously freely available at universities as source code , by completely redeveloping the components of the UNIX operating system and releasing them under a free license .

At the beginning of the 1980s, the GNU system was largely completed with the exception of the Hurd kernel and it was used on a wide variety of systems, from the Atari ST to Z80 computers or on the IBM PC systems under MS-DOS , to create a Unix-like working environment. Under MS-DOS the benefit was e.g. B. severely restricted with DJGPP , since the MS-DOS system was in no way multitasking and knew no real pipes .

When Linus Torvalds made his Linux kernel available under the GNU GPL in January 1992 , a completely free operating system could also be used on IBM PC-compatible computers . The GNU variant most frequently used nowadays is therefore the one that uses the Linux kernel and is therefore usually simply called " Linux " for the sake of simplicity . However, the Free Software Foundation , Debian and a few other organizations prefer the designation GNU / Linux to distance themselves from Linux, as they pursue political goals that differ from Linux: while Linus Torvalds belongs to the open source camp, the Free is particularly fighting Software Foundation for the principle of free software . She sees the appropriation of GNU by Linux as a risk that her political message will lose its meaning and attention. The Debian Project expresses by the designation as GNU / Linux that Linux is only one of many possible kernels for GNU. This is particularly evident from the fact that Debian is now also available in a GNU / kFreeBSD variant (with the FreeBSD kernel) and a Debian variant GNU / Hurd (with the GNU Hurd kernel) is in progress.