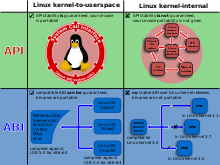 In addition to access to databases or hardware such as hard disk or graphics card , a programming interface can also enable or simplify the creation of components for the graphical user interface . For example, the Windows Application Programming Interface of the Windows operating system enables external companies to develop software for this operating system in the first place.

Classification according to type classes

Programming interfaces can be divided into the following type classes:

Function-oriented programming interfaces only know functions with or without a return value as a means of communication. The concept of handles is almost always used. You call a function and get a handle back. This handle can be used to call other functions until the handle has to be closed again.

File-oriented programming interfaces are beyond the normal file system calls open, read, writeand closeaddressed. If data is to be sent to an object, it is also writewritten; if it is to be received, it is also readread. Under UNIX, this principle is widespread for controlling device drivers.

Classification according to development stages

Having a well-documented programming interface (API) can be a significant competitive advantage for a software or hardware product containing the software - as it enables other software companies or freelance programmers to create additional software for that system. With the offer of additional programs from third-party providers, the attractiveness of the original system, for example a computer operating system, a game console or a smartphone family, increases. The business policy with regard to this interface can thus decide on the commercial success of a software and possibly also the associated hardware. For example, some software providers charge considerable sums of money for the associated, necessary documentation, which represents a barrier to entry for interested programmers. It can also be provided that the API can only be accessed with a software development system that is expensive to acquire .

Another factor for success can be the long-term stability of the API mentioned above, because frequent changes also force the programmer of an additional application to change his software each time so that it continues to work. This can result in a considerable amount of work and thus costs, which makes the development less commercially attractive.

The development environment Xcode , with the API of the smartphone operating system Apple iOS indeed can be accessed is, as a free download, but only for Mac computers from Apple . In addition, developers have to sign a nondisclosure agreement and pay a membership fee, which is considered an obstacle - especially since Apple is facing strong competition in the market for smartphones and mobile apps due to the great success of the Android operating system .

The POSIX standard defined by the IEEE exists for the Unix operating system family . The pricing for documentation for this API is very high, and its publication is prohibited by copyright law. In recent times, there has therefore been a tendency towards the Open Group's single UNIX specification . These standards are open, freely available on the Internet and anyone can submit suggestions.