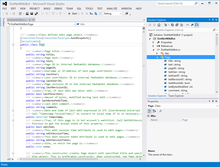 Turbo Pascal from Borland , an IDE from the 1980 / 90s with a character-based user interface 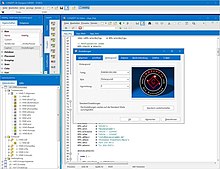 CONZEPT 16 , a database system with an integrated development environment

KDevelop , a free IDE for KDE

IDEs provide helpful tools that relieve the software developer of frequently recurring tasks, offer quick access to individual functions, with which the work (interim) results can be managed and transferred directly to later processing functions. The developer is relieved of formal work and can carry out his actual task, the development / programming of software, efficiently with system support .

Deviating meaning: From the point of view of the system architecture and release management , the term development environment is also understood to distinguish it from other system environments , while here the functionality used for software development (integrated) is meant, regardless of the technical system environment.

The use of only individual programming tools , for example: text editor , compiler or interpreter , linker , possibly a debugger , is considered to be non-integrated, although sometimes called a generalized development environment . The developers have to initiate the individual work steps in a targeted manner. Example: a) Open source code, change / edit, save; b) call compiler, check result; c) call linker, check result; d) Execute program (e.g. for testing).

The integrated aspect , on the other hand, requires more than individual tools that operate separately. Properties / functions of an IDE can be, for example, the following:

Example: The data fields defined for a form or a report via the GUI can be referenced / used directly in the program code editor.

To evaluate an IDE , further "specific criteria for the evaluation of integrated development environments" are described - such as special comfort functions of text editors, automatic compilation and debugging, setting up operating aids such as key combinations or macros, generation functions, etc. v. a. Functionalities. Depending on whether and to what extent these apply to a specific software development product, this can be called an IDE - or not. The boundaries are always fluid.

While the first IDEs were still text-based, the trend, especially among the major providers, was increasingly towards visual programming environments from around 1990 onwards . However, there are still various text IDEs available today, especially for special languages.