A debugger (from English de- ( prefix ; dt. Ent- , aus- ) in the sense of remove and English bug in the sense of program error ) is a tool for diagnosing and finding errors in computer systems , especially in programs , but also in the hardware required for execution . Debugging refers to the activity of diagnosing and finding such errors, be it using a debugger or other methods. 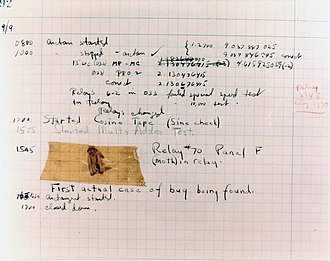 The term "debugging" (to German debug ) is frequently Grace Hopper attributed to a legend that she liked to tell himself that is not quite correct. In 1947, while working on the Mark II, a moth caused a relay on this computer to fail. Grace Hopper's team found the moth and stuck it in the logbook along with the sentence “First actual case of bug being found.” (“The first time that a bug was actually found.”). As a result, the term “debugging” for “troubleshooting” is said to have become established in the team. The term “bug” (for insect, beetle, pest) had been used in English among engineers since the 19th century as a term for malfunctions and was mentioned as slang in Webster's New International Dictionary as early as 1937. With Fix (Engl. Fix for repair, repair) the elimination of a will bug called.

Functions of a debugger

Screenshot of a debugger

Depending on the debugger and the nature of the hardware, it is also possible to receive feedback and error states ( exceptions ) from the target system. Memory access errors, invalid opcodes and command sequences for which input or output variables are questionable, such as an attempted division by zero, are of particular interest here.

A fundamental distinction is made between remote debugging of remote systems and debugging, which is carried out within the processor system to be examined with on-board resources. A special version is remote debugging using a simulation of the target system using a processor simulation and other elements. Debugging a virtual machine represents an intermediate form between the two types, whereby the virtual machine basically has the character of a local application as well as an independent system. Overcoming the processor architecture is at least fundamentally a certain amount of effort. Depending on the design, even clock-accurate determinations of the runtime behavior are possible during debugging. B. a simulation does not necessarily have to run in real time. When simulating semiconductors in the ASIC , FPGA or PLC category , both hardware and software simulations are common tools that are accessible to the developer via a correspondingly special debugger.

Simple troubleshooting at assembler level is possible at any time with a system designed for this purpose. Some high-level languages, such as scripts or various BASIC variants, on the other hand, can often only be examined line-based on the source text level. Extended functionalities, e.g. For example, symbols, structures and function names can be resolved with the presence of symbol information in a special file or embedded in a binary program (e.g. DWARF debug information). Advanced debugger and development systems can still use e.g. B. record data during operation, prepare performance analyzes and visualize concurrent processes.

A debugger is systematically most comparable with what is done in electrical engineering and electronics by the typical measuring devices and aids, e.g. B. a logic tester, a multimeter, an oscilloscope or a signal generator, is available as an option for the commissioning and monitoring of corresponding systems.

Modern debuggers have the option of translating changes to the source text directly during program execution and then continuing the program. This technique is also known as just in time debugging . A debugger is often part of a program development environment .

In addition, a debugger can also be used in reverse engineering to better and more quickly understand external programs by tracing and examining variables.

In object-oriented runtime systems , in parallel programming or in distributed systems , it is very difficult or even impossible in practice to define an exact program sequence. Some development systems therefore forego the use of runtime debuggers, but usually allow the definition of breakpoints at which the status of all variables can be analyzed after the program stop. So -called post-mortem debuggers are also used in this context for exception handling , i.e. after program interruptions that are forced, for example, by an error .

The most important ability of a debugger is to set breakpoints . These make it possible to interrupt its execution at any point in a program and thus enable the register and memory to be examined.

Software breakpoints are most often used, which temporarily change a byte in the program to be examined. This byte is the instruction to trigger a breakpoint interrupt , to stop the program execution when the byte is changed.

However, this option includes the restriction that the program to be examined may not check itself for integrity (for example by checking a checksum , see also cyclical redundancy check ). Malware programmers exploit this weakness of the soft breakpoints, for example, to make the analysis of a malicious program more difficult or even to prevent it.