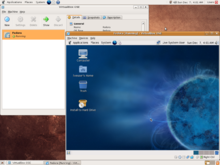 In contrast to emulators , virtual machines are executed directly on the host computer's CPU and usually use the CPU's virtualization functions. Emulators are implemented purely as software, which means that a different computer architecture than that of the host computer can be simulated.

Today, virtual machines are classified according to the extent to which they simulate the functionality of a real computer. System-based virtual machines reproduce a computer so completely that operating systems that were designed for the real computer can be run on the virtual machine in the same way as on the corresponding real computer. This approach is also known as full virtualization . It is essentially based on the definition given by Robert Goldberg and narrowed down by Gerald Popek in 1972:

"A virtual machine is an efficient, identical, and isolated duplicate of a real processor."

→ Main article : Roots of virtualization in the mainframe area

In their 1974 article Formal Requirements for Virtualizable Third Generation Architectures , Gerald J. Popek and Robert P. Goldberg laid the formal foundations and set out the basic requirements for an architecture to support virtual machines with the help of a hypervisor.

The use of system-based virtual machines offers several advantages over the direct execution of operating systems on the computer :

However, these advantages are “bought” with some disadvantages that result from running the operating system directly on the computer:

Loss of efficiency
A virtual machine is less efficient than the real machine, as part of its performance has to be used to operate the hypervisor (to manage the virtual machines).
Mutual influencing of simultaneously operated virtual machines
If several virtual machines are operated in parallel, separation is ensured by the hypervisor, but they share the (limited) resources of the physical computer. Since the load behavior of other virtual machines cannot be foreseen or influenced for an individual VM, peak loads can lead to unstable or unpredictable performance of individual or all simultaneously operated virtual machines if the hypervisor does not take special precautions (e.g. by guaranteeing Resources for individual VMs).
New challenges in terms of security and data protection
Protection mechanisms against viruses and malware were previously implemented at the operating system level and thus protected the user. The use of hypervisors creates a new possibility of attack, namely the hypervisor itself to execute malicious code on the computer. Therefore, new protection mechanisms are required beyond those previously known.
New challenges regarding the licensing of operating systems
While the licensing of an operating system used to be tied to a particular physical computer with its properties (e.g. number of processors, memory size), this is no longer easily possible with virtualization. A computer no longer has to exist with the actual memory size or number of processors; it may only exist virtually. This forces manufacturers and customers to grapple with what are sometimes quite complicated license models. Certain manufacturers (e.g. Apple ) also do not allow their operating systems to be virtualized at all. However, the legal validity of this ban is disputed in Germany.

The use of process-based virtual machines offers the following advantages:

The use of process-based virtual machines has the following disadvantages:

These disadvantages can be reduced by suitable (e.g. dynamic) optimization. Another option is automatic compilation using the ahead-of-time compiler immediately before execution. This means that the back end of a highly optimizing, machine-oriented compiler is executed directly on the user system. As a result, the compiler can carry out even more specific optimizations for the user's system than would be possible with a precompiled program without special optimizations for the user's system or processor.