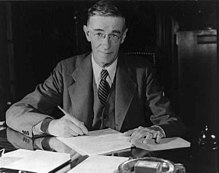 Vannevar Bush [ ˌvæˈniː.vɚ ] KBE (born March 11, 1890 in Everett , Massachusetts , † June 28, 1974 in Belmont , Massachusetts) was an American engineer and analog computer pioneer. Bush was one of the most important figures in US warfare in World War II; in his essay As We May Think, published in 1945, he developed the concept of the memex (memory extender), which is considered a forerunner of the personal computer and hypertext , and whose principle also includes the " Statistical Machine " by Emanuel Goldberg, patented in the USA as early as 1931, was the basis. In addition, Bush is counted among the founders of the military-industrial complex .

As a graduate thesis of his engineering degree at Tufts College , Mass., Bush constructed a device for automatically recording terrain topography, the Profile Tracer , which was patented in 1914. It was Bush's first contribution to analog computing. In 1916, Harvard University and the Massachusetts Institute of Technology (MIT) jointly awarded him a doctorate.

In 1919 Bush was employed as a scientist at MIT, from 1923 as a professor of electrical engineering. There he developed an analog computer for solving differential equations , the Product Integraph, between 1923 and 1927 . Between 1928 and 1931, under the direction of Bush, MIT developed the Differential Analyzer , a project that was later supported by the Rockefeller Foundation . The Rockefeller Differential Analyzer was ready for use from 1942 and was the most powerful calculating machine at the time and the last great innovation before the invention of the first computer by Konrad Zuse .

From 1937, Bush had the Navy Comparator developed at MIT . The following design by Bush, the Rapid Selector , was intended as a machine for managing large amounts of data and scientific work. With Bush's appointment as President of the Carnegie Institution for Science in 1938, the project lost its momentum, but was presented in 1940, patented in 1942, and used in American librarianship during the 1950s.

In 1940 Bush, who advised President Roosevelt as a "Science Adviser", became chairman of the National Defense Research Committee (NDRC) and, in 1941, director of the Office of Scientific Research and Development (OSRD). The OSRD coordinated all military research programs during World War II, including the Manhattan Project to develop the atomic bomb . As an adviser to President Roosevelt in the spring of 1941, Bush promoted the political decision to build the atomic bomb, the technical development of which was accelerated as a result of the Japanese attack on Pearl Harbor in December of the same year. At the same time, however, Bush warned of a nuclear arms race , as it was to be foreseen that the USA would only have a nuclear monopoly for a short time.

Equally consequent as the commitment to the "Manhattan Project" was Bush's development of the " proximity fuse ", a proximity fuse for shells, which greatly enhanced by the complex radio-controlled detonation at the last minute the flight phase, the scattering effect. Bush was also responsible for radar improvement and sonar development, and he helped found the American defense company Raytheon . In the middle of World War II, he received the IEEE Edison Medal not only for his achievements in the new application of mathematics in technology, but also explicitly for his great service to the nation by directing the weapons research program.

At least since the beginning of the Second World War, Bush enjoyed a certain prominent status in the American public. In early 1942, Colliers Weekly ambiguously presented him as " the man who may win or lose the war ", and in 1944 his face was printed on the cover of Time Magazine , which portrayed the engineer as a " general of physics ".

In July 1945, Bush published the essay As we may think in Atlantic Monthly magazine , in which he introduced a fictional machine called Memex (Memory Extender). As we may think already attracted attention back then and is considered to be the first description of an information processing machine as a personal tool and the concept of human-computer interaction . In November, Life Magazine printed an excerpt from the essay and added an illustration to the text that is already vaguely reminiscent of digital desktop environments. Bush's idea, effectively presented in the media, had an inspiring effect on a whole generation of computer scientists, including Douglas C. Engelbart , JCR Licklider and Ivan Sutherland .

However, Bush was not only interested in techniques for linking information, but also in methods of science management. In his report to the President (Science, the Endless Frontier. A Report to the President by Vannevar Bush, Director of the Office of Scientific Research and Development) , published at the same time as As we may think , Bush pleaded for the continuation of the considerably expanded during the war government research funding. Due to the stronger networking between universities, industry and the military, the USA should maintain its technological lead in the expected arms race. Bush biographer GP Zachary counts Bush as one of the spiritual fathers of the "military industrial academic complex" . 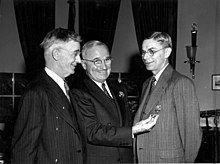 Bush was a member of the Freemasons Association , his lodge Richard C. Maclaurin Lodge (also known as the MIT lodge ) is located in Cambridge, Massachusetts . He held the office of master from the chair there .

The National Science Foundation awards him the Vannevar Bush Award in his honor .

Vannevar Bush is listed in documents that have emerged as a member of the allegedly founded in 1947 but officially unconfirmed US secret committee Majestic 12 .