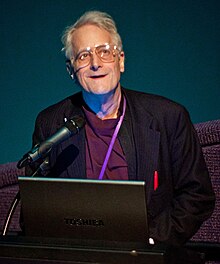 Nelson coined the terms hypertext and hypermedia in 1965 . He is also credited with the first use of the words transclusion , virtuality in the context of software design, intertwingularity (branching) and teledildonics (computer-controlled sex toys for use in cybersex ). The main direction of his work so far has been to make computers easily accessible to normal people. His motto is:

"A user interface should be so simple that a novice can understand it in ten seconds in an emergency."

Nelson advocates the four principles "Most people are idiots, authority is mostly insidious, God does not exist and everything is wrong"

Nelson founded the Xanadu project in 1960 with the aim of building a computer network with a simple user interface. This endeavor is documented in his books Computer Lib / Dream Machines (1974) and Literary Machines (1981). He devoted a large part of his life to working on Project Xanadu and maintaining it.

The Xanadu Project itself failed to thrive for a variety of controversial reasons. Journalist Gary Wolf published a critical article, The Curse of Xanadu , about Nelson and his project in the June 1995 issue of Wired magazine , calling Xanadu "the longest-running vaporware project in the history of computing ." Nelson expressed his outrage on his website, where he called Wolf a "murderous jackal" and threatened to take legal action against him. He also summarized his objections in a letter to Wired and published a detailed refutation of the article.

"HTML is exactly what we tried to PREVENT - constantly dead links, links that only lead to the outside world, quotations that cannot be traced back to their origins, no version management, no rights management."

Nelson co-founded the Itty Bitty Machine Company, a small computer retail business that operated in Evanston, Illinois from 1977 to 1980 . The Itty Bitty Machine Company was one of the few retail outlets that the original Apple I led. In 1978, Nelson had a significant influence on IBM's deliberations when he presented his vision of the potential of personal computers to the team that launched the IBM PC three years later .

In the early 2010s, Ted Nelson worked on a new information structure, ZigZag, which is described on the Xanadu project website, which also hosts two versions of the Xanadu code. He also developed XanaduSpace, a system for exploiting linked parallel documents (an early version of this software can be downloaded for free). He was visiting fellow at Oxford University at the Oxford Internet Institute, where he worked in the fields of information, computers and human-machine interfaces.