The title of this article is ambiguous. Further meanings are listed under Daemon (disambiguation) .

Under Unix or Unix -like systems, a program that runs in the background and provides certain services is referred to as a daemon [ ˈdiːmən ] or daemon (also often in the spelling Demon ) . User interactions only take place indirectly, for example via signals , pipes and, above all, ( network ) sockets . The term daemon is also an abbreviation for d isk a nd e xecution mon itor interpreted, but what a Backronym is.

In Microsoft Windows , the corresponding programs are called services or system services .

Normally daemons are not started by user interaction, but automatically when changing to another runlevel or when the system is started . As a result, daemons represent an essential part of the boot process, since with most Unix derivatives the essential application logic of the operating system runs in the user space and thus in the daemons. Typical daemon programs in Unix operating systems are therefore not just servers - processes such as network services, e-mail servers , database servers and print servers , but also processes that configure or monitor hardware , such as sound daemons or removable media management daemons . Periodic tasks or tasks occurring at set times are also implemented using daemons.

However, daemons can also be started by a user like normal processes in a shell . These processes then fork and in this way create a process that is no longer connected to the calling shell and thus becomes a direct child process of the main process init . In practice many daemons be constructed so that it via command line parameters either both backward ( detached can walk) and in the foreground, d. H. in the context of the shell. Log outputs are then often output on the standard output.

To denote their daemon character, the name of many such programs has an appended "d", for example syslog d or cups d .

The daemon as a logo 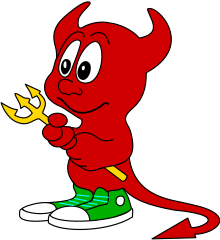 In allusion to a demon , the BSD - Unix derivatives have made such a logo. The figure contains some imagery that characterizes Daemons. It was chosen as the logo for these Unix derivatives because daemons are a central operating system component.

The BSD derivatives FreeBSD and NetBSD also originally took over the daemon, but in the meantime all derivatives have switched to an alternative or modified logo.