This article covers a concept of information technology. Further meanings under server (disambiguation) .

In information technology , a server ( English server , literally servant or servant , in the broader sense also service ) is a computer program or a device that provides functionalities for other programs or devices (" clients "). This architecture is known as the client-server model .

A server as software is a program that is in the client-server model (English for another program, the client customer ) communicates. As a result, the client can use certain functions provided by the server software, for example utility programs, network services , access to a file system or a database .

A hardware server , see host computer , is a computer on which one or more servers (software) run.

History of the term server

The computers on which the first servers were programmed were called hosts (see host-terminal principle ). At that time, hosts were almost exclusively special, powerful computers ( mainframes ). As the performance of standard computers increased, certain server services could also be provided by them. These services were only provided by the computer on which the server software was running. Therefore, the term server expanded from software to hardware, i.e. to the host. This concept formation was adopted in the advertising for computer hardware and also by trade magazines, which established the term very quickly in everyday language. 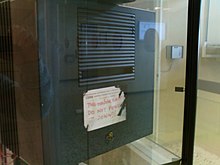 The first server of the World Wide Web at CERN . A sticker indicates that this is a server and that it should not be shut down.

This ambiguity of the term server leads to confusion in some cases, as the term is often used in a form in which it is difficult, especially for laypeople, to determine whether the hardware or the software aspect is meant.

The term host is the EDP early in the 1960s in connection with mainframes or mid-range systems and there usual time-sharing or multi-user - operating systems used. These systems are highly structured and essentially consist of a central unit, which is also known as the host and houses all of the “intelligence”, and the “stupid” terminals that are only used as user terminals at the workstations and practically only for input and output Data serve. The term server, which is often used as a synonym , is more recent and comes from the field of personal computers and operating systems such as Banyan Vines , Mac OS , Netware or Unix . When the networking of this computer class found its way into practically everywhere at the end of the 1980s, an alternative name was sought to distinguish it from the existing host-based architectures and the term server was established for this . The dedicated NetWare server is a representative example . The architectures based on personal computers typically do not have "intelligent" hosts in contrast to "stupid" terminals, here every system is equipped with more or less "intelligence". In this context, computer systems ( hardware and software ) that essentially provide services to other systems (see server (software) ) are referred to as servers . In the Unix environment, the differentiation is clearer at this time; Here (mostly graphic) workstations and workstation operating systems and their software are distinguished from (mostly console- based) servers and server operating systems with associated software. In the meantime, however, both expressions - at least colloquially and in connection with hardware - are practically synonymous.

Server as a term for software and client-server concept

In the original meaning of the word in the computer science , a server is a computer program comprising a service (engl. Service) offering. As part of the client-server model , another program, the client (“customer”), can use this service. Client and server typically run as programs on different computers, more rarely on the same computer.

The server is ready to react at any time to a client being contacted. The rules of communication (format, call of the server and the meaning of the data exchanged between server and client) are called protocol ; these rules are defined for one service.

In general, the concept can be expanded to a group of servers that offer a group of services, examples: mail server, (extended) web server, application server, database server.

Since in practice servers usually run collectively on certain computers, it has become common practice to refer to these computers as servers. The same examples: mail server , web server or application server .

In parlance for software servers and clients, it has become common to ascribe to them the capabilities that are actually provided by the hardware. In this language usage, for example, the client software makes contact with the server software, although it is only enabled to do so by the hardware. So one completely abstracts from the way in which the connection is realized technically and from which and how many computers are involved in this result. For example, both (client and server) can be on the same computer, connected via a cable or via the Internet.

Server as a term for hardware

The term server as hardware is used:

The monitoring and maintenance of a server is an important activity in every company. So-called network monitoring systems are often used .

The simplest case of a server is that in which exactly one server software is installed on a host .

If the performance of a single host is not sufficient to cope with the tasks of a server, several hosts can be interconnected to form a network, which is also called a computer cluster. For this purpose, software is installed on all hosts that causes this cluster to appear to the clients as a single server. The user, who is connected to the server via his client, does not know which host processes which part of his job. The server is then a distributed system .

There is also the reverse case, in which several software servers are installed on a usually powerful host. What remains hidden from users is that the various services are actually handled by a single host.

Both arrangements are known as virtual servers. A distinction must be made between virtual hosts and virtual servers (software) . There are different types of virtualization.

A dedicated (English dedicated [...] , dt. Literally dedicated , determined or assigned ) server is a server or an independent device that is intended for a network service or several permanently operated services, and not incidentally for other tasks, such as a workstation, is being used. In the marketing of server housing providers, bare metal server offers are used under similar terms to English , in which a customer is leased the exclusive right to use a single physical device, often combined with full access to the physical hardware down to the level of BIOS settings and the choice of certain hardware components, and the customer does not have to share this physical server hardware with other customers and their services as with virtual servers. Usually, dedicated servers with a large number of similar devices are located together in a data center .

A shared server (English shared [...] , dt. Dividing or proportionally ) is a server that is not exclusively a customer or a specific task is available. In marketing, it is used to implement a cheaper tariff for an individual customer compared to the exclusively used dedicated server (see above). In practice, even when a single server is used by several customers who, for example, operate their Internet presence on it , temporary load peaks are partially offset by load balancing on the part of the operator. They therefore do not necessarily lead to performance losses such as long website loading times, which can put the theoretical disadvantage compared to dedicated servers into perspective.

See also : "Types of Hosting" in the article: Web Hosting

The Internet are UNIX -like open-source - distributions such as Linux and FreeBSD the dominant operating systems among servers, with Windows Server also has certain proportion. Proprietary operating systems such as z / OS and MacOS Server are also provided, but in much fewer numbers. In company also, among other things yet to come AIX , HP-UX and Oracle Solaris are used.