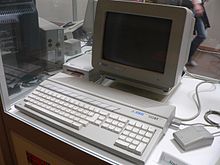 Atari ST is a series of home and personal computers by Atari Corporation , which was produced from 1985 to 1994. The GEM graphical user interface made the ST series suitable for professional office applications, among other things, and became the standard computer in small and large recording studios due to the standard MIDI interface . The abbreviation “ST” stands for Sixteen / Thirty-Two (16/32), since the main processor used , the Motorola 68000 , has a 16-bit data bus and works internally with 32 bits.

The ST series was an alternative to the much more expensive Apple Macintosh models and was in direct competition with IBM PC-compatible computers and the Amiga series from Commodore .

The only exceptions were the 260ST (was delivered with 512 KiB) and the 520ST + (1 MiB). The 260ST should - true to its name - only be delivered with 256 KiB, but in the final phase of development it turned out that 256 KiB would definitely not be enough to operate the computer sensibly with TOS . However, since the advertising had already started, it was delivered with 512 KiB without further ado. As with the first American 520ST, the first 260ST available in Europe had the TOS reloaded from floppy disk, which greatly reduced the size of the available memory. The 260ST was hardly any different from the 520ST. Actually the only difference was that the 520ST brought the TOS in read-only memory (ROM), whereby the first 520ST and ST + were delivered without such memory modules because they were not yet available at the product launch. Retrofitting was also easy on the 260ST, as the base was already there. The original 520ST disappeared from the market just six months after its appearance, followed a year later by the 260ST. In 1989, all STs without floppy disk drives and the 1040STF were discontinued, at the end of 1990 the MegaST and in January 1994 all other devices (at that time the model range consisted of the 1040STFM, 1040STE , MegaSTE and the high-end computers Falcon 030 and TT 030 ).

The concept changes after completion of the development phase can also be seen in the 520ST + model. There was no space for the additional memory modules on the motherboard , so they had to be soldered piggyback by hand onto the memory circuits of the regular assembly. Individual pins ( RAS , CAS ) of these additional circuits were bent upwards and freely wired.

Additional letters indicated further features: "F" in the name indicated an internal floppy disk drive, "M" an HF modulator . “+” Meant a memory expansion (520ST +) or other expansion like the unpublished 1040 STE +. "E" comes from enhanced , these computers were expanded to include a number of functions, for example the ability to reproduce sounds on 2 channels and a color palette expanded to 4096 colors . The models "LST" (Stacy) and "NST" (ST Book) denote portable devices.

The software emulator CPMZ80 for the Zilog-Z80 main processor and the operating system CP / M 2.2 were supplied free of charge by Atari. This enabled the 8-bit programs for CP / M, such as B. WordStar , dBASE , Microsoft Multiplan , Turbo Pascal and others on which Atari ST will continue to be used, and the documents, databases, sources and data created with these programs can still be used.

The MegaST series had a remote keyboard and a main memory of up to 4 MiB. Hard disk drives were also available (initially with the MFM process and 20 MB) and could be connected directly to the Atari ST ( DMA port, also called ACSI port ( SCSI variant, stands for "Atari Computer System Interface")).

The widespread monochrome monitor SM124 had a resolution of 640 × 400 pixels at a refresh rate of 70 Hz . These were excellent values ​​for the time. In the area of IBM PC-compatible computers there were CGA , HGC and, for particularly expensive computers, EGA , which only offered 640 × 350 pixels and 60 Hz refresh rate. The successor models SM125 and SM14x also displayed 640 × 400 in 70 Hz.

The computer became particularly popular in the CAD or desktop publishing sector, especially when Atari and other manufacturers brought the high-resolution 19 ″ monochrome monitors onto the market. In the German-speaking countries, office applications such as word processing or spreadsheets also predominated . In particular for the natural sciences and for classical philology (ancient Greek, Hebrew, special characters that are critical of the text, transcriptions, etc.), the Signum! a software was available that had almost unique selling points during this time.

In the United States, the ST was mainly used with a color monitor and was more of a game and demo machine (see: Atari ST demo scene ). A built-in MIDI interface made the Atari ST widely used by musicians and recording studios around the world . This also included Mike Oldfield , who mainly used the Atari ST for the arrangements of his songs. On the album Earth Moving , the use of the Atari ST was stated on the back of the cover. Also Depeche Mode and Fleetwood Mac used the ST at this time. In addition, the Atari ST was, so to speak, a mediator between the worlds. The file system of the floppy disks was largely compatible with that of MS-DOS , so that, for example, one had access to text files that were created on a PC. There was also a Apple - emulator and a CP / M and Z80 emulator, and he was - provided with appropriate software - as an intelligent terminal and developer station at various mainframes and mini-computers from Hewlett-Packard and workstations from Texas Instruments and Hewlett -Packard used. What was remarkable about the operating system of the ST family was the variety of interfaces provided. From the beginning, the connection of graphics tablets and cameras was intended, which was unique at the time, especially since the corresponding hardware was not available on the market at all.

The Atari ST was for three times as expensive in 1984 Apple Macintosh affordable for broad masses Alternative and was in competition for a little later on the market have come Amiga from Commodore .

Several specialist journals such as ST-Computer , ST-Format , ST Magazin , TOS , XEST , ATOS , 68000er or Atari Inside provided users with information on this computer.

The following are standard features of all ST variants:

Interfaces of the Atari 520ST

Peripherals / extensions from other manufacturers (selection)

Further use of Atari ST data on current computers

A wealth of emulators for Atari ST are circulating on the Internet . Most of these emulators, however, require an image of original Atari ROMs for their function, so for licensing reasons they may only be used if the owner of the computer is also the owner of an Atari ST (or his ROMs). The legal solution is to use post-programmed, freely available TOS versions such as EmuTOS.

Atari floppy disks can usually be read by a PC (or an older Apple Macintosh ). However, difficulties arise with umlauts in path and file names due to the different character sets as well as higher formatted floppy disks (i.e. with more than 80 tracks and / or more than 9 sectors per track); these only work reliably with an original Atari computer and must therefore be copied over. If no corresponding Atari computer is available, this can be done e.g. As with the live CD of ARAnyM done. This way, which is unproblematic in terms of licensing and does not require any installation on the “host PC”, makes it possible to read older Atari diskette formats on PC hardware and to copy the files to DOS-formatted diskettes. Another possibility: 2DD disks, which are formatted under MS-DOS with the command format a: / u / f: 720 , can be read and written by the Atari as well as by Windows and therefore serve as a transport medium between the two computer worlds. Windows XP supports the parameter 720: / f no more, so you have to on format / t: 80 / n: 9a: dodge.

Since current PCs do not have a floppy disk drive, there are still solutions to either burn the data to CD, retrofit a floppy disk drive or connect a USB drive, removable media such as ZIP , JAZ or DVD-RAM drives, memory cards such as CF and SD (the Atari can read and write PC-compatible hard and removable disks and memory cards with suitable software such as the HDDRiver or BIGDOS) or to connect the Atari and the current computer to the Atari using a network card (EtherNEC or EtherNEA) and usually an existing network connection.

Hatari is an open source emulator .

A professional Atari emulator for Apple Macintosh is MagiC Mac (X). This emulator provides Calamus u. a. a printer interface is available so that Calamus can recognize and address any printer installed on the Apple side. However, this printer driver no longer works on the Intel MagicMac version. Calamus SL users make do with the PDF export and then print out the generated PDF files under OS X.

The counterpart MagiC PC is available for Windows operating systems . The STemulator runs on Windows 7-32 bit.

For the Apple computers Performa 450 , 475 and 630 there was also (1995) a MagicMac-compatible interface card with Mac STout , which retrofitted the parallel (Centronics / printer) interface and a serial interface with original Atari chips that did not exist on the Macintosh . In connection with MagiC Mac, programs such as Wordplus, Signum! , Script or Calamus print with PC printers, and Atari programs ran on the Macintosh at about four times the speed of an Atari TT . McSTout also existed in a variant that also provided MIDI ports.