Short game in Enigma, which demonstrates the memory-like gameplay of Oxyd

Oxide is a by Meinolf Amekudzi (born Schneider) for the Atari ST developed computer game , the memory -like puzzles offers.

With the mouse, the player controls a black marble through labyrinth-like levels, called “landscapes” in the game. If the ball hits a so-called "oxide stone", it opens and shows a symbol. If it hits the next one, the previous one closes again if the two symbols were not identical. If two Oxyd stones with the same symbol are opened one after the other, they remain open. A level is solved when all pairs of stones it contains have been opened. Numerous obstacles (abysses, walls, ice and water surfaces, etc.) as well as the simulated inertia of the marble make access to the Oxyd stones difficult and must be overcome partly through a creative combination of play elements, partly through skillful mouse control .

Every tenth level is a so-called meditation landscape. These levels are solved by placing four smaller balls, which can be controlled with the mouse at the same time, in one hollow each.

Oxyd and its successor Oxyd 2 can also be played on two computers via null modem , modem or the MIDI interface of the Atari ST. One player controls the black marble, the other a white marble. The two players do not compete against each other, but solve the landscapes together; There are usually game elements in it that can only be operated by the black or white marble.

Oxyd was the first game from Schneider's company Dongleware GmbH. It was freely distributed as shareware with a restriction to twenty of the two hundred landscapes. The activation codes required to continue playing were recorded in a code book available for 60 DM , which thus acted as a kind of dongle copy protection and also contained useful game tips. The game was first developed with Megamax Modula-2 on Atari-ST systems.

Oxide (1990) and oxide 2 (1991) were developed on the Schneider also, but from Application Systems Heidelberg sold Esprit built (1989), but offered in addition to the two-player mode, a larger number of game elements. In 1992 Oxyd was ported with minor changes under the name Oxyd General Edition for MS-DOS, Amiga and Macintosh computers.

Oxyd magnum was released in 1993 for Atari ST , Amiga , Macintosh and MS-DOS . In this game, the code book and the two-player mode were dispensed with. Oxyd 2 appeared in 1995 in a newly programmed and optically revised version under the name Per.Oxyd for MS-DOS and Macintosh. Per.Oxyd offered an additional game mode in which the two-player landscapes could be solved by one player alone. Oxyd extra was released in 1996 for MS-DOS and Macintosh.

In 2002 the distribution of Oxyd games was stopped by Dongleware Verlag, the series became abandonware .

In 2005 there was a new edition of the game Oxyd, which had previously been released for MS-DOS, especially for Microsoft Windows. This version, developed by Jens Duttke in collaboration with Mad Data and published as freeware , offers ten new single-player landscapes as well as the possibility of playing Oxyd in the local network with two computers. 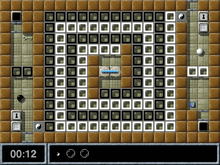 A technically identical open source version of Oxyd was published under the GNU General Public License (GPL) as Enigma . As a special feature, Enigma can process the landscape data of the original versions of Oxyd, Per.Oxyd, Oxyd magnum and Oxyd extra directly and reproduce most of the levels functionally correctly. In addition, Enigma offers the possibility to write your own landscapes in the scripting language Lua . In the meantime, over 1000 landscapes of varying complexity have been created for Enigma. A special feature are those levels that are based on the game Sokoban . A lot of sensitivity in the controls is required of the player. Enigma does not yet offer a true two-player mode over the network.
An unofficial port of Enigma for Android has been available since November 2011 , in which the ball is controlled using inclination sensors.

At Gamescom 2017, Oxyd inventor Meinolf Amekudzi announced that he is in the process of developing his classic for the web browser. In addition to the old levels, a multiplayer mode is planned, possibly for up to 8 players at the same time. There should also be a level editor. Amekudzi wants to offer this game completely free of charge. According to Amekudzi, it should appear in 2017.