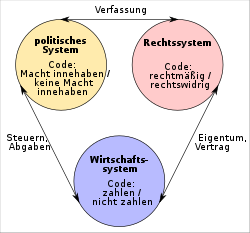 The philosophy of science and sociologist Niklas Luhmann understands structural coupling in his functional-structuralist systems theory as the non- ontological relationship between systems .

According to Luhmann, social systems are operationally closed and cognitively open. Operative unity is the prerequisite for cognitive openness. This cognitive opening in turn enables the structural coupling. Luhmann adopts this concept of structural coupling from Humberto Maturana , who draws attention to the fact that nervous systems have no direct environmental contact, but can only fall back on their own processes. All elements that make up social systems (communication) create 'themselves'.

“Structural coupling” solves the problem that self-referential (autopoietic) systems cannot operate in their environment, i.e. not within other systems , but apparently coordinated developments can be observed. According to Luhmann, this mutual coordination of different systems cannot be the result of penetrative causalities , for which the systems would have to operate outside their “code” (which constitutes the system-environment boundary), which according to Luhmann's definition they cannot.

"Structural coupling" between systems and their environment occurs when the respective system builds up expectation structures that make it more sensitive to certain irritations. For example, the political system cannot observe (“read”) all information in the medium “money” (code: “payment | non-payment”, economic system ) because its code is that of “government | opposition” (= non-government) (i.e. " Power ") is. But it can create aggregation data (such as the GNP , the tax rate or the government deficit), which irritates (sensitizes) it. A high government deficit is then registered as "power" relevant, meaning that the irritation is converted into information in the system's own code . These processes generate structural drift , i.e. a differentiating development of different systems, which looks as if mutual interventions had taken place.

Oliver Jahraus (2001) describes the “structural coupling” of consciousness (psychic system) and communication (social system) with the metaphor of two clocks placed next to each other that are equipped so that each only ticks when it is triggered by a sensor Ticking of the other clock registered.