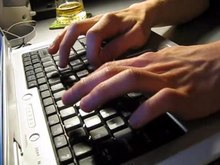 Play media file
One common computer input device: a keyboard . A user presses keys and sends information to the computer.

As input devices are all devices referred to, on the one computer information can be supplied, so that interaction with the computer programs is possible. Input devices, specifically for computer or console games are used, are often used as game controller (Engl. Game controller ), respectively. Some input devices are also called Human Interface Devices (HID). Special input devices are used in professional emulation scenarios , for example in simulators constructed for training purposes , in recording studios or at editing stations . The specific operating elements are simulated realistically, but are only used to enter parameters for software .

In information technology , a logical device console was defined, via which the data streams were read into the processing processes. The console receives the data from the input device.

The counterpart to the input devices are output devices that make the results of an operation or a program accessible to the outside world.

The technical devices for input have changed over time. In the early days, input signals were generated by means of switches ; later on, relays were used to make switching that generated signals. For a long time, the punch card was the classic input medium in developing data processing. The punch card reader is the input device for this medium. Another medium of this time is the punched tape . In order to produce punched tape, the information was typed on a keyboard while a punched tape punch machine generated the tape. This was read in using a punched tape reader. Only in the next step was the keyboard connected directly or indirectly to the data processing device. This made the keyboard a classic input device.

A graphics tablet is an input device specially designed for drawing on the screen, which consists of a base (the tablet itself) and a pointing device - usually a pen ( stylus ) or a mouse with a crosshair ( puck ). The functionality is similar to that of a mouse, but is tailored to the behavior of a classic drawing tool and therefore has additional options such as pressure or tilt sensitivity. In addition, it is not the relative movement of the pointing device that is recognized, but the exact position on the tablet, which enables the precise tracing of a template.